Here's another one. These guys are small enough that you can still do several before Christmas. For any new tatters that haven't learned split rings yet, just tat the basic daisy and tie it off. Then join in your CTM threads where the arrow shows the next row starting and carry on. CTM continuous thread method, where you wind the first shuttle, pull thread off the ball cut it and wind the cut end onto a second shuttle. The thread between the shuttles is continuous.

Just in case you were wondering why the snowflakes look a little wonky, the snowflakes haven't been properly finished. I didn't hide ends or block the tatting. I was using up left over ends from my Christmas card tatting and occasionally just knotted the ends of the scrap thread together, which makes for some very rough looking lace! 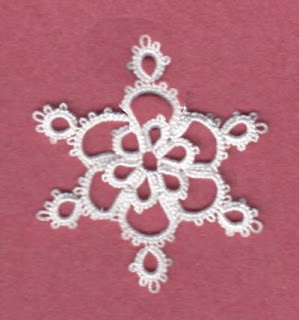 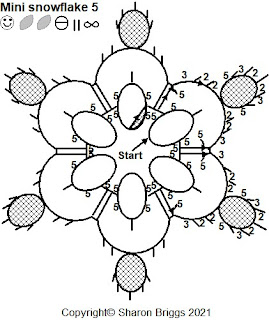