I agonized forever over what to make for my nephew's upcoming wedding. I decided that since people are going more for digital pictures rather than print photos that a picture album was redundant. I finally settled on doing edgings for some placemats.

The Mikasa china pattern they have selected is Love Story which is very romantic and has a stylized heart. 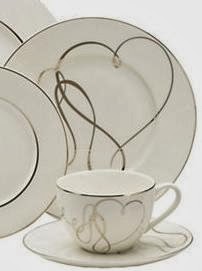 I chose to use a simple dimpled ring edging. See all this? 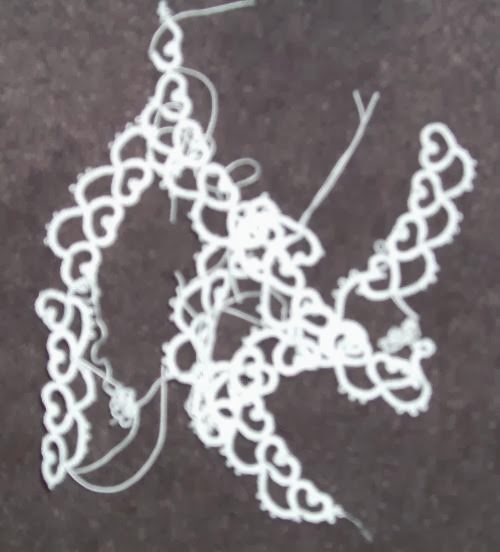 No, I didn't have trouble with the thread. I didn't have difficulty closing the dimpled rings. I didn't make a miscount and have to cut it off. What I did have, was difficulty finding some plain but elegant placemats. Knowing that I had a lot of tatting to do, I just started tatting and when it looked like it was long enough, I just left ends long enough to make a few more repeats and started again.

None of the stores I tried had placemats. They had plastic crap. They had wooden junk. They had printed ones and patterned ones. They had ones in really hideous colours. I was looking for something neutral like a plain cream or ecru and I couldn't find them anywhere. Just when I was about to give up I found them. I wanted a nice formal, linen look fabric, double sided so that I could blind stitch along the edges to attach the lace.

The little pieces? that's where I overestimated the length and had to cut it shorter. Cut shorter, undo the last 2 dimpled rings to get rid of the joining picot, tat the last ring without the joining picot, finish it off and sew in the ends. If I had had the mats to measure it would have been easier because it turned out that on a couple of them, where I had to undo ended up right where I had added in more thread so I had to back up even further, add more thread and re-tat to the end, just to get rid of the bump from the joining picot that wasn't needed.

Dimpled rings while cute and matching their china pattern are kind of plain by themselves.

I don't like giving people high upkeep tatting. I know that they'll use it a few times and then just give up on it because it's just too much work to keep it nice. The picots on this edging are all on the chains where they can't be seen. There are 3 picots on each chain and they're all sewn into the seam along the edge. Machine wash the placemats and just pull the edging out for minimal fuss.

Still, it looks kind of plain. So I thought a tatted heart in the corner might be a good choice. In going through my designs, there were some that worked out too large and some were too small, while others left open areas that I thought might be problematic. I could envision a knife or fork sliding under the lace and tearing so I wanted to make sure I didn't use too open a pattern.

I didn't want them all to be the same, so I chose different hearts all about the same size. I chose to put them in the upper left corner, because I thought that would be safest. In tatting them, I eliminated a lot ot the picots because I didn't want to have a lot of picots to sew down and I didn't want loose picots that could curl and need blocking every time the placemats were washed. I've blind stitched the hearts onto the top layer of the mat and hopefully I've tacked down all of the bits that might cause problems. I even tacked down each row of the rose so that the silverware can't get caught in it.

At any rate whatever problem it might be, is not longer mine. The recipients can deal with it. Or not. At this point, I'm done. May hands are hurting from tatting and from struggling with a curved needle trying to stitch down all of the picots of the edgings through the thick fabric. My thumbs are aching and now I get to go shovel more snow. O Joy! 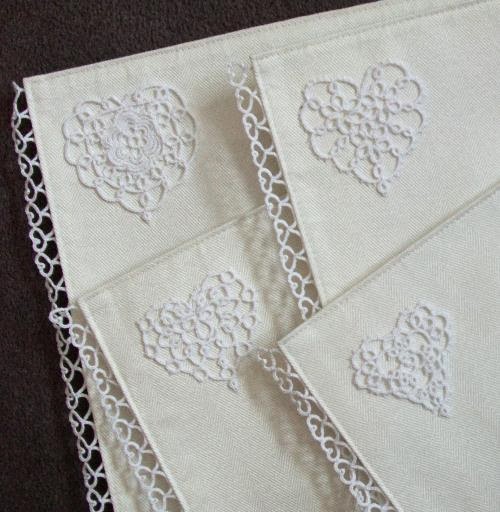 It's hard to get a good picture when it's white on off white, but you get the general idea. Hopefully they will appreciate them and not use them under the dog's dishes.