I'm in  designing limbo. I have lots of thing that need doing that I'm just not taking the time to do right now. Plus I have lots of things I want to design that aren't working the way I want them to. One of the designs that I am determined to get done is a 3D pattern that just isn't working out to my satisfaction. My criteria is that it has to be readily recognizable. It has to hold it's shape without support. It needs to have the minimum amount of tatting to acheive all of these things. What is irritating me about it, is that each permutation of the design takes about 10 hours of tatting, just to get to the point where I know that the design isn't going to work. That means that it isn't a quick tat and after 5 tries, I'm no further ahead, and it's getting frustrating.

On the other hand, I needed a new cross pattern and this one whipped out as fast as I could tat it. This one is done in size 50 or 60 thread, but this one didn't get labelled so I don't know which it is. I did 4 pattern repeats on the short arms and 6 on the long one. I ended up with an empty space in the middle and added a 4 ring motif, but if I was doing it again I'd just throw them off the chains in the middle. 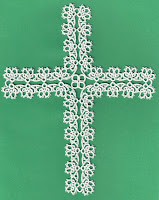 Since it will soon be Easter and time for tatted crosses, I thought you might like the pattern so here it is. I'm running out of hours so I haven't even proofread it yet so there might be something wonky, just so you know. 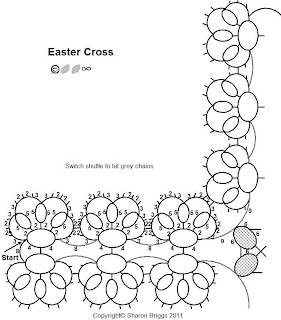 I went to the doctor's with my sweetie this morning. That was after I ran out and shovelled the drive so that he wouldn't try it. We had already stored the shovels and were talking about seeding the lawn yesterday, where did this stuff come from? 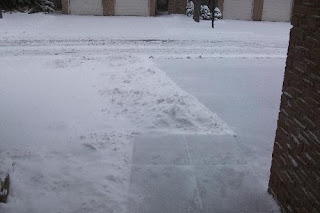 Anyway, the reason for both the doctor visit and my concern about him shovelling are some torn bicep tendons with a 4 cm separation. Last summer he swung his arms to catch his balance and felt something pop. His arm was bruised and felt tender for a few days but it seemed to heal up and he didn't think much more about it. Then some time later he noticed a soft lump below where his muscle should be and after a while we thought he ought to get it checked out. The doctor thought it might just be some fatty tissue, but sent him for some tests. We got the results yesterday letting us know it was a torn tendon and we were in this morning to see about a referral to an orthopaedic surgeon.

I forgot to bring my tatting. I tried pulling a hair to tat with, but as my hair was braided it wouldn't pull without breaking. Fortunately before I went bald we were in to see the doctor. Now it's just a matter of wait and see. Apparently the specialists are getting so specialized they only deal with certain types of surgeries.
Posted by Sharon at 11:43 AM 4 comments:

I haven't dropped off the face of the earth and I have been tatting, just not tatting things I can show. I've been test tatting the motifs from the Design-Tat class. 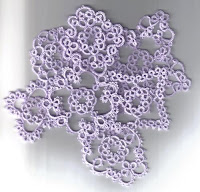 I've also been doing a lot of creative work for a new book. Sadly, most of it is a jumble of cut off thread and hours upon hours of tatting just to find out what doesn't work. As soon as I have them done right I'll do them again in the right colours. 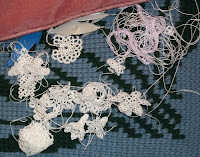 Of course hours spent in the garage waiting while they work on the car makes for lots of tatting time.For the first time ever, the car didn't pass the e-test. It's a 23 year old car that hubby has kept in immaculate condition. I kid you not, he shampoos the engine. The top of the engine block is the same shiny aluminum it was when it rolled off the assembly line, so we were really surprised when it didn't pass the test. So it went into the shop for a diagnostic. We knew when one of the fuel injectors failed in the fall that another one of them was not at full capacity, so we assumed that was the problem, but the test suggested a vacuum leak. Hubby asked the mechanic if it might be the catalytic converter but he said no, definitely not. So we (we, meaning hubby, I just stand around and act as a third hand) changed the faulty fuel injector, tightened all the hoses and clamps and tested for leaks before taking it back for another e-test. It failed again, although just barely. It went back for another diagnostic. No vacuum leaks and no indication why it shouldn't pass, but there was a smell of gas. On further discussion with the mechanic it was suggested it might be the catalytic converter. It was, but it took trying several shops to get one for a 1988 Z24, and several other shops to get one that could put it on right away. Once that was done it passed the test with 0 emissions. Good old car. 300,000 km and it has more get up and go than most new vehicles. We're going to hate to part with it, but they don't make parts for it any more and you can't even get parts from the junk yard for it, so it's days are numbered.
Posted by Sharon at 7:08 PM 2 comments: