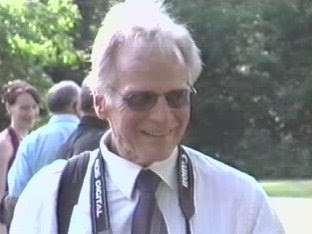 Thankfully the car door didn't do any damage to my hand. Rob's first word after finding out that my hand still moved was to ask if I'd be able to tat. It's good to see we have our priorities straight :-) So I am still tatting. Here's another wee peek at a bit of something going into the newsletter.


I know the picture is blurry, it's from the web cam and I'm too busy to go get the digital camera, but you won't guess what it is anyway.
Posted by Sharon at 3:32 PM 3 comments:

I had a "fun" time yesterday. Hubby was diagnosed with Menieres and made a scheduled visit to the hospital for a check up. He way too dizzy to drive, (I don't drive) so we took a taxi. While waiting for the interminable tests to be done I had an opportunity to talk to a lady whose friend did lace of some sort, but she didn't know what kind. Then an older gentleman who had been watching us throughout our discussion walked over and introduced himself saying his wife was a tatter. It turns out his wife is Joyce Harper and I was in a round robin with her several years ago. We had a nice little chat before hubby and I had to change rooms for yet another test. I took my big craft bag full of a change of clothes for hubby and I and all my tatting supplies, but got very little tatting time in.
After we were done we called a cab to go home. When the cab came it was a van and hubby opened the door for me to get in. My bag got stuck of the armrest and I put my hand on the outside of the van to keep my balance while I twisted around to untangle an pull my bag in. Meanwhile the driver, finally figuring that he ought to do something other than sitting like a bump on a log decided to get out of the van. He opened the door which pushed my hand off the door and as I used my left hand to brace myself to pull all the stuff over my left shoulder my fingers went around the frame between the front and back door and the driver slammed the door shut. All four fingers inside. OUCH! After we got home I made a quick trip to the doctor's for x-rays. Nothing broken, just swollen and the important thing is, I can still tat.

You would think from the amount of blogging that I get done that I don't do anything. I'm actually online and blogging quite a bit, just not here. Most of my time is spent in the 25 Motif Challenge blog keeping it up to date. In between I try to keep on top of designing new things for the Tatted Lace Pattern Collection which I publish. I'm behind with getting it out, but in my defense I did manage to get the challenge kicked off for another year. At least I think I have, I'm still trying to get a couple of things going. Before I made any changes I wanted to write to the affected participants so they knew what was happening. It was an extra step and more work, but one I thought was necessary.
I'm still working on the goodies for the newsletter and part of the delay is that I wanted to add a few more flowers made with different threads to the bunch already pictured. I can't get the newsletter done until I can take these off my blocking board. So here is the same picture with a few more added at the bottom.
Manuela is a nice crisp 6 cord thread that's nice to work with that's a little less shiny that the Olympus, but shinier that the Flora. That means that in my opinion, the Olympus slides easier and the Flora less easy and the Manuela is right in the middle. They are all nice threads to work with, but if you are making a doily or any larger project, Manuela comes in a 50 gram ball, Flora in a 25 gram ball and Olympus in a 10 gram ball. That means that for an average size doily, (12 inches across) you could use 1 ball of Manuela, 2 balls of Flora or 5 balls of Olympus. I'm just throwing this information out there so that a beginner has some useful information on purchasing threads.
DMC Cebelia size 30 is a 3 strand thread slick, shiny and soft. Its a nice thread to work with that slides easily Cebelia and Coats Opera are comparable threads. they are both 3 strand soft threads that are nice to work with. The don't take well to a lot of retro tatting.
Coats Royale size 20 is another 3 strand soft thread much like Cebelia and Opera. It works up to the same size as the Flora size 20. and comes in large balls but only in white (and ecru?).
The last thread on the board is a Coats Button Craft thread Dual Duty Plus. It's a glace thread with lots of body and although there isn't a size on the spool it works up about the same size as the DMC Cebelia 30 or the Altin Basak 50.
And now that I've shown you all these threads I can pull the flowers off my blocking board and use them!
Posted by Sharon at 11:07 AM 3 comments:

As a tatter we use a lot of different threads. A single strand of thread can be easily pulled apart. Two strands are a little bit harder to break, but when you start twisting strands together they become much stronger. If you take embroidery thread you can see that it's made up of 6 strands of thread, but if you look closer, each of those strands is made up of 2 loosely twisted strands. If you look at perle cotton the strands of thread are much thicker, but there are only 2 strands not six and the strands are more tightly twisted.
A 3 strand thread can have finer individual strands than a perle cotton, but the strands are twisted much more tightly together.
You may have heard of people talking about 'S' twist and 'Z' twist. The letter S starts on the top right and moves to the left. The letter Z starts at the top left and moves to the right. In the same way strands of thread can be twisted together by twisting them from the right to the left or from the left to the right. Flora and Olympus are 6 cord threads which have strands of thread twisted in both directions. First pairs of strands are twisted together in one direction, then 3 pairs are tightly twisted together in the opposite direction. A 6 cord thread is strong and durable. It will take tatting and retro tatting without becoming worn or fuzzy.
Most tatting threads are cotton. You can use other fibres, but the majority of the time you use cotton. Cotton is soft, fluffy and fuzzy and when it's spun together it's still fuzzy. Threads with lots of fuzzy bits in it doesn't tat very well. John Mercer a 19th century chemist devised a method of chemically treating cotton fibres to remove the fuzzy bits and it also gives the thread a nice shine. The process is called Mercerization and even today we see the word mercerized on most of the threads we use for tatting. Fuzzy bits don't slide very well so most of the threads that are really good for tatting are mercerized. Polishing the thread gives it extra lustre and makes the knots slide easily.
Sometimes I want a really fine thread to create something delicate like an edging to float on the edge of a wedding hanky. Other times I want a nice thick thread to make a quick project. Whatever I'm making, I sometimes find that while I have the right colours in my stash, they're not all from the same manufacturer or they're not all marked with the same size.

Take a look at the picture on the left. All of these flowers were tatted using the same pattern and there are 7 different brands of thread that all look remarkably close in size. There is a measuring tape down both sides one in metric and the other in inches so you can judge for yourself.
The first thread is Flora size 20 and it's a 6 cord thread that's nice and crisp the stitches slide easily and the thread doesn't fall apart if you have to undo and redo sections of your tatting. It isn't as well polished as some 6 cord threads so it has more of a matte finish. This is marginally the largest of the samples.
The second thread is Opera size 20. It's a 3 strand thread that's more polished than the Flora so it's shinier and it's softer to the touch. It will take some gentle retro tatting without too much effect, but if you have to re-work the same piece several times the thread gets fuzzy and starts to fray.
The third thread is Oren Bayan size 50 which is a 3 strand thread and shiny like the Opera thread but it seems to be a little more tightly twisted and a little crisper and stronger so that it has less of a tendency to fray.
The fourth thread is Altin Basak size 50 another 3 strand thread. It may not be apparent from the picture, but this sample is the smallest of the 7 flowers. The thread is tightly twisted and well polished, but not as shiny as the Opera or the Oren Bayan. Again, as it seems with all of the 3 strand threads, they don't handle re-tatting very well.
The fifth sample is Olympus size 40. In my opinion it is the best thread of any of these shown to work with. It's a crisp 6 cord thread with a nice polish. If you tat tightly with a 6 cord thread, the project will hold it's shape without much need for blocking. The thread has a nice sheen to it and it will take multiple attempts at tatting and un-tatting without any apparent affect on the thread.
The sixth thread is DMC Perle (or Pearl) 8 which is a 2 strand thread. The thread is soft and lustrous, and the stitches slide easily but the thread won't take well to multiple attempts to tat and un-tat. It can separate and fray easily if you grab only one of the strands doing a join, but if you work carefully the sheen makes for a lovely finished product.
The seventh sample is 3 strands of embroidery floss. This is a no-name thread and didn't make a very satisfactory flower. DMC or Anchor embroidery floss have a nice sheen that makes the stitches slide easily. However, this sample makes the point; 3 strands of embroidery floss makes a finished project roughly the same size as all these others.
I haven't done Cebelia or Manuela size 20, but I will and you will see that they too are almost the same size. So there you have it. 7 different threads with sizes marked on them from 8 to 50 and yet the finished size of the tatting is almost the same. So the next time you need a colour and you don't have it in the selected brand, you'll know what you can substitute, and if a pattern calls for a brand you don't have, instead of giving up until you can get to the store, select and alternate brand, and get to tatting.
Posted by Sharon at 10:40 PM 5 comments: