I have no interest at all in "social media" I socialize with real people, not electrons on a machine. I joined Facebook after I received a barrage of "Friend" requests thinking it might be a good way to connect with people. Sadly, it connected me with hundreds of people I don't really know. Friends of friends of tatters whose names I don't even recognize. Initially, I accepted the friend requests of people I recognized or people used tatting as their profile pictures, so I had a vague idea who they were. Many of whom like playing various games on Facebook collecting peas or butterflies or whatever, and consistently send me requests to accept, or send some little bit of something. Signing up for a Facebook account required providing information that I didn't think Facebook or anyone else needed to know so I left those fields blank.

No one on the internet needs to know my personal information. They don't need to know my phone number, address, sex, age, school, occupation or any other of a myriad details that so many people seem cheerful to divulge. Now I know that a lot of these details are on the internet anyway, but why would any sane person want to make it easier for nefarious individuals to collect personal data?

I go on Facebook once in a very long while, but recently I have been receiving emails from Facebook telling me that I have notifications pending and after I ignore several messages, I log into Facebook, delete the messages, many of them from a niece who thinks everyone in the world wants to see the forwarded pictures of whatever animal she thinks is cute, or endless requests for butterflies or peas or whatever other stupid game is being played.

Wait a minute. Who is Facebook to insist that I verify my familiarity with other people? That isn't something Facebook needs to know. As it happens, many of the pictures that they asked me to identify were pictures from other tatters. Like many of us, I only know these people online, not in person. A lot of us use avatars that are somewhat anonymous and if/when we post pictures of people, they aren't people that other tatters could identify.

The whole exercise just makes me fuming mad. Facebook could drop off the face of the earth and I wouldn't lose a second of sleep over it. So I've decided to consign all of their notifications to file 13. I would remove myself from the service entirely, except that I've heard that you can't really, once they have your info, it's there forever. Of course, to remove myself, I'd have to be able to sign in, which I can't.

I don't want help with it. What I'd really like to do is blow it up. NO, NOT REALLY! SHEESH! You can't even express your frustration with things these days without having to pick your words carefully to be politically correct.

mutter, mutter, sputter as she  shuffles off back to her cave.
Posted by Sharon at 8:53 PM 10 comments:

Ideas. I have lots of them. Some of them wander around in my brain looking for a way out and others get trapped in the corners. 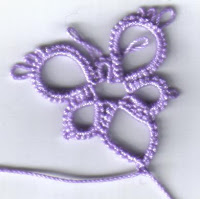 I have a book half completed, because the enthusiasm dropped off when one of the patterns for it stalled. I have or maybe it's had, another idea for a book, but after the first couple of designs I kind of forgot which direction I was going in.

I got out a hanky to put and edging on, but after fussing with the quilting thread that I was using because it perfectly matched the flower on the hanky, when it broke repeatedly, I folded the whole thing up and put it away.

I was looking at some edgings thinking that I should just sit down and tat to get myself back in the groove so I was looking online at edging patterns and saw some motifs in the middle of the images of edgings which reminded me that I was thinking of designing a motif that could be tatted continuously like and edging. Sort of tat half the motif down one side and then come back along the second side doing the other half of the motif.

Like I said, lots of ideas, just not a lot of will power to execute them. Maybe getting a Kobo for my birthday wasn't such a good thing. I've read about a dozen books ever since I got it in April, but not much else is happening.

I have an enormous delphinium in my garden that stands over 6 feet tall. During the growing season my sweetie has often said 'can we pull that weed out?' referring to the delphinium. It isn't much to look at most of the year. Then it blooms. Two foot long flower spikes covered with purple/blue flowers that just shout with rich vibrant colour.

My mother had a light blue delphinium in her garden and when I bought one for my garden I expected the same light blue flower on a plant 3-4 feet in height. Surprise! This one towers over my husband who is 6 foot 3 inches tall. The flower spike at the base is over 6 inches across, with the individual flowers over 2 inches across tapering at the top of the spike to over 1 inch across. In other words it's one huge mass of flower. You can see that the flower spikes are way over the top of the fence.

Every year I put it inside a tomato cage hoping that it will give the flowers the support they need. Every year it stands straight and tall, looking glorious. Until the first heavy rainfall. Then I wake up to purple branches laid across the lawn as the weight of the water and the wind topple the giants over. What's still out in the garden looks like a lot of flower. But the largest spike just broke off from the weight of them and I brought it inside. See. Huge. Colourful. Mass. Next year I'm putting in a 6 foot pole to hold them up. 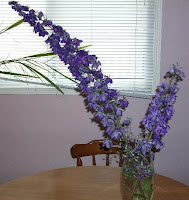 Something else with colour is this. You saw it as it was being worked. It had skinny little spaghetti chains. Then it had ruffles. As it was worked it looked like a ruffled mess. Now it just looks like glorious wonderful colour. I love it. I also don't have a table to put it on and show it off. The dining table is used all the time so it isn't a good option. The speakers which I thought would hold it nicely are too narrow. It does fit on the end table, but the only table currently without a doily on it is kind of hidden in the corner where I can't see all the lovely colour. I think it's time to persuade my sweetie to make me a table. 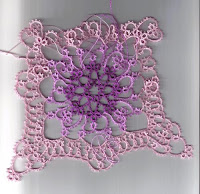 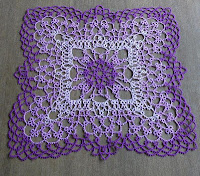 The finished doily is about 12 inches across and I like the colour, the shape and everything about it. If I were doing it again, (not going to happen) I'd change row 4 so that the side by side rings are joined to each other and I'd use a single ring instead of a cloverleaf in the corner of the row. It's the really dense row of ring and chain that outlines those spaghetti chains and makes that lovely negative space stand out. I've designed about a dozen doilies and this is one of my favourites, but it still needs tweaking, which it isn't going to get. However, working on it has me thinking that I should go on a tatting binge and create enough new designs for a book. I have a couple that haven't been documented yet and this one has me thinking I should just go for it. Making doilies could go through thread stash in double quick time.
Posted by Sharon at 11:42 AM 7 comments: