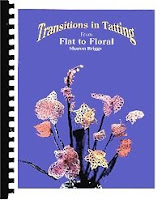 I have decided to reprint my book Transitions in Tatting. It's something that I've wanted to do for a long time, but it seemed like a monumental task. The very old computer I used to write the 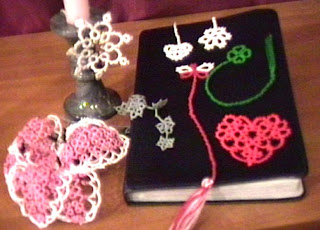 book on had very little memory and when the book was done it kept losing the pictures and diagrams of the patterns so I often found pages with text but where the pictures and patterns ought to be there was nothing but big gray markers the shape of the missing graphics. When I rebooted the computer and loaded up the book with nothing else in memory, it was fine, but anything else running on the computer and pictures started to disappear. If that weren't bad enough I didn't like a number of the pictures. The scanned images were fine but not having a digital camera at the time, the pictures of the 3D objects like the flowers weren't as good as I would have liked. Since I wrote the book I have gone through several computer changes. A new computer, several changes of operating system, a couple of hard drive changes and some software changes. Some things I used to create the book, don't exist anymore, like some of the software and some of the lace. The idea of fixing things so that I could reprint the book just seems daunting, almost like starting from scratch. The other day I came across some backup disks and discovered that my sweetheart husband is brilliant. Well, I knew he was, brilliant already, I just discovered one more reason to think that way. Right after I printed the book, he took all of the files, zipped them and burned them to CD. What I discovered the other day, were the CDs with the zipped files of the finished book. I can't change the things I don't like, like the photographs I'm not happy with, but I can print these files. I not only can print them, but I have printed them. 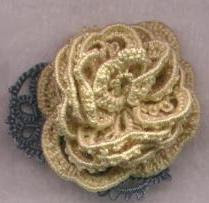 So the question is, how many of you would like to buy a new tatting book? I called the book Transitions in Tatting because it starts at the beginning with basic traditional patterns done in 3 different notations, long, short and visual and then progresses into some modern designs like a couple of hearts, a couple of critters, and a beaded choker which are flat, then it progresses into 3D tatting. A small wrist bag big enough to hold a small ball of crochet cotton, and a beaded bridal bag, followed by a 3D treetop angel and several life size flowers including a daisy, delphinium, tulip, daffodil, star gazer lily, and orchid. I also included some leaf patterns to go along with these.The book is 76, 8.5 x 11 pages, but in my opinion, roughly the first third of the book wouldn't interest an accomplished tatter as it just contains a lot of traditional stuff like hens and chicks edging. I included the basic patterns in 3 notations at the beginning just to show people who are not comfortable with visual, drawn patterns how to follow them. If you are already comfortable with drawn patterns this section is kind of boring. That still leaves you with 50 pages of fun stuff.

Here's a list of the Table of Contents:
Flower Bookmark
Butterfly Bookmark
Daisy Bookmark
Heart Bookmark
Shamrock Bookmark
Split Ring Cross Bookmark
These are patterns I often use to teach beginners as each one is a simple motif with a long zigzag chain and tassel. Not a lot of work in each one so they are small beginner projects suitable for learning how to tat.
Traditional type patterns for just the basics:
Edgings
Insertions
Motif Patterns
Original patterns that become increasingly more difficult as you progress through the book and everything from here on has been worked with size 20 Opera thread:
Simple Heart
Floral Heart
Bunny
Turtle
Beaded Choker
Wrist Bag
Beaded Bridal Bag 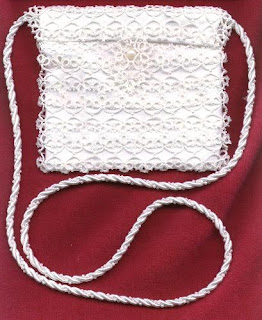 3D Angel
Daisy
Rose and leaf - pictured above. Not life size , it's only about an inch across, but it makes a really great lapel pin.
Delphinium
Tulip and Tulip Leaf
Daffodil and Daffodil Leaf - these are shown in the gallery on my web site 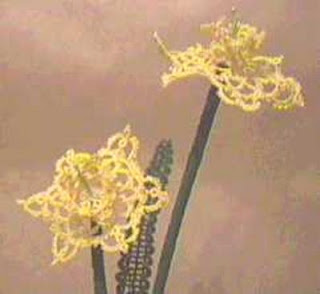 Carnation - shown above. I noticed when I used the carnation from the Tatter's Treasure Chest that the perky flower ball was small and after a while it flattened out in the middle. My carnation design is more the size of a real carnation and it doesn't flatten out. 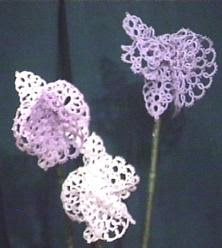 The book will probably cost somewhere in the range of $30 and I'm taking advance orders. I'll even sign them, which I didn't do with the first printing unless requested. Somehow writing in someone's new book seems wrong, but way back then I simply didn't think of myself as an author. So if you'd like to send me an email at sharon at gagechek dot com or leave a comment on the blog, I'll be taking advance orders. 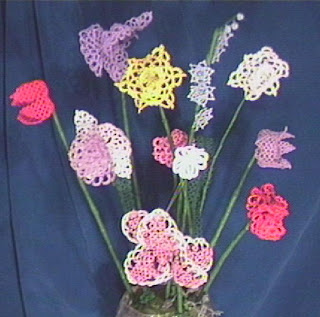 The book has been reprinted and the cost is $30.00 Canadian plus shipping (to the US $6.40 and International air mail $12.80). Payment can be made through PayPal, just email me at sharon at gagechek dot com or tatdlace at gagechek dot com giving me your full mailing address and your PayPal email address and I'll send you an invoice for it.