I've only lived here for 20+ years, yet this week was the first time I made a trip down to the Coats and Clark clearance centre. I've known it was there, I just never got around to making the trek, partly because it's in an out of the way place and partly because I didn't know it was open to the public. What prompted me to check it out was some folks on a local email list recommending it. When I did investigate it, I discovered that it is only open 3 days a week.

We had to visit a client about a job and they were just a few blocks away from the Coats and Clark location so I had to drop in. I was hoping for lots of different crochet threads, but what I found was rooms and rooms full of yarn and very little crochet cotton.
I was wearing a tatted collar so that I could show the staff the kind of thread I was looking for, but they didn't have any crochet cotton on hand. I did discover some spools of Dual Duty Plus which is suitable for bookmarks, but as this is the clearance location the colour selection isn't terrific.

The larger spools of thread are Machine Quilting and Crafts thread size #50. These were all plastic wrapped and it was hard to tell what size 50 would look like tatted up, but I was thinking I might do a doily with the thread so I bought enough for that purpose. I opened one of the spools and tatted a wee ring when I got home. 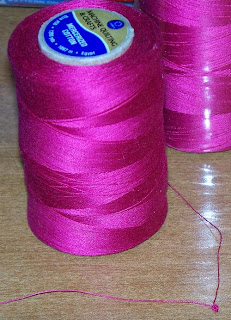 Size 50 is, well, tiny as far as doily threads go. It's fine enough to make bookmarks out of although they'd be a little thicker that I like. Size 50 wouldn't be my first choice for doily thread. 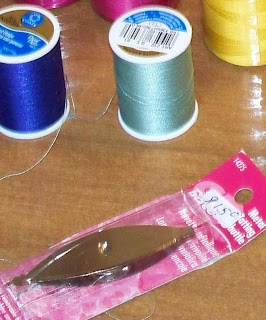 They also had both metal and plastic Susan Bates shuttles. Again not my first choice for tatting but at $1.50 I got one anyway. Even if I don't use it, it gives me a shuttle I can give away if I need to, or one to show students what is available and point out the differences between the metal and plastic shuttles.

If you look close at the base of the dark blue thread you'll see a tiny ring. I had to show the staff what these odd looking contraptions were used for. I left them with my business card and my email address so if they get in any crochet thread they can let me know.

Luster Sheen is 100% cotton and as you can see it does tat. I will either crochet a shawl and add a tatted border, or I'll tat the whole thing. I haven't decided which yet. It's going to take a humungous shuttle to tat with it, but with all those colours, it should go with everything. 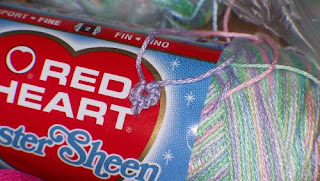 I bought the cross stitch kits because they were very cheap and I thought my sister might enjoy them.

Not a bad haul for a place that didn't have what I was looking for! 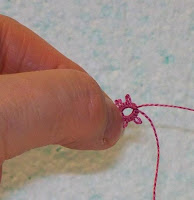 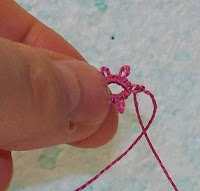 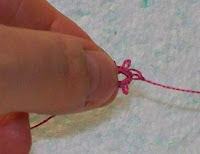 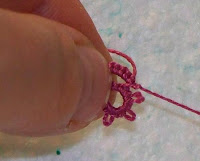 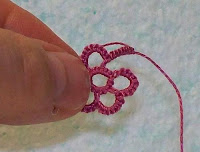 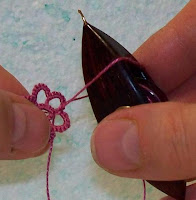 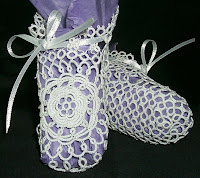 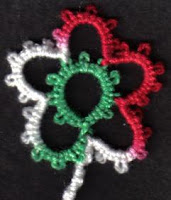 The Transitions in Tatting order form is now up and clicking on the link
will take you to the page. I've also added it to the links list on the right.
One of the first patterns in the book is one I like to use for teaching and it's pictured here on the right. The design is intended to be worked in size 10 variegated thread.
I created this pattern so that it could be done using all chains an using a variegated thread it works the same way as using 2 colours of thread since you rarely have the same patch of colour both wrapped over your hand and coming from the shuttle. The central ring can be tatted as a ring or it can be tatted as a mock ring so that the whole bookmark is done in chains. 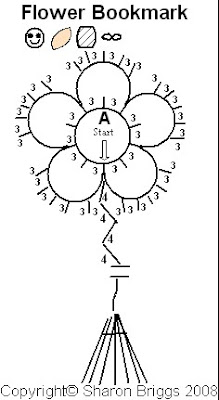 I often cut out flat shuttle shapes out of card stock or plastic lids and prewind them with thread. For the "ball" thread I use my business card and wind the ball thread around it, holding the card and the shuttle together with a paper clip and that way everyone is starting at the same point. The paper clip is slid over the thread between the shuttle and the card and we can start with the mock ring in the centre. I explain the difference between a normal and a mock ring and show them how they are different, but I use chains in the first lesson and rings on the second lesson.
The tail of this bookmark is just a zigzag chain with a tassel. It's a simple enough project that beginners will be able to complete it easily. It gives them practice without adding in anything confusing so they can concentrate on getting the thread to flip and making their picots a uniform size.

There are several small bookmarks like this at the beginning of the book that use different techniques and let beginners learn things step by step.
If you are a tatting teacher looking for a simple pattern to work with, you have my permission to copy and distribute this pattern and picture.
Posted by Sharon at 1:45 PM 1 comment: