I Hate Do Overs


When you're a kid on the playground and a ball slips out of your hand or you're balance is a little shaky and you stumble you can always do it over again. Do over is a favourite call for most kids.

Then there's the other kind of do over. You know the kind I mean. It's the do over where you've just finished knitting a sock and you have to do it all over again to make the mate, because as we all know feet come in pairs. So if you're tatting a baby bootie, cheer up, just as the first one is done, there's a whole new bootie to start.

Ears come in pairs too. So every earring you make means there's another one coming up. The same thing happens with mitts and gloves. I hate things that come in pairs because no matter how much I psych myself up, I know that a finished one isn't the end, it's only the middle.

I like working on a project and when it's done. IT'S DONE! Having to revisit a pattern makes me cringe. I made the butterfly that I use as my logo and stupidly gave it away. I have the pattern and more thread, but I just don't want to have to do it over.

I have a novelty bookmark that I did which was a free tatted tree with flowers at the base and a butterfly for a tassel made with several colours of size 12 perle cotton. Because it was freely tatted with random rings as leaves and a solid tree trunk made with several rows of chains, it would be difficult to reproduce it exactly. I'm rather fond of it because the trunk makes a nice straight side to fit into a book and the idea of a piece of tatting that's also a picture, just tickles my fancy.

The other day hubby was vaccuming and he decided to dust of my night table. I am not a neat person. My night table is covered with the usual flotsam and jetsam typical of a night table and bits of ephemera that even I have forgotten was there. I don't much care if the bits of thread and the odd bead gets sucked into the bowels of the machine. But since we had just had a discussion of "Did I have any white hair ribbons hanging off the dresser?", as something white had just gone down the tube, I was a little concerned when a similar exclamation was uttered as he ran the machine over the night table. The only thing I know for sure was on the night table, because I use it all the time and love it dearly, was a certain one of a kind bookmark.

When the unknown object had flown off the dresser and down the throat of the machine I didn't even bother to look, but when the same thing happened to the night table I had to check. The bookmark I had created with size 10 thread as a project for my beginners class sat proudly on the table, but the other original, took me weeks to make it bookmark, was no where to be found.

It's OK, I could make another...I hate do overs. If it's in the machine it's going to be in the middle of a very full bag of dust dirt and hair... It just went in, it has red flowers on it, it should be easy to see. Right? Maybe I could fish it out with a crochet hook.

Not only could I not fish it out with a hook, I couldn't see anything but grey dust inside. Even after I cut the bag apart I couldn't see anything but one big hair ball full of dust. I poked, I prodded, I turned it upside down. Then I got both hands in ripping things apart and came up with....a white shoe lace. I know what got sucked off the dresser. I tore some more. Then finally, I found this little grey lump. It kind of felt a little bit like it might be tatting, so I coaxed it out of this big ball of snarled hair. I still wasn't sure what I had, but after a bath with lots of hot water and detergent, I have my one of a kind bookmark back.

There has been some talk recently about making a baby bonnet out of a hanky and some questions about a suitable edging. You can use any edging whether it's a really simple half ring edging, or a more elaborate edging made with several rows of tatting. Most commercial hankies are roughly 11 inches square and that means 44 inches of edging should be adequate. To make a hanky bonnet first tat the edging and attach it to the hanky like this: 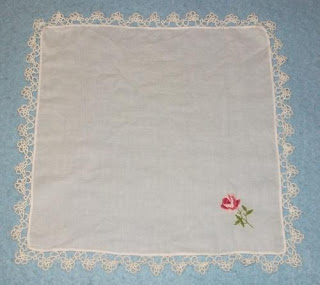 Typically you wouldn't use a hanky with an embroidered flower in the corner, but that's what was handy, so I used it for this tutorial. Fold back about 2 inches on the front and stitch along the edge of the hanky where the lace is and it should look something like this: 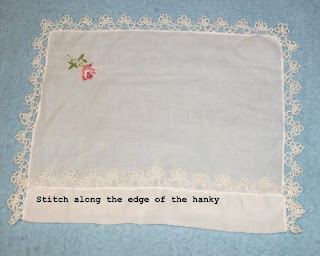 Then fold back about 2 inches on the back, but stitch it about a half inch from the fold to make a casing. This will allow you to run a ribbon through the casing. When you tie the ribbon, it will gather the back of the bonnet shaping it. 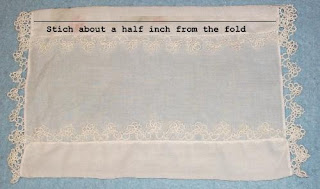 Not having a baby head handy I stuffed it with a ball of thread to show you how the back looks. 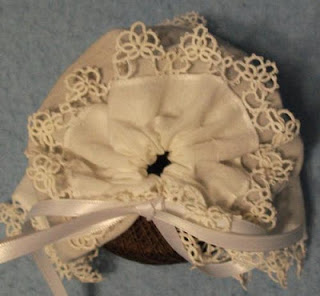 To finish it off add ribbon ties on the front with optional ribbon rosettes or tatted motifs in the corners where marked with an X. Extra ruffles and nice on girls, but not as necessary for boys. 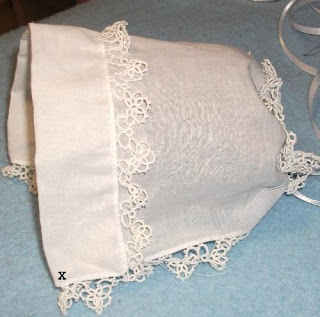 Depending on the size of the baby, you can make the bonnet larger or smaller by increasing or decreasing the  size of the folds. If the baby is a preemie, you may want to start with a smaller hanky.