My hiatus from tatting has included reading lots of books including some about quilts. I get quilts as something that uses up scraps and usable pieces of fabric from worn out garments. I get quilts that are one of a kind works of art to be displayed. I get appliqued quilts. I get making quilts as a relaxing sewing outlet. It's the other 90% that I don't get.

I understand that each one is unique. I get that. I really do. I'm just having a hard time wrapping my mind around buying fabric just to cut it up and sew it back together just for the sake of making a quilt.

Maybe it's because getting neat precise points while machine sewing has always been an issue for me. I can do anything with needle and thread and for several years I made all my dresses. Points where things had to meet were always hand sewn first because just throwing pinned together pieces on the sewing machine never gave the results I wanted.

How is it that a leisure art based on cutting up perfectly good sheets of fabric and sewing it together again to make a sheet can be an industry? How can tatting do the same thing?

Inquiring minds want to know.
Posted by Sharon at 11:48 AM 3 comments:

Tatting on hold for fretwork

Last summer I fell while carrying groceries, tripping over uneven pavement assisted by some ill fitting sandals. I caught myself by landing with most of my weight on my wrist and some of it on my face. Afterward my wrist was sore. Too sore for tatting or using the computer mouse, so I spent a lot of time reading rather than tatting.

During this time my darling spouse took up fretwork also known as scroll saw work. After a few easy bits he searched the internet for something a little more interesting and found a lot of free patterns on line. This made it necessary for us to check out various hardware and building supply places for suitable wood. Meniere's makes him too dizzy for much travel and certainly not travel by himself, so I need to make myself available as a prop, just in case. I spent the fall mostly assisting in locating suitable wood and helping trim up larger pieces into usable stock. Here's one of his earlier bits. 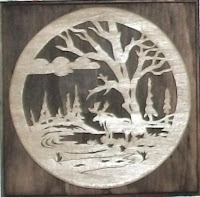 Of course once the design is cut out it needs to be mounted or the silhouette effect is totally lost because you can see through it. That means more trips to find proper framing material. After several tries he settled on using thicker wood stock and adding a routed edge. Which, of course, added more work to making it.

Once he got started he found a lot of things he wanted to try. So, while it's usually me that goes crazy trying to tat more things as Christmas gifts than there are hours in a day to complete, this year the flurry of activity was left up to my other half. Which was nice for a change, but left me feeling somewhat like Christmas came and went without me.

He's also taken up fretwork of a different kind.

My sweetheart plays a 12 string guitar. He's never learned to read music so he just plays by ear. Recently he's been recording some traditional pieces that he can share on the internet. I thinks he sings and plays beautifully, but then I think he does everything well. So there you go, fretwork both carved and played.
Posted by Sharon at 2:39 PM 6 comments: