While there are a lot of things I could blog about, like the week from h--- where installing a garage door opener required repairing the ShopVac and rebuilding the storage loft and the 1 month old computer with all of hubby's programming, our business records and personal banking records suddenly quitting. Or the fact that I have tatted the same 3D flower in 7 different types of threads to show the thread comparison. BUT all I'm going to post is this: 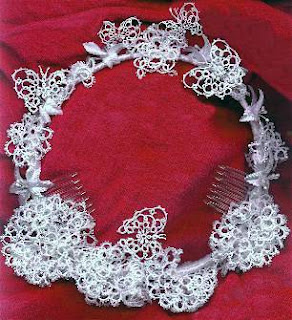 The headpiece I made for our wedding. Happy Anniversary honey, I love you more and more every year. Thanks for being mine.
Posted by Sharon at 10:04 PM 1 comment:

One of the most frequently asked questions is, 'What is the difference between needle tatting and shuttle tatting.' I suppose the best answer is 'Everything and nothing' .

When the needle tatted piece is tatted very tightly on a fine needle, the end results look the same as a shuttle tatted piece which is worked in a somewhat loose manner, so that there is no apparent difference. The process of how the pieces are made is totally different and therefore the finished pieces may look the same, but they aren't usually.

With needle tatting the stitches are formed on a needle, similar to the way you 'cast on' stitches in knitting, doing knit one, purl one and then the threaded needle is pulled through the stitches. The finished lace however is only as fine as the needle you are using to make it. The typical method for doing this creates a "mock" ring. You can make a true ring, but most instructions you will see create a mock ring.

Mock rings are just chains formed in a loop and joined at the base. They are not as stable as true rings so they can lose shape after they've been washed a few times. If the work gets cut or torn the whole thing can unravel, so to stabilize it (make it keep it's shape) and prevent it from unravelling you have to tie a knot after every ring.

Needle tatting can be done making true rings which produces a sturdier lace that won't unravel if it gets cut. Remember that the thread has to be drawn through the stitches that are formed on the needle, so one of the drawbacks is that the thread can become worn from the friction of pulling it through the stitches and there is just so much thread that you can manage on a needle. Shorter lengths of thread are easier to handle, but result in more ends to hide.

Needle tatting is easier to learn, but the finished product is typically looser, floppier and more padded looking than the same piece shuttle tatted. The needle you work with has to have a big enough hole in it to put the thread through, but a big hole also means a fatter needle. Since the stitches are formed on the needle a fat needle makes fat stitches. Fat stitches aren't as tight or crisp looking as stitches formed directly on the thread.

Some designs can only be done with a needle because the design requires being able to get the thread into places where a shuttle won't fit. Stringing beads on a needle is certainly faster, so for making jewellery, people often choose to use a needle.

In shuttle tatting the stitches are formed directly on the thread so the work is as fine as the thread you are using and the finished piece generally looks crisper than a piece done with a needle. As mentioned a project which has been shuttle tatted loosely and one which has been needle tatted very tightly, will look the same. Rings are true rings that don't need anything to hold them in place. If shuttle tatting gets cut or torn it will only unravel back to the last whole ring. The thread you use is held on the shuttle and wrapped around the left hand then the shuttle is manoeuvred around the thread on your hand to form the stitch and by switching the tension between the right hand holding the shuttle and the left hand, the stitch is flipped or transferred to the thread on the left hand.

Co-ordinating both hands simultaneously to get the stitch to flip takes a bit of practice. So shuttle tatting is harder to learn, but the results are worth the effort. Using the same thread the needle tatted article will generally look puffier and more padded. Both finished items will look quite similar and the untrained eye would not see any difference.

Which method you use depends on your preference. People who do both use the method most appropriate for the project. You couldn't shuttle tat with yarn very well, but you could needle tat with it. Then again, with the size of holes you'd have in the rings a project made with yarn wouldn't be very warm ;-) People with arthritis who have a hard time flexing their fingers, find needle tatting easier on their joints. The same is true for any kind of hand/wrist/arm injuries. There is a place for both types and it's mostly just a matter of preference.
Posted by Sharon at 9:19 AM 9 comments: 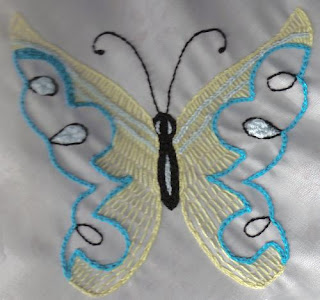