I picked up some tiny bells the other day because I thought they were cute and could probably be used with tatting. I should have included something for size reference in the picture. They're smaller than a quarter of an inch across or about 7 mm. 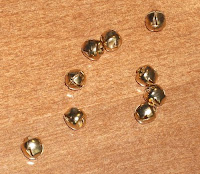 I sat down with some black Opera size 20 and some size 20 Lizbeth Turquoise and tatted a row of edging adding in the tiny bells as I was going. I had an idea that tinkling little bells around the ankle might be kind of cute. After the first row I had intended on just making a chain across the top, but I could tell that would be too skinny so I thought of making a mirror row along the top and replaced the bells with tiny gold beads. I didn't like the space that left between the large rings top and bottom, so I added in some iridescent black dagger beads to fill the gap.

Overall, I like the effect and the bells do make a nice little jingle when you walk. I'm not the kind of person to wear ankle jewellery. Actually I don't wear much of any kind of bling. I have a diamond engagement ring, but I don't wear it. My ears were pierced and I used to occasionally wear earrings, but I'd gotten away from it for so long that the last time I tried to put them on I had to poke a new hole because it had grown over. I've decided though that I like this one. I think it might even make a nice choker.

That brings me to an interesting question. Do you wear one anklet or two? Earrings are generally worn in pairs, but you don't often wear bracelets on both wrists. So what about anklets? Ankle bracelets are usually only worn on one leg, but I've seen designs for ankle wear done in pairs and I've seen singles. Of course maybe I'm only seeing one displayed but there are actually two. Does it matter? Does it depend on the design? I was all ready to whip out a second anklet when I decided that I only want to wear one. What do you think? 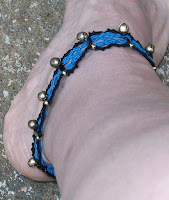 I received an email this morning from Meme. She has been too busy for much tatting recently but she finally updated her blog with some bridal tatting she did a while ago. Go check out her blog for the full size pictures of this gorgeous dress back. The motifs are joined together in a diamond shape and three more motifs connect the lace back to the sides of the dress. The matching earrings were tatted in silver and white. 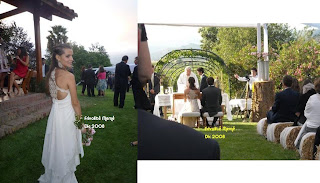 I not only find the tatting wonderful, but also the creative way in which it was incorporated into the dress. It isn't embellishment, it's an integral part of the dress itself. I find myself wishing I could be creative like this.

Meme sent me this additional information. The bride asked her to do the tatting and she was provided with a mold of the area where the tatting was to go. She tatted motifs in the general shape of a diamond ending with 2 motifs where it joined to the neck. At the sides for the underarm the motifs were elongated to join up with the front of the dress and a silver edge was added. It was tatted in Mercer Crochet thread, light ecru color (like butter), No. 20.
Posted by Sharon at 2:36 PM No comments:

That's how I've been feeling recently and I'm blaming it on the heat. The air conditioning is working, but the extra warm weather means that it doesn't get all that cool upstairs where my office is unless the ceiling fan is also on. The constant draft is drying out my eyes and making me feel too tired to work and just plain cranky. I sit at the computer and something that should take 5 minutes seems to take hours. I'm at snowflake 25 of the 30 plus snowflakes and I can't seem to whip up enough enthusiasm to just get the last bit done. It's taking so long to pull things together that I'm starting to feel like I'm describing things differently from what I did at the beginning and I hate feeling like I'm cutting corners just because I want it DONE. 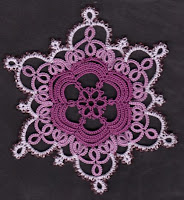 I've hardly held a shuttle in weeks other than to re-do several snowflakes in colour and there's this little bit. I was intrigued by the anklets I've seem on several blogs and thought I'd do one of my own. I thought it would be a good way to showcase tatting, but once I had it finished I remembered that I mostly wear socks and running shoes so that for me it's kind of a waste of time. 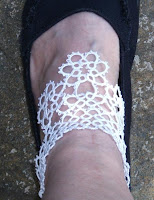 The 25 Motif Challenge is beginning to take more time than I want to spare. Quite a few of the new participants don't blog in English so it's added another step having to translate the blogs. The translations sometimes don't make sense on key words so it requires getting creative. The heat has zapped my creativity so that adds to my frustration.

We're missing the bird and strangely, hubby is missing her more than I. Of course I'm not missing the hours of cleaning cages and caring for her, so maybe that's part of it.

We've had the Wii for about 3 weeks and I've lost 6 pounds which is good. Of course working up a sweat and then sitting in a draft from the fans has resulted in back aches, So I go around the house turning off fans and hubby goes around turning them on because it's hot and I think that brings me back to where I started.

We're in the process of changing our domain name which will change all of our web site, email addresses, and PayPal set ups so this should be fun. I may suddenly look like I've dropped off the face of the earth, but trust me, I'll be back.
Posted by Sharon at 9:53 AM 7 comments:

A while ago my sister brought over her Wii system so that we could try it out. The idea that you could play a video game and get some exercise at the same time always struck me as a really smart idea. I have no objection to work. Lifting, carrying, and moving are all fine, but exercise for the purpose of exercise just doesn't make it in my book. I can run track, but running on a treadmill just isn't going to happen. Haul roof tile up a ladder? Sure. Stand around repeatedly lifting weights? Nope. I know me, I'm not going to do it.

Since the car accident I've gotten more and more out of shape. It took several months before I could walk again under my own steam and even when I could hubby didn't want me going anywhere unless he could come too. The problem is that he often can't leave the house because he's too dizzy. Consequently, I'm getting more and more flab and less and less muscle.

The other day I bought a Wii system with the balance board. Hubby thought I was joking when I said I wanted one. He insisted it was only for kids. Then we got it home and started using it. There's a lot of "anything you can do I can do better" going on right now, and all the while, we're both getting in better shape without having to leave the comfort of our own living room.
Posted by Sharon at 10:03 AM 8 comments: