A bookmark and a half

I haven't really dropped off the planet although you might think so is you were reading my blog. I haven't done much tatting either. I had plans to tat bookmarks for my siblings and send them out on their birthdays. I managed 2 out of the 8 so far, gave one to my sister, when it wasn't her birthday, just because so I did a frame picture of tatted flowers instead (which I still haven't given to her because she was away for the summer. The next birthday was in September and I forgot about it until it was too late and I was busy sewing tatted edgings on placemats for another gift and just didn't have time.

The 8 edgings were completed before I had the placemats and had to be shortened by one pattern repeat to fit. That required cutting off part of the last repeated and retro tatting enough of the design so that the ends were long enough to re-tat the edge and sew in. Tedious and time consuming. And after it was all done I forgot to take a picture!

Before I got distracted by that little episode I began a bookmark in 2 shades of pink but I cut off the shuttles because I was too lazy to run upstairs and get another one for the edging repair. Now so much time has passed that I can't remember what I was doing with the pattern and I'm too lazy to stop and count stitches to find out what it ought to be so I can tat the other side. Before you judge me on this, it's harder than you think. I was designing on the fly and started with what I thought would work, but I could tell that it probably wasn't going to sit straight even with blocking so I know that somewhere along the line I modified what I was doing. So now I have 2 ends that have been apparently cut off and without counting the stitches in the pattern repeats at both ends and comparing, I have not way to be sure where I was going with it. and I'd still have to do something more to it to make is wide enough to be a decent bookmark.

So I started over again in a solid and variegate blue. It too wasn't wide enough but I wanted to use more than just blue anyway, so this one has a band of yellow down the middle. I'm thinking of shipping this one off with a belated birthday card, or not. I haven't decided. 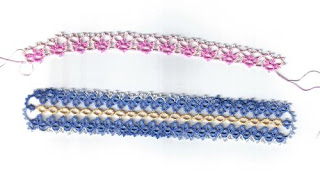 Most of August was shot trying to get things sorted out in the garage. It's one of those situations where things weren't what they should have been and things had to be redone so that you could safely work out there. Over the years my sweetie has repaired almost everything in the house, but that often means needing to take it out into the garage to work on it. 30 years ago he built a bench with 16 drawers in it to hold all the bits and pieces he uses. To fix some things we needed to get behind the desk, but it's too heavy to move full, so we had to empty things out, move the desk, work behind it and put it back. While it was out the drawers sat on the floor, so the car sat out in the driveway and we picked our way around the clutter within. It's amazing the number of jobs that you just can't complete without making a trip to Home Depot or Canadian Tire for a 50 cent part. It's especially amazing that you didn't know you'd need that 50 cent part the last time you were there.

August was a good month, health wise for my sweetie. The weather was good and he was good able to do things. So he did, while he could. September the weather got colder and he's back to feeling miserable. He's spent the last week hardly able to get out of bed. It's so frustrating for him to feel like being up and working one day and feeling barely able to stand the next and never knowing from one day to the next which it will be. So needing to do what could be done while we could, I took my usual place as a lamp stand or third hand. That of course meant that I was needed to tag along for every trip out for a 50 cent part and every few minutes I was needed to hold said 50 cent part while it was assembled into whatever it was.

Not a lot of tatting got done and I was too tired to concentrate much on getting this snowflake book going although I did manage to reformat it. Now I just need to get my nose to the grindstone and get it finished. I did manage to keep the 25 Motif Challenge page updated and the new Design-Tat course is up and running, so I guess I have been doing some things tatting related. Too bad this eating and sleeping stuff has to interfere so much ;-)
Posted by Sharon at 2:33 PM No comments: