And when not to colour. Some years ago Maus had a note on the round robin pages talking about doily colours. She pointed out that a doily using dark and light colours can look really pretty and very dramatic but when you lay it down on a dark wood table the dark colours can blend into the background. Similarly the light colours can almost disappear if the table surface is a light colour. None of that matters if the doily is going to be framed. So for round robins it's important for the participants to know where the doily will finally be displayed.

Colour can make or break a doily. A doily that makes good use of negative space can be really beautiful and a designer may use colour to emphasize the design and make it really "pop". Think of a simple ring and chain edging. You can work it all in one colour or you can use one colour for rings and another for chains. Do the ring in red and the chain in green and you go from a ring and chain edging to a row of flowers. Similarly colour in a doily can be used to emphasize one element 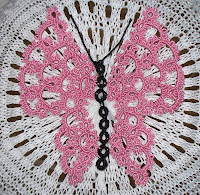 while another is subdued.

See this pink butterfly? The first one was done all in one colour and while you could tell it was a butterfly, it didn't really come to life until I changed the middle row of split rings to black. It separated both sides and defined the body of the butterfly.

Variegated threads can add a whole new dimension to tatting and the effects can be terrific or terrible. This is the same butterfly using both solid and variegated thread, but the placement of the light and dark sections of the thread was deliberate. The butterfly 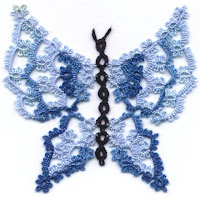 is made using 2 shuttles. One was wound with the solid blue that is a pale shade matching the palest colour of the variegated thread and the other shuttle was wound with the variegated thread. The darkest sections were used close to the butterfly body which is black just like the pink butterfly. The colour changes from dark to light as it works toward the outer edge of the butterfly wings. You might think that the whole butterfly was done in just variegated thread, but it wasn't.
Sometimes variegated thread can really add a wonderful dimension to tatting and sometimes it can completely ruin a beautiful design. In a doily where very effective use of negative space has been made so that shapes are evident within the design it is best to use a solid colour thread. A variegated thread will usually draw the eye to the colour and distract from the shape. In that instance colour and line would be at war with one another and neither win.
In a doily where the line and shape are simple and repetitive, variegated thread can break up the monotony and bring new life into the pattern. Long stretches of colour with gradual changes can make one effect on a design while another thread with short quick colour changes can bring a totally different effect. Sometimes the short quick changes can make a finished piece look choppy, but if the design warrants that kind of quick colour changes, it can be a very useful design tool.
Posted by Sharon at 11:33 AM 5 comments:

The Tatting of Kathy Niklewicz

I have been busier than a one armed paper hanger. I'm working on the designs for the newsletter and things are not flowing the way they ought to mostly because I haven't had quiet me time to just sit and tat. We've had to do a lot of running errands recently and the projects that I have been working on aren't progressing well 2 of the articles I had planned to include have had to be scrapped and now I have a new idea I'm working on that I hope will meet with better success. I have managed to send out all 5 of the Round Robin groups and I think I'm caught up on the 25 Motif Challenge. 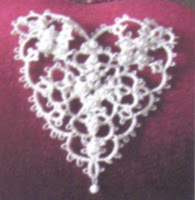 The other day I was surprised to find in the mail a large envelope and when I opened it up there was a charming letter from a tatter I don't think I've "met" on any of the tatting lists. Kathy is an awesome tatter who is a member of the Beaver County Tatters of Old Economy PA, with enormous creativity. Sadly, she is blogless so we don't get an opportunity to see the things she has made so I just have to share it with you all.
Kathy's letter to me had a picture of one of Teri Deusenbury's hearts on it and the scanned picture doesn't do it justice. Kathy's note says that she attached it by pins to a velvet heart box and the pearls were sewn on after it was finished.
Kathy had intended to send her note to me at Christmas time but was delayed so included in her package was a Christmas card featuring Patti Duff's wreath design to which she added red rhinestones, a bow pin and a tiny ringing bell.

Also included in the package was a custom US postal stamp with the same tatted motif pictured on it. That definitely gives tatting an exposure it wouldn't have otherwise.

As part of the Beaver County Tatters, Kathy dresses up in period costumes and demonstrated tatting at a number of local festivals. She brings along her small Christmas tree covered with tatted ornaments and a small Victorian dollhouse with Victorian furnishings including tatted doilies valences and bedspread which get a lot of attention.

She likes to design 3D items like this bell, egg, and heart and she often spends as much time decorating them as tatting them.

Kathy says these adorable parasols are simple ring and chain designs with an edging around the top. Sometimes she fills potpourri inside tulle netting and then she attaches a crystal call at the base. The basket was copied from one she discovered in an antique shop.

Her crowning achievement are these lovely Victorian Ladies Slippers which are about 4 inches long form heel to toe. 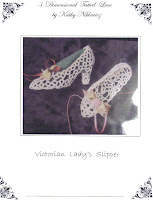 I'm so glad that Kathy sent me these pictures so that I could share them with you. She has such a wonderful way of presenting tatting that it's like it's a new art form.
Posted by Sharon at 8:10 PM 9 comments: