Ever had one of those days?

Ever had one of those days? You know the kind. A day where you wake up in a relatively good mood, the kind where you whistle while you work, the sun is shining, the birds are singing.....and then everything goes sideways.

It started with printing a single sheet of paper. The printout from one of the printers was faded so the same sheet was printed from an alternate printer, which decided not to co-operate with the router. So the print was switched to the large colour printer. Of course that printer decided to act up pulling in too many pages at a time and printing half on one sheet and half on the second sheet.

That's when things really got interesting. Pulling the cartridge out of the front of the printer cascaded a flood of toner all across the carpet. The vacuum was pulled out to clean up the mess.

Then as the toner cartridge was re-inserted, an even greater flood of toner spilled out over the desk and all across the floor. Again the vacuum was hauled out and the desk, drawers and floors were vacuumed. It was at this point that the bag inside broke sending clouds of toner into the air.

Now there was toner all over the floor and inside the vacuum which necessitated using the little sweeper vac to clean up the mess. The broken bag was carefully sealed inside a garbage bag and the inside of the vacuum cleaned out. All of the filters had to be removed washed and replaced.

Then of course the sweeper vac which has a much smaller receptacle had to be taken out to the garage to use the big shop vac to suck out the toner dust. Except... the last time the shop vac was used it was put away full so it had to be cleaned out to have enough suction to do the job.

Finally, 3 hours and a shower later, the page was printed. It almost makes you want to just pull the covers over you head and forget about getting up in the morning.
Posted by Sharon at 12:24 PM 7 comments:

I was surfing through Ebay today and saw a bunch of thread. A lot of times the thread is big ball stuff that I'm not interested in. Other times folks south of the border don't want to ship up here to Canada. Sometimes they are willing, just not sure what it's going to cost, so it means an extra step to email and ask. So When I see things I might be interested in, I still may not bother to bid. I prefer the "Buy it now" stuff so I know what it's going to cost. The other thing that puts me off is that I bid and then get out bid. So this time I waited and watched.

I was doing an update on the 25 Motif Challenge and while waiting for pages to load (waiting for pages to load is the most time consuming part of doing the update, so I've learned to do other stuff while waiting) I took a peek. The thread was still available at a modest price. The shipping was going to double the cost, but it still looked worthwhile. Just before I went out for the 3rd appointment of the day I tossed in a bid. I came home to find out that I had won. Yay me! 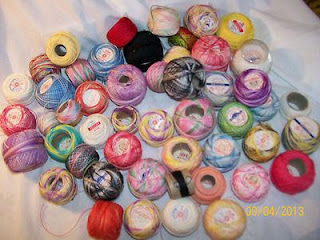 One of the things I like about batches of thread from Ebay, is that I get lots of variety for less than it would cost me to buy an equivalent number of balls of thread from the store (if the stores around here had them, which they don't). The other thing I like is that the batches of thread invariably contain colours that I would buy myself. I like pinks and blues and reds and purples which is what I normally end up ordering. Then I go to tat a pumpkin and have no orange. I try for a daffodil and have no yellow. Likewise there is no brown for an owl or green for a frog. Actually, I have remembered to buy greens because they are needed for leaves to go with the pink and purple flowers. Still, I have to deliberately choose colours outside my preferred pallette and I still come away with lots of raspberry and grape, but not much in the way of lemon, orange and lime or variegates thereof.

Ebay threads contain lots of colours that I like to tat with, I just don't recognize them when I'm actually buying. So this batch I won gives me lots of new colours while catering to my preferred tones. It's nice, now and then, to work with someone else's pallette.

How about you? Do you need a challenge now and then to get out of your comfort zone?
Posted by Sharon at 5:49 PM 4 comments:

One of the things that I have learned from teaching a design course, is that what holds many people back is inspiration. Inspiration doesn't come and hit you over the head like a brick from out of the blue. It's often just a quiet, "what if?". What if I take this design and change this little bit? What is I take this shape that sort of reminds me of a dragonfly and tweak it to make a dragonfly? What if I take that jewelry design and try to recreate it in lace? What if I just try to make a string of lace that works as an edging? What if?

Sometimes people have the desire to design, but they just don't know where to start. If you said "Design something." their minds would just go blank. The wouldn't know where to start. In coaching people to create their own laces, I have found that it helps to give them a starting point. That start can be a picture or a simple daisy motif or any other little bit that opens the door to possibilities. The first step to designing is just making something, anything, even if it's ugly. Making is the first step. Pretty can come later.

This is a picture of the first thing I designed. I wanted a collar edging for this dress, but I didn't want just a skimpy edging. At the time the only books I had were some Dover publications and I selected the widest edging I could find that would lend itself to curving around a collar. 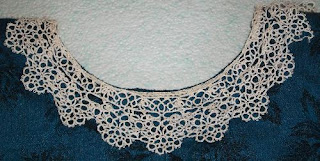 When it was done I had an edging that was a series of cloverleaf points at the bottom without a stable enough section across the top to let me sew it onto the dress. I added a row of ring and chain across the top to fix that problem, but I still had what looked like a jagged row of teeth along the bottom. Rather than give up on it, I added a row of ring and chain around the cloverleaves and an inverted cloverleaf in  the gap between pattern repeats.

It wasn't wonderful, but it worked. It also gave me the courage to try other things. That's the other part of designing. You have to be willing to spend hours
working on something that doesn't turn out the way you want. You can look at all the mistakes you make as wasted time, but I prefer to look at those failed pieces as just sample pieces with potential for something new.

What if you take a failed piece and change one little part? What if the failure is just the start of a new beginning?
Posted by Sharon at 11:23 AM 5 comments: