For a really long post, but it's worth it, I think.

I started designing flowers for my wedding. They were really ugly first attempts but I persisted creating several credible blossoms. One of the flowers most used in wedding bouquets are roses, but they are also difficult to create. Mary Konior has a design called Rosa Frivola which is essentially a length of scalloped edging rolled into a coil that only looks as good as the way you coil it. I haven't tatted it, but I wonder how well it will hold it's shape and my suspicion is that it won't.

Roses get their shape from layered petals and to repeat that in tatting means tatting lots of individual petals. Typically roses used in bouquets are buds and not full blown roses. Years ago I made an attempt at many layers but I ended up with a lump of tatting that didn't have any real shape so I tatted a cup shape to enclose it. Lots and lots of tatting and when I was done, it was just a lumpy mess like this and I might have persisted with it, but who wants to invest hours and hours to tat one single flower? 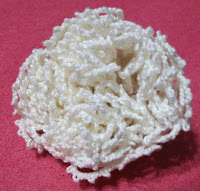 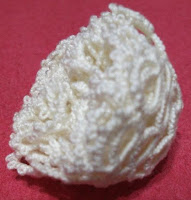 The trick is how to get something roughly rose shaped with a suggestion of layered petals without having to tat and tat and tat, while at the same time making the petals have some kind of shape. I considered one possibility would be to start with a small styrofoam ball, cover it in a base of tatting and add petals around the outside. The ball would give it the bud shape and structure and then the tatted petals wouldn't have to do anything more than attach to the ball base. I discarded the idea because the styrofoam ball would show through the lace which would necessitate figuring out a simple way of making the ball the same colour as the thread. Over the years I've made several attempts, but they just didn't work for me.

One of the other flowers I wanted to create was a blue florist iris. Not the big flashy bearded iris, but the simple skinny florist iris, not only because I like them, but also because it's one of the few flowers that is blue. The trouble is that those skinny little flat petals are hard to hold in shape. Then I looked at some of the irises used in bouquets and I realized that they were mostly buds that haven't opened out flat and it gave me and idea. It looks like the idea worked and maybe I can extend the idea to create a more open iris.

In the interim, working on the iris gave me and idea for tatting a rose and I think I might have got it. It isn't quite what I want, but it does have dimension and shape and individual petals that give the suggestion of a rose. It doesn't require oodles of tatting, although it does take a fair amount of work. from the base of the sepal to the top of the petals it's roughly 2 inches in size 20 thread, and about 2 inches wide. The petals can be wrapped around one another or the tips can be curled out just like a real petal. It isn't perfect, but it's the closest I've come. Want to see?

This design works only because the chains are tatted tightly. Let me repeat, tat the chains tightly, it's the only thing that gives the design shape. Usually you don't want your tatting to curl, but in this instance that's exactly what you want. The flower is worked in 2 layers, both of which are joined to the same starting ring. The starting ring has 6 picots and the inner layer is joined to picots 1, 3 and 5, while the outer layer is joined to picots 2, 4 and 6. The inner layer is done in 3 segments so you begin tatting up one side of the first segment and then down the second side, joining back into the first picot of the starting ring. Cut the thread leaving 5 or 6 inches, tie and knot and insert the thread ends through the starting ring. Skip over to the 3rd picot and start again working up the first side of the segment joining to the appropriate chain of the first segment. You'll see insanely long picots in the diagram with tiny red star markers on them. DON'T TAT THEM THAT LONG! They are normal size picots, but the drawing is flattened out resulting in those enormous lines. It's one of the things that happens when you show 3D tatting in 2 dimensions. Tat the second section leaving long ends, tie and insert through the starting ring. Tat the 3rd section joining the chains to the other 2 sections. You'll end up with an odd sort of tube shape. 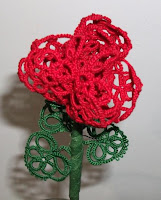 Start the second layer joining to the 2nd picot of the starting ring shown grey in the diagram because it's already tatted. Tat a chain of 5, RW tat a tiny ring of 3 and join to the picot on the first layer where marked with the star and finish the ring with 3 more stitches. Continue following the diagram working up one side of the petal. There are 3 smaller rings are joined to the larger ring which doesn't exist yet. Tat the first of the 3 rings with a fairly large picot and join the other small rings into it as you tat them. Tat the large split ring joining it into the 3 ring grouping as you go, then join it to the single small ring at the bottom of the petal, finishing it as a split ring. Tat the next large split ring and work around the second side of the petal. At the bottom of the petal join back into the 2nd picot of the starting ring

Repeat for the other 2 petals. You'll note that the petals formed by the second layer are joined to the first layer once at the bottom at the beginning where the tiny ring is and once at the top near the end of the petal between the two small rings at the top.

Take an eighth inch dowel and file down one end. Push it up through the centre of the starting ring of the sepal, it's going to be tight, and if you can, through the starting ring of the rose. Wrap dowel and thread ends with florist tape. The thread ends are what hold it onto the dowel. You can omit the leaves if you choose, or tat them,  ending with a chain or just threads and wrap the chains or threads with florist tape joining it to the stem of the flower.

So here it is at long last.

The diagram is necessarily huge, so if you have trouble viewing it, please let me know.

This design nearly drove me daffy. If I haven't mentioned it before, I have rather strict guidelines for flowers. They need to be relatively life size and life-like. They need to hold their shape without the use of wire. I figure that if you want a tatted flower you want it for display and you don't want it to flop over like a wet noodle. I also figure that if you're going to invest that much time in tatting it, that you want it to last for a lot of years and wire, even coated wire can leave rust spots. The flowers I designed for the Transitions in Tatting book have been sitting in vase for years and they're still holding up 20 years later. I vacuum the dust off regularly and I did wash and fluff them once about 5 years ago but without wire, starch or glue they're still looking like flowers.  Those requirements add a few more constraints to your designing.  Having designed a daffodil before, I knew what I needed and just had to execute it.

Sounds easy, right? Not so. I complicated things by wanting the yellow part of it to have more than just concentric rows of ring and chain and distinct petals unlike the earlier design shown here: 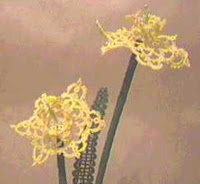 After referring to various pictures I wanted the trumpet section to have a slight flare and finish with a ruffled edge. Everything I tried was too tall too short, too wide, too loose, too ugly and in short, it took multiple tries to get a finished result I could live with. 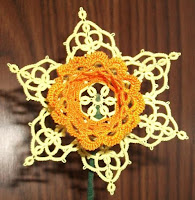 Then I started drawing it and if the tatting made me want to throw shuttles, the drawing made me want o throw the computer. It's not the computer's fault, more like I was just tired and frustrated with the design already. You never realize how hard it is to explain the construction of 3D lace until you try it. In simple terms the flower is a flat back with a tube stuck in the middle of it. Trying to show a tube shape in a flat drawing is a bit of a problem, so what I've done is to draw it as if it were stretched out so you'll see what appears to be insanely long picots between rings. I initially used normal picots with a dotted line between them, but that seemed more confusing because it might have been interpreted as picots that weren't joined. 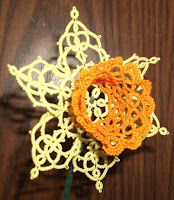 I also considered breaking the design down row by row, but that would have made for an enormous drawing, so for now it's just 2 drawings, the back and the trumpet. The yellow petals will overlap a little bit, just like in a normal flower. The chain that is drawn in red on the base is where the trumpet attaches to the base. There is a chain in yellow tatted for the base. When beginning the trumpet tat the same chain in orange joined to the same points as the underlying yellow chain. There is a picot in the middle of the yellow chain but at the same point in the orange chain there is a left and right ring pair 7-7, with each pair joined to the pair beside them. Clear as mud, right? 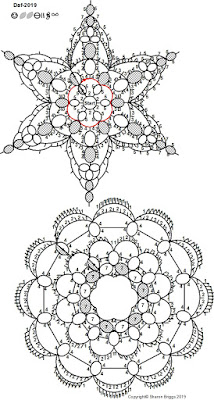 Anyway, here's the pattern. If anyone tries it out and has a problem, let me know and I'll see if I can't make things clearer.

I forgot to mention, this flower is about 4 inches stretched point to point and the trumpet is about 1.25 inches tall.
Posted by Sharon at 12:00 PM 6 comments: