Look at all the threads to play with

I recently received a wonderful package from Terry Wynn. No. Seriously. A really, really wonderful package. Terry has found that she can't use the really fine threads now and she decided they should go to a good home.

See this glorious palette? There are over 75 balls and partial balls of vintage threads. In addition to the typical vintage J.P.Coats, Coats and Clark, Lily, and Star Tatting cotton, there are brands like Bucilla and Collingbournes "Texazilk". The last couple are names I have seen in ads, but not in thread before this. All of these vintage threads are size 70, 80 or just labelled tatting thread. 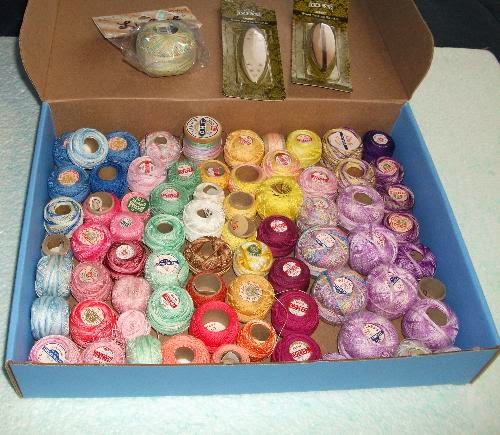 There was also a ball of Lizbeth size 80. One thing I noticed, is that the vintage threads came mostly in spools of 60-75 yards, but the newer Lizbeth is 185 yards. I like larger spools of thread for when you're planning on making a nice wide edging for a hanky or a delicate doily in fine thread. Running out of thread for a project is not something that makes me happy. I know from experience, that a wide hanky edging will use up the greater part of one of these small balls of thread. Partial balls mean that you have to play mix and match with the colours to make sure that you have enough thread.

You'll also notice that Terry included a couple of lovely shuttles with the package. The one with the stripe is a wooden shuttle and the cream coloured one is a bone shuttle. I haven't had a chance to try out either of them yet. I feel so blessed to have received these treasures and I'm already into making the thread into lace.

What I did first was grab a couple of the balls of thread and make this bookmark as a thank you for Terry. I think it turned out rather well. The whole thing was done with one variegated thread in mauve/white/green and one solid thread in mauve. It's worked all in one pass, right down to the tassel. I got to the end of the bookmark, tied a knot, then did a crochet chain to the end. The left over thread on the shuttles was used to make the tassel, so there were no ends to hide. I used my, "adding in new thread" technique to both hide and secure the starting ends, so all I had to do was snip them off when it was done.

Making the first one was so much fun. I did another one as a birthday gift for my sister. For that one I use a solid deep blue with a variegated blue/white/yellow.

Now that it's done I've selected a yellow, orange and a variegated yellow/orange for the next bookmark. These are all partial balls and I figured it would be good to use up the littler bits first. 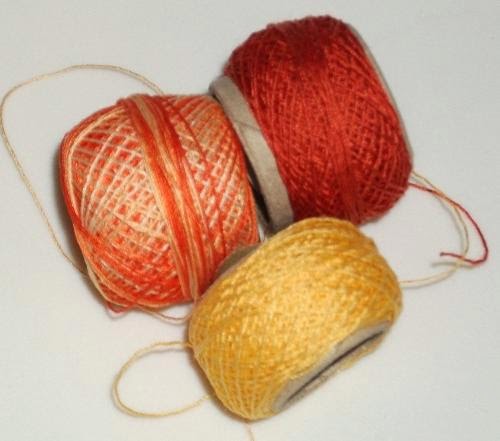 I have the other batches of thread kept separately. I know some of them have labels that say they are the same brand, same colour, and same dye lot... but they aren't. See the 4 balls of burgundy thread in a column in the lower middle? They are all labelled Star Tatting Crochet, they all say ART. 25 and SHADE 130, but you can see in the picture that the bottom 2 are lighter than the top 2. I figured that since all of these threads came from different sources, there was a better chance that 2 pinks or 2 greens from the same source would actually BE the same colour.

That was a good idea in theory, but I know from playing mix and match holding one colour against another, that I've already put the odd ball in the wrong box. My solution for this problem? TAT FASTER!!! LOL
Posted by Sharon at 11:41 AM 5 comments: