Most of the vintage tatting pattern books have been scanned and added to the Antique Pattern Library where they may be downloaded for FREE.
http://www.antiquepatternlibrary.org/
Anyone looking to complete their collection of books should check out what is available, as new books are added regularly as people have the time to scan the books for inclusion in the library. All of these works are vintage and in the public domain.

Recently the tatting community has become aware of a web site which is SELLING these same patterns. This web site: Tatting Patterns
http://www.timelesstattingpatterns.com/ sells the patterns for $37.00 which is extremely expensive when you consider they are available for FREE. There is nothing illegal about selling these patterns as they are in the public domain and if someone puts together an electronic compilation and sells them they are not breaking any laws. However it is important for all tatters to know that they should not BUY the electronic book, they should instead go the the Antique Pattern Library where they can download all of these patterns and more. In fact, it would be much more beneficial to donate the $37. to the Antique Pattern Library which is a non profit organization trying to archive all of the old patterns for posterity, not only in tatting but also in knitting, crochet and embroidery, than to buy this publication.

One of the more objectionable things about the web site at: http://www.timelesstattingpatterns.com/
is the Gallery which has numerous pictures and captions of beautiful and colourful tatting which has been harvested from various web sites, blogs, and photo albums. Some of the pictures are things which tatters have made from these vintage patterns, and the colourful pieces are certainly more eye catching that the black and white drawings in the old books.

Other pictures are for things from other publications not in the public domain and a few of the pictures are of original, one of a kind designs, which people were working on and posted to their blogs. These pictures along with captions that went with them form other people's pages imply that the tatting belongs to Timeless Tatting Patterns and that "Timeless" will be producing the patterns for them.

All of which means that "Timeless" is benefitting from the work tatters have put into creating the laces and putting the pictures of them on their own web sites. Taking pictures from web sites without the owner's permission is a copyright violation. Using those pictures to help sell an electronic publication of public domain material appears to be a form of false advertising. Now, the "Timeless" web page doesn't say that these colourful pictures of tatting represent things in their publication. It just posts them in their Gallery, but why post them at all if not to mislead? They don't really have anything to do with what is being sold.

So if you're a tatter, avoid the "Timeless" web page, except to check for purloined pictures.

Additional Note: Posting similar information on your own blog or web site will help to get the information out to a wider audience. The more people aware of the situation, the sooner it will stop. The gallery has been down for maintenance and back up and as of this posting is down again. Continued pressure on the web site owner and the server will help to keep the gallery closed. Pressure on the gallery owner in the form of polite emails from everyone concerned requesting the removal of the images, and pressure on the server from people with purloined pictures requesting the same. There is more information on what to do and how to do it on the 25 Motif Challenge blog in the "Tatters Unite" posting.
Posted by Sharon at 4:04 PM 5 comments:

Mounting Lace on a Barrette

Some questions in the tatting lists recently prompted me to show you how I attach my tatted lace to a barrette. The first thing to do is cover up the ugly metal bar. This method takes a little time, but it not only covers the bar it gives you a base to attach your tatting to. You will need ribbon like gross grain ribbon about a half inch wide either to match your tatting or in a neutral colour, a sewing needle and invisible nylon thread.

In this instance I have a white tatted flower and my ribbon is white so I can begin by using ordinary white thread. Open the barrette and remove the centre spring by bending it a little and pulling it out first on one side, then on the other. Put it aside while you work on the bar.

Measure off a length of ribbon about 2.5 times the length of the bar. In this case it's about 8 inches. You need to have more than enough to go completely around the bar. Notice that this ribbon happens to have a pattern of white dots on it. Don't worry about tone on tone pattern as it won't really be noticeable when you're done.

Insert the ribbon under the clasp and pull it about half way down the inside of the barrette as shown here.

Wrap the other end around the barrette and insert it under the hinge at the opposite end of the barrette like this.

Fold the end about a half inch so that the cut end is folded under
and begin to stitch the end down making sure that it is wrapped snugly around the bar. Shiny metal and shiny white ribbon don't photograph well,

but you can see the fold and the beginnings of the first stitch.

When you reach the end slide the needle under the ribbon and out the other side and continue whip stitching down the second side of the barrette.

Here is the completed bar with the ribbon sewn down both sides.

Take the spring and insert it in on the hinge side with the arch facing away from the barrette. Bend it a little to get it under the clasp side. Now the barrette is wrapped in ribbon and ready for attaching the tatting. 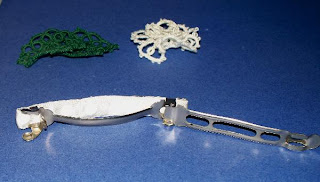 If sewing isn't something you want to do you can attach the ribbon by using a glue gun, just make sure that you don't get any glue on the top side of the barrette where it might show. Glue down the first side, then fold under the second end and make sure the ribbon is tight before you apply the glue.

This pattern has green leaves as well as a white flower and white thread is going to very noticeable on the dark green The invisible nylon thread works with any colour of thread and it's invisible when its on. 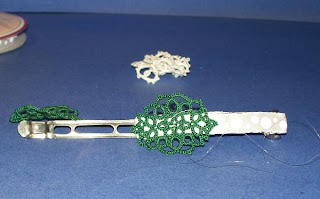 Add in the second leaf and continue tacking it down all along the length of the bar, as shown here. You may not be using leaves and flowers, but the process is the same.

The last piece to be added is the white flower. Stitch through the middle of the flower and and into the ribbon tacking it in several places. Tie a knot in the thread feed the needle through the ribbon out through the side and cut. 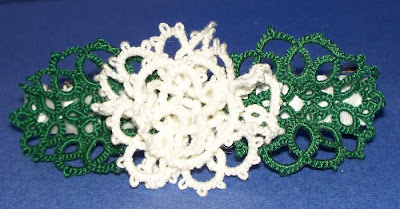 Sometimes, depending on what it is I am attaching, I just leave long ends on the tatting and wrap them around the ribbon covered barrette and literally tie the lace onto the barrette criss crossing the thread around the bar and back through the tatting. This method, although not quite as secure, has the bonus of not having to hide the thread ends.

Again, if sewing's not your thing, you can use a hot glue gun, but you take the risk of damaging your lace. If that isn't a concern then go ahead and glue it.

This pink carnation is one of the designs from my book Transitions in Tatting. It was made about 10 years ago and it hasn't gone flat in all that time. The flower measures about 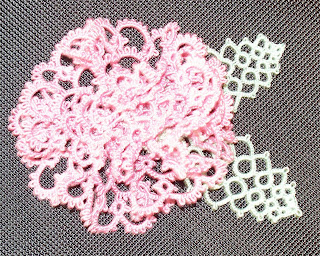 2.5 inches across and was tatting in Coats Opera thread size 20. Opera is a 3 strand thread and size 20 is closer to size 30 in a 6 cord thread. I added some simple leaves that were just cloverleaf tips with gradually larger rings and chains down one side and back up the other. The addition of a bar pin on the back allows me to wear it whenever I need a splash of colour.

I have another one in white made with size 30 thread that I have mounted on a hair barrette with green leaves of a similar kind on either side. Both of these get used regularly and other than an occasional swish through soapy water and a quick rinse when they become soiled I don't do anything to them.
Posted by Sharon at 6:05 PM 5 comments: