The pattern for the butterfly is here and colour coded. I don't usually colour code diagrams as they end up being uniform black and white when they are printed. The butterfly is done in 3 sections, body, left wing, right wing. In size 20 thread wind 2 shuttles CTM with about 1.5 yards on each shuttle of the colour being used for the body.. The first and last ring are normal rings and the others are split rings. I used a scrap piece of card about a half inch wide to measure the picots for the antennae to make sure they were the same length and tied a knot in the tip of each picot. After struggling with the first one, I used a  piece of thread through the tip of the antenna to give me something to hold onto while I tied the knot, then pulled it out when the knot was done.

For the wings I wound about 1.5 yards of the solid colour on one shuttle and about 1.5 yards of the variegated colour on the second shuttle. I hate trying to match up the colour distribution in variegated threads when I'm part way through a project so I tend to use more thread than I think I'll need so that I don't have to play match up. On the other hand I don't like to waste thread. It's a constant battle. "use more!/don't waste it!" I also don't use precise measurements. I generally pull off  an arm's length of thread and then add a bit more if I think I need it.

The second wing is done the same as the first wing, except that if you choose to do front side/back side tatting, you'll need to switch stitch order. Personally, I think life is too short to play around with fs/bs but do it the way you want.

Anyway, here's the pattern. Let me know if there's anything missing on it and just to make it easier to refer to both picture and pattern, I've added in the green and yellow butterfly again. 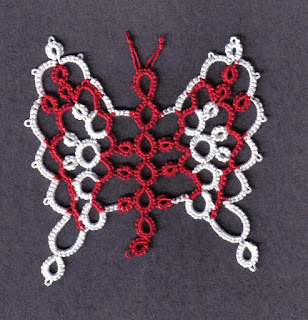 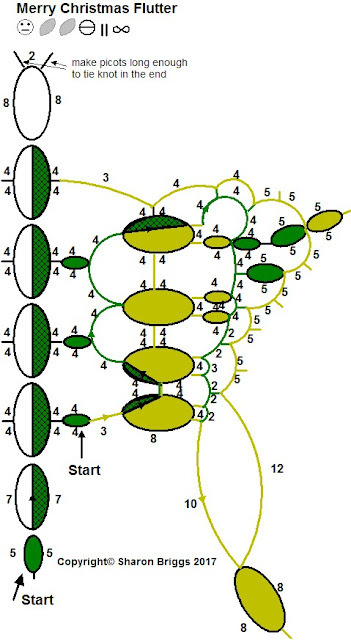 Edited: Green just didn't do it for me. I just had to tat it in red. So now the butterfly is in red and white.

I started modifying the pattern for the butterfly so that I could post it and it occurred to me that without some clear direction on when to switch shuttles, other folks might have difficulty with this one. I decided to tat another one in 2 solid colours so that you can clearly see which shuttle needs to be use. Turns out it's not half bad done in solid colours. I was using up bits of thread off these 2 balls and had to add in both the yellow and the green on this one. I used my standard method for adding in thread and it's really hard to see where the joins occurred. 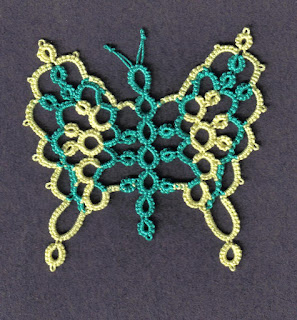 The pattern still requires hiding 6 thread ends, 2 for the body and 2 for each wing, which isn't bad when you consider it's done in 2 colours of thread. I'm thinking that if I tried really hard I might be able to figure a way of tatting it in one pass, but the mental gymnastics to do it might not be worth the effort in the end.

When I finally get this pattern done I may have to use 2 colours to make it readable, but that's a job for another day.
Posted by Sharon at 10:36 PM 1 comment:

For years I have been tatting snowflakes to send out with our Christmas cards to special people. You tat. You know that not everyone deserves the time and effort that goes into making a piece of tatted lace. So not everyone gets a snowflake. I do a few extras to give away to visitors during the holidays and as we all know, tatting is a great stress reliever so it accomplishes both keeping things calm and collected as well as providing little gifts. However, as the family ages there are more and more households without children and the need for the sparkle of Christmas trees. That means that I'm sending out snowflakes that don't ever get used.

As I considered this situation last year I thought that it might be preferable to send out butterflies that could be used all year long. For people who have Christmas trees they can still hang the butterflies. For those that don't, the butterfly can be displayed elsewhere or used on clothing or stored wherever they've been keeping the rest of them, which is hopefully not file 13 aka the circular file.

I have a butterfly pattern which can be done in one pass, but I don't really like the look of it. See what I mean? 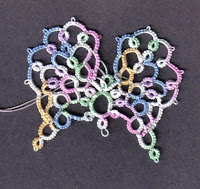 I took the basic design and replaced the body section.You can see that I was playing around with how the wings fitted onto the body. That meant that the body, which is done with split rings needed to be done with 2 shuttles wound CTM 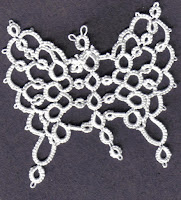 After working in size 20 thread I did it again in some size 80 using a solid thread colour for the body and the small rings that attach to it with a complimentary variegated thread for the rest of the wings. For the body I loaded enough solid coloured thread for the body and one wing. After tatting the body, I started the first ring of the wing and added in the variegated thread working from a section where the colours matched. (I used my method of adding thread which you can find in the sidebar to the right.) It didn't turn out to bad, but I didn't like the antennae. 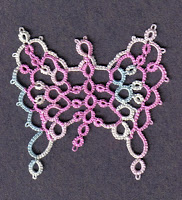 When I tatted it again in the size 20 Lizbeth thread I made the antennae longer and tied a knot in the tip. I wasn't really paying attention to the placement of the variegated colour except on the starting ring to minimize the amount of contrast between the first ring and chain of the wing especially since the split rings were probably going to show a marked contrast anyway. Then again, these were butterfly wings and I wanted a lot of variation.

On some of the later butterflies I made more of an attempt at matching the wings, but sometimes, with the way the colours were arranged especially on a colour like Summer Fun, it was almost impossible. Some match better than others, although with the solid colours being in fixed positions, that certainly helps.

I'm not at all anxious about front side/back side tatting, so I didn't get bent out of shape trying to keep everything going in the same direction. On the second wing I just turned it to the back and repeated. For anyone who is, they'd have to reverse their order of tatting for the second wing.

Here's what the collection looks like. Each butterfly is approximately 3.75 by 3.5 inches which is just about perfect for what I was looking for. 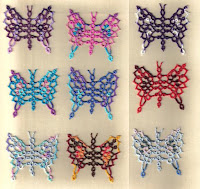 And here's a picture with the one done in size 80 at the top for contrast. I'm thinking I'll glue that one onto my cell phone. I have the pattern drawn out for what I started with, but of course I tweaked it as I progressed. At some point I'll adjust the pattern to what the final version worked out at and get it posted.