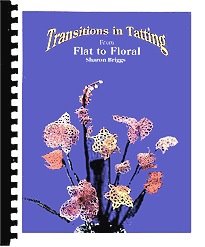 This is a long rambling post about newsletters and deadlines and such. Several years ago I published my first book which a lot of people really liked. Here's a picure of the cover. The cost and aggravation of publishing it put me off doing another book. I had a lot of designs percolating around in my head, like the 3D snowflake Georgia has in her class pages that she called the Superbowl Sunday Snowflake. I think 10 is the minimum number of designs I would put in a book and I had a dozen or so already tatted and drawn.

I didn't want to go through all that bother again and I started to think that maybe a newsletter would be a good idea. I had enough unpublished works that I could fill up at least 2 or 3 newsletters and in the intervening months I figured I could do a few more to finish out the first year. My sweetheart hubby created a web page to show the pictures of the tatting in colour although the published pages were black and white.

Things went reasonably well for the first couple of years. Bookkeeping for income tax purposes was a bit of a headache with the newsletter running from November and the tax year running from January. After the first year I started having people subscribe mid-year and that was OK for a while. Then I had some people renew early, and a few who skipped a couple of issues then renewed and things got really wild. I think I've managed to get things back on track now. Maybe.

Anyway The accident last year really threw things off. My stack of already created designs has been depleted. My energy and creativity have been at low ebb for way too long. I just don't have the energy to start over again when a drawing isn't right. I get a perfect drawing, start to add in the stitch count and have to scrap the drawing and start again because there isn't enough room for numbers. The turtle in the last issue had to be done about 6 times just to get the head and neck right. I found myself going cross eyed night after night just trying to get it to work out.

This last quarter I did the wedding album, lace for 4 placemats (which I didn't use) and I need to do something special for my brother's 50th wedding anniversary. I'm one month into this quarter and I haven't started the lace for next quarter and what I really want to do is pull together the lace for a book. I'd like to use the 25 Motif Challenge to create snowflakes and morph them into hearts and then morph them again into butterflies, all while showing the designing process. It's the kind of thing that I don't think will go well into a newsletter, but maybe it would.

Creating the newsletter used to be fun, but lately it's become a chore and I panic each quarter that I won't be able to create as much lace as I need as fast as I need. While my sweetheart is very supportive he's inclined to tell me to quit if it stresses me. Doing things electronically took a huge burden off. He's such a stickler for precision that he insisted on doing labels for every envelope and made sure that the labels were straight and the stamps positioned precisely. Anything less than perfection, just wouldn't do.

So now I'm thinking can I still do the newsletter? Can I handle the pressure? Should I change the format to allow doing a series on designing? Would the subscribers go for that? What if something else slows me down like the accident did? What do you think? Anybody want to comment?
Posted by Sharon at 7:41 PM 3 comments:

There's Life after a Newsletter! 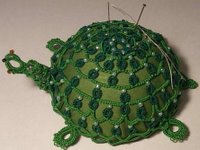 This was a very hectic summer for tatting. When the May newsletter went out I was already thinking of the August one. As I've mentioned, I was going to use the pink doily, but when I came to doing the diagram for it I discovered that my picture was way too blurry. Rob likes to sharpen all the scanned images, but sharpening the image actually blurs the stitches. I try to do one larger project and several small ones for each newsletter and at the last minute I had to replace the large doily with an alternate project. The alternat

e project is this Turtle pin cushion. Isn't he cute?

I decided this year that I should put some of the Christmas-y stuff in the August issue so that people can tat them in time for Christmas. I really like how the snowman turned out and the little angel was a great way to use the face beads I found in the Dollar store.

I had in mind to tat a lot of butterflies this summer, but with doing the wedding album and yards of lace for placemats and being sick and going to the doctor for lots of pre-surgery appointments and back to doing physio 4 times a week, I just ran out of hours in my days and energy to do much of anything when I was home. 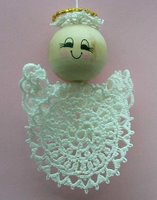 hallenge is going well. I'd like to get a bunch of stuff done for that. Actually, it fits it well with a book idea I've been thinking about and I'm itching to get started. Of course doing daily postings for the challenge is another reason why I haven't had a lot of "free" time lately.
Posted by Sharon at 2:50 PM No comments:

There aren't enough hours in my day 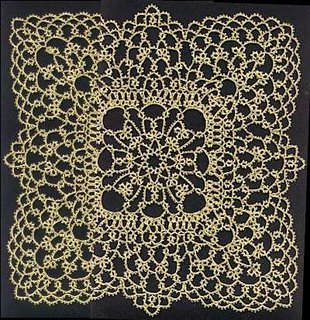 Updating the 25 Motif Challenge Blog doesn't give me a lot of time for updating my own blog. Not that I've had much time lately. Rob has been back to the doctor for more tests. I've been back to the doctor to see about getting some of the hardware out of my leg. I'm at Physio 3 times a week trying to get a bit more mobility in the leg and back for massage a couple of times a week to see if some of the kinks can't be worked out. All in all, there aren't a lot of hours left in the day.
I washed the tatting and the fabric to do the placemats, then laid out the fabric for cutting. The label on the bolt of cloth said 60 inches, but it's only 45 and I don't have enough fabric to make 4 placemats. So I'll do something else :-( I got 3 of 4 drawings for the August newsletter mostly done. One is drawn but the 3D part is giving me trouble. One of them I haven't even drawn yet and tonight and tomorrow are a write off.
I need to do some cooking/baking tonight or we won't eat tomorrow at the family picnic. It's time for our annual family reunion and each family brings a picnic lunch and then we have a corn roast for supper. This year we are combining the reunion with the family shower for the recently married couple. Did I mention that half of the invitations didn't get out and therefore no shower was planned ahead of time? Instead of placemats they'll be getting a tatted doily, not this one, my sister has it, but the same design done in cream. It's one of the doilies that went into the newsletter.
Posted by Sharon at 1:40 PM 1 comment: