Would you believe it's a cluny leaf gone mad? Two evenings of tatting a record length cluny, just to discover what doesn't work. I thought it might be an interesting way to frame a piece, specifically this heart. I ran out of thread half way around and had to start again. I can't make up my mind whether to finish it to see how it looks, to do it over again all in red, or just cut it off and forget about it. So here it sits, incomplete until I can make up my mind. I need more hours in my day. 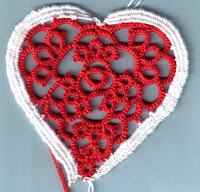 Join in the How to Design discussion

Have you ever wanted a tatting pattern and just couldn't find one that suited your needs? Do you like tatting, but you'd like to take it to another level? Have you tried to create something on your own but just gave up in disgust and threw it away? Do you ever feel like tatting designers must have some special ability that you just don't have?

Well it looks like you're not the only one because a few people are interested in a designing course so I'm pulling together some ideas for some 2 way conversation and I have set up the Yahoo Group Design-Tat for discussion. The Group has been set up for access by invitation only so if you are interested let me know so that you can join.

If you want to join, send an email to sharon#gagechek.com replacing the # with @ as I can't invite you without your email address.

Lest you think I've given up on square motifs, here are some of my latest trials that have been done in size 20 thread. I posted a challenge in January based on a rose motif and since I don't like to ask people to design something when I haven't given it a try myself, I did this one and since I also am on a "make it square" kick I just had to turn the rose into a square motif. None of these have been finished or blocked, mostly because there are mistakes that need to be cut off and re-worked. Gina posted a picture of a crocheted rose and I had to give it a try in tatting. It needs work, but I'm on a roll so it will have to wait until I can re-visit it. The rose shape would look better if the layers were done in different colours possibly with another layer on top. Notice the extra ring in the middle of one side. I started out with one idea and forgot by the time I was on the second side. By the time I noticed, I was on the last side so I just finished it. The white round is going to get cut off anyway, so I'm not too worried about it. I think it would be easier to see the 3D effect if it were in a lighter colour, and if anyone would like to do it and send me a picture, I'll send you the pattern. without the mistakes of course :-) 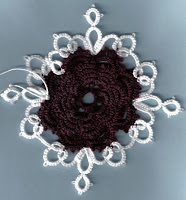 The next rose is surrounded with clunies which took forever to do, and now that it's done I'm not sure if it's something I want to repeat or not. I kind of like the way it looks although the corners need to be re-done. I think it might make a very pretty x4 to see what the intersecting corners look like. I'd do it, but I'm on a roll and I don't want to stop just yet 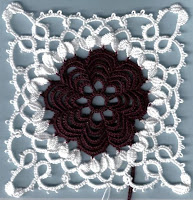 Same basic idea, but all very different. I have been kicking around the idea of doing an on-line course on designing tatting, except that, it sounds rather conceited, because what, after all do I have to teach? Maybe a zillion ways of not doing things.

Sometimes a design comes by trial and error. If you do a thing often enough you have to eventually get it right. Sometimes it's sheer dumb luck. You make a mistake and see that your mistake actually looks good, so you repeat the mistake. Then sometimes you design with purpose setting out a sketch or a mental idea and you follow the plan until you come out the other side.

I'm not sure if there would be any interest in a designing course, or if anyone thinks I have anything of value to teach, but if there is, let me know and I'll pull my ideas into a more coherent form.