I have added another image to the Design Challenge page. This one has some more definite lines which may make it easier for a new designer to work with. Work with the black or the peach and see what you can come up with. 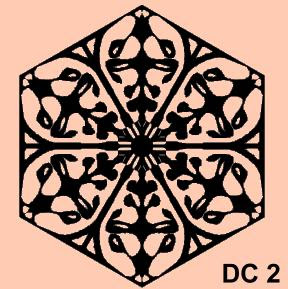 My personal challenge these days is getting out of the house (video), going anywhere without a car, keeping up with the 25 Motif Challenge, still tracking down the last few packages on the Round Robins and getting the Tatted Lace Pattern Collection done. Thanks to the wonderful folks who have volunteered to help with the 25 Motif Challenge I think I can keep my head above water. 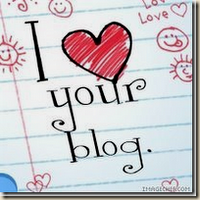 The concept behind this award is to link to the person who gave you the award and to link to seven blogs you love. I thought that this time I would link to some of the non tatting blogs I like to visit. In a Minute Ago, Lost Arts Studio, Teeny Tiny Cabin, 4:53 AM, Patra's Place, Annie's Crazy World, Hello my name is Heather,
Posted by Sharon at 5:58 AM 2 comments:

The View From Here 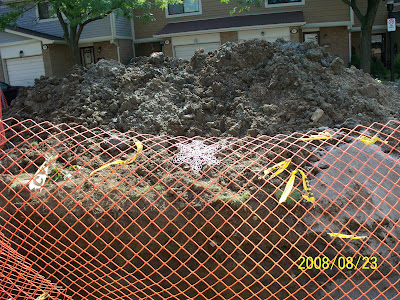 This is the view from my front door. 2 weeks ago on the 9th, we were awoken to the news that the water main had burst 2 doors down. After they dug down 10 feet through the road they discovered that the mains were buried under the lawns and driveways of our townhouse complex. So they moved over and dug up the neighbours driveway, which incidentally was where the water was coming from in the first place. Then the rain started. Ever tried finding a water leak in the pouring rain? 10 hours later there was a bandaid on the water pipe and the emergency crew left for the weekend. Monday they were back to fill in the hole and replace the gravel for the driveway base.
We were waiting for them to come back with the asphalt to finish things off, but on the 19th water started pouring out from under the gravel. This time the crew came back and dug up the lawn and a 30 year old tree. That was sad, but the tree was in bad shape and had to come down soon anyway. The mains looked questionable, so they decided to see if the dug a little further if the pipes would get better or worse. After pulling up our driveway the found another trickle of water, not under our driveway, but coming from further up the street. (Thanks guys for the unnecessary driveway replacement!)

So this is my current view and it's likely to stay that way until the decide if they want to dig up more pipe, which I would really prefer, or fill in the hole and hope for the best. I'd rather have it all done and finished, than have half of it done and have to wait for the other shoe to drop.

By the way, a closer inspection of the picture will show my latest piece. It was supposed to be a snowflake, but it grew to doily proportions. Rob has named it Elephant Flake.
Posted by Sharon at 8:06 AM 4 comments: