In case you've been wondering where I've been....

I've spent a lot of time with hubby out in the garage recently. Not because I like the garage, but 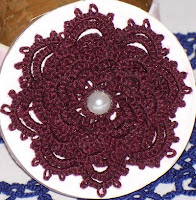 because we've been trying to get the car going. We made a quick trip out to the store to pick up a prescription for hubby and the car quit on us. In the left turn lane, at rush hour, at a busy intersection. We had to get out and push it around the corner and half way up the block before we could get it off the road. Thankfully a landscaper cutting the grass alongside the road helped us to get the car into the parking lot and out of the way.

Our car has served us very, very well. since we bought it in 1988. We checked the records and since 2001 we have paid $4298.00 in repairs or $537.25 average per year. That's above the regular gas, and oil change maintenance stuff that you'd pay on any car, but when you figure that the car is over 20 years old and it's been paid off for a long time, that's not too bad. What we've paid in repairs in a YEAR is less than one month's payment on a new car. This time however, we're not sure what's wrong with it and if it can be fixed. This time it m

ay have well and truly, bit the bullet.

Buying a car doesn't seem to be in the budget. I suppose it might be, but I don't like the idea of going into debt just to be able to run to the store when I want. We've been looking at used cars and looking at what we can afford, but what you can buy with $0, isn't much.

Holding the light for hubby while he pokes and prods the vehicle has been interspersed with collecting up tatting bits for display to be used at the open house Friday. It was apparently a roaring success. All I know is that I tatted and gave away a lot of 4 ring butterflies, and talked to a lot of seniors about taking tatting classes in September. This is a paying gig, but it doesn't pay a lot. Which is a pity because getting paid to teach tatting is my cup of tea. They have set a minimum of 6 people for the class so if we get 6 or more I'm teaching and if they get fewer, I'm not. I'll let you know how it goes. They've set it up as a 12 week course, so if they stick with it for 12 weeks they will be truly hooked. Mwahaha...

In between these activities I have been trying to get some patterns into publishable format. The patterns are drawn and I'm down to the "pull it into the publication" stage. I had a set order in mind, but I've hit a point where I either have to change my order around or I have to create some new smaller designs as filler because I've hit a point where the designs are taking up three quarters of a page. That will mean I either have to leave large bare spaces or try cut drawings in half which I don't want to do. I have been struggling with this book for far too long, partly because I took out a chunk of time in the middle of it to make replacement pieces for some folks whose tatting got lost in the mail, and partly because I have overextended myself taking on things I shouldn't have. I already had a full plate of stuff that I had to do when I took on a bunch of stuff I wanted to do. Now I'm paying the piper in having to push back the publication date of my book. 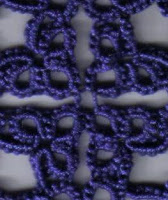 In the mean time the new design course is off to a good start. It never really occurred to me that I had much to teach about designing. I know I've learned from some earlier mistakes and there were a few things that I've figured out. When I started the first course I thought I might get 2 or 3 people that wanted a few pointers. When 60 people signed up I was flabbergasted. Seriously, I thought I might do 2 or 3 lesson with some pointers to get beginners started, but when I actually sat down and started to write out the lessons, there was quite a bit to go through, so I guess I did have something to teach after all. 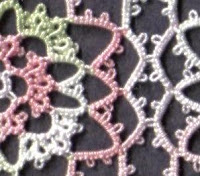 The pictures shown? They're bits of the new designs of course.
Posted by Sharon at 6:23 PM 5 comments:

It's the colour of these morning glories. Typically they come in pink and purple, so I think the blue variety must be some kind of a hybrid. Every day the vine is covered with blooms that die by evening. Then the next morning you are greeted with a whole new set of flowers. They are blooming so profusely that you can just barely see my outdoor tatting spot. Earlier in the year the clematis forms a large column of purple against the wall. The backyard is shaded by tall buildings behind and a large tree overhead, so very little grows back there, but in the front yard I can be surrounded by flowers all summer long. I wonder if I can bring this pot inside and enjoy these flowers throughout the winter? Failing that, I will save the seeds and start another one for next year. 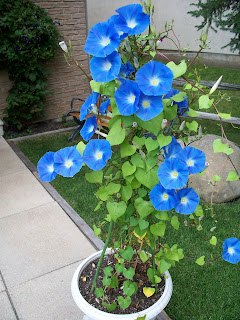