Designing on a whim


My 4 version parallel Bible is a B-I-G book. I like having more than one translation side by side because it gives a better indication of what the original text meant. The Old Testament was originally written in mostly Hebrew and Aramaic and the New Testament was written mostly in Greek. I don't speak any of those languages and have no plans on learning them, so reading in multiple translations often helps clarify things. Of course such a large tome means that the average bookmark just gets lost in it.

I finally gave up on hunting for my bookmark inside the pages of my Bible and set about making one long enough not to disappear. I wanted something simple, pretty and really long. I was working on a design for another project that made a fairly broad band of lace and I thought it would make a good choice because I wouldn't have to modify it much.

I selected 2 solids and a variegate from my stash of size 80 threads and went to work. I used the variegate red/pink/green for the large rings with the solid pink along the outside. Then I used the solid green in the split rings down the middle. The threads were mixed brands of vintage Coats and Clark and Star which might explain why the split rings down the middle are smaller than they ought to be.

If I were doing it again I would make the split rings larger. As it is, when I noticed that the green was tatting up smaller, I left larger spaces between rings. At the ends I tatted large inward rings with the variegated thread and large outer rings with the pink and then just repeated down the second side.

Since the bookmark is really long, the wide band looks proportionate, rather than long and skinny. I didn't want a skimpy tail on it, so I just continued the split rings ending in larger rings to make a cross at the end which saved having to make a tassel. I like the look of tassels, but they're time consuming to make and I wanted something quick. Now I have a bookmark that's so long, at least one end will stick out where I can see it. 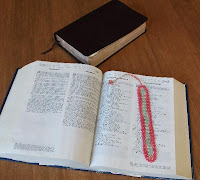 It's nice to be able to make whatever I need without having to search through dozens of books or wait for an online shipment to come. One of the reasons I stared designing lace was that even when I looked through books I didn't always find what I wanted.

I dabbled in designing, right up until I made the lace for my wedding. At that point I got over being timid about doing my own designs and jumped in with both feet. One of the things that I do with the Design-Tat course is give people the building blocks necessary to jump in the deep end and design their own patterns. It's a very liberating feeling, being able to make what you want without a pattern.

If your interested in trying your hand at designing, there's a new Design-Tat course starting. You can sign up for it here. The cost is $15 Canadian payable through PayPal. A lot of people wanted the drawing tutorial, but didn't need the designing class, so it's available separately, and you can find it at the same link.

I've been at it again. For the last few years I have been doing an online tatting design course, giving people a background in how to create their own designs. A natural extension of that was helping people to take their new creations and turn them into visual patterns by using drawing software.

The first time you try to make a tatting pattern using software, the results can be hilarious. Or tragic. Depending on your temperament. How do you get these shapes on screen? How do you get them where you want? Is there some way to have control over how things look? Is there a right way and a wrong way to do it? What about using colour? Should you make your rings teardrop shape or oval? There are lots of questions and of course, the drawing software help files aren't really geared toward tatters. 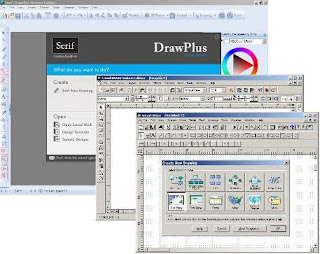 I initially created a basic tutorial to help budding designers get their patterns into drawing format. As the classes progressed I added more and more information complete with screen shots of what the software looked like and where to find pertinent features. Of course things were complicated by the fact that the software I used for class, which was free, had significant changes every time I did another design class.

After re-writing the whole thing for the fourth time. I decided to change to do a more generic format. The tutorial still has screen shots showing you what you need to do and where to find things, but it's been done so that if the software that you use, isn't the free one, or if you're on Mac or Unix instead of PC, you can still find what you need and know where to look for it.

Since the information is now more detailed and more comprehensive it's been put into a single large PDF file. You no longer have to wait for the course and get the information piece meal, you can just download the whole tutorial and get to work. 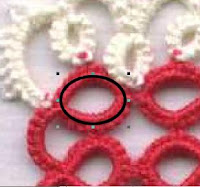 There's everything in it, from how to draw your first ring, to creating designs with the software. 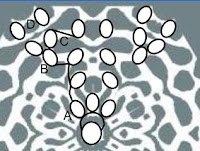 If you're interested, the PDF is available from my store for $15.00 Canadian payable through PayPal. The link is here, under Drawing Tutorial, the first item on screen.