So close, and yet so far

6 measly stitches from the end of an all chain row and I've run out of chain thread. The only remedy is to back up to the last join and finish it using a very long split chain. And for all of that, I'm not even sure I like the design or that it's going to lay flat. Two or three more pieces to finish, photograph and diagram and the new book's ready. 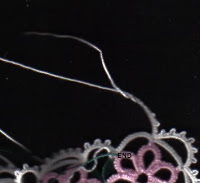 As mentioned in an earlier post, I started teaching a basic course on how to design your own tatting patterns in March. I was overwhelmed by the response to the course which has recently been completed. I planned it as a proper course with lessons and homework and people jumped in and started creating their own unique designs. It's amazing how a group of people can take the same basic design elements and create totally different laces.

Some people found out about it too late to join in, so I am running the course again. The lessons are posted to the Design-Tat blog, but the follow up is all done in the Yahoo Group. To take advantage of the course you need to belong to the Yahoo group which is by invitation only. I made it invitation only not to exclude any interested tatters, but to keep out trolls and spammers. If you are interested in joining the course which will start next week, please send me an email at sharon#gagechek.com change # to @ and you will be sent an invitation.
Posted by Sharon at 4:45 PM No comments:

KrystleDawn posted a challenge for tatters to show pictures of their tatting corners. I have to admit I'm a poster child for "tatting in my pocket". I tat anywhere and everywhere, I tat at the computer and I draw tatting patterns at the computer. The current tatting clutter on my computer desk is mostly comprised of the test tatting of the pieces from the Design-Tat course. The 3 balls of thread are for a bookmark I'm designing. 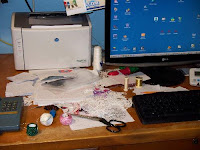 Most of my tatting supplies are stored in a 6 foot by 3 foot cabinet and in 3 drawer filing cabinet wedged in beside it. The filing cabinet holds the size 10 threads, that I don't use very often. People keep giving me bags full of size 10 thread and this is just the coloured threads. I have a garbage bag full of white balls stored in the closet. As you can see the tall cabinet holds several smaller containers with drawers for different sizes of thread, my small collection of tatting books , the blue chest in the middle holds embroidery threads and the boxes beside it hold miscellaneous tatting supplies like beads, bangles, findings, hankys and other things to put tatting in or add tatting to. It also houses the binding machine and supplies for book publishing. 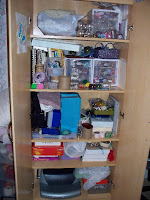 The dresser is an in between station where pieces get dropped while I think about how to proceed with a pattern or where they sit until I can mount them on my 3 foot square blocking board which is stored behind the cabinet. Small things can be blocked on the ironing board, but larger items, like doilies, hang off the edges so they need a bigger area. The bed makes a large surface at just the right height for holding the blocking board while I pin things out. So finished tatting often sits on the dresser until I have the time to block it. It gets thrown back on the corner of the dresser until it can be scanned or photographed and again until the pattern gets drawn out if I haven't done that first. It gets put back on the corner when it's done until I either give it away or find some place to store it. That's what this mixed stack of stuff is doing here. 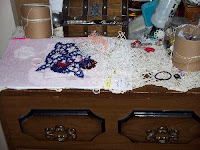 The corner where I do most of my tatting is here, on the love seat. The light is appalling, but I tat as much by feel as by sight, so it isn't a big issue unless I'm using size 80 an a dark colour. I mostly only need to see to do joins. I have 2 projects sitting there at the moment, a motif I'm working on in pale yellow where things have gotten to the point where it needs my undivided attention and the bookmark that requires less attention in pink. The white and green threads will get added later, they're still upstairs by the computer. 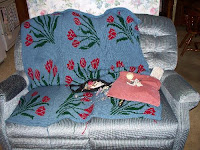 When the weather is nice I grab the parrot and go sit on the bench outside to tat so that both of us get a bit of fresh air, so I guess you could say that my tatting corner is really all over the house.
Posted by Sharon at 10:13 PM 6 comments:

I have been tatting, not that you would know it from reading here. Some days I feel busier than a one armed paperhanger with so many things on the go that require my attention it's hard to prioritize.

Days always go better when I'm up before hubby because it gives me some quiet time to read my Bible and talk things over with the Lord before the busy of life gets in the way. We take time to read the Word and pray together daily, but I still need the personal time with God and really notice when I don't have it.

The 25 Motif Challenge can take up a lot of my time if it's not handled regularly. I thank God for the many volunteers who have stepped in to help. As the interest in the challenge has grown, keeping up with it went from a pleasure to a pain and without the wonderful folks who volunteer their time it wouldn't be nearly as much fun. We have recently added some new volunteers and that takes a bit of extra time sending them out the information they need and answering questions they have. The Challenge has clearly kept people tatting and created another point of contact for the tatting community.

The Tatting Round Robins have been popular and you'd think that once everyone has their partner information, that my involvement would be over, and most of the time that would be true. The very first group of round robins I co-ordinated ran into all kinds of hiccups. Some of them went off without a hitch and others experienced all manner of road blocks, some of which are still being sorted out 2 years later. Many of these little speed bumps have been related to unexpected accidents and illness that have hampered people from completing their obligations.

If you are someone like my sister who checks email once every week or two, sorting things out can take a very long time. In the interim I can get 5 messages from other participant who are online every day. Last year the individual groups had leaders that collected the pictures for posting on the blogs and helped herd everyone toward the finish line. The most recent groups have been plagued with not only illness but also technical problems due to crashed computers.

This year I started the Design-Tat group to help people create their own designs. I'm not an expert, but there are some things I've learned from doing it wrong the first time, that may encourage other people to spread their wings. I had though of doing it as a paid class because of the time involvement, but I didn't because A- I didn't think I had all that much to teach, and B- I didn't think that there would be that many people interested. I had anticipated that 2 or 3 people might want to know what I know and I had to cut the group off at 60 because there was no way I could personally answer the design challenges of that many people. Really, I think a lot of the folks that joined, just did so out of curiosity, but I have another dozen people that have emailed since asking if they could join. So I'll be doing another course soon.

On the work front, hubby has completed some new software and I helped out with Beta testing and writing the help manual which required setting the software up in a logical manner for doing screen shots that could be incorporated into the manual and the web pages. These had to be done twice. The first were done in a small size for the manual and the second set were done larger and created with transparent backgrounds for use on the web site. We have been fortunate to already have several users promote the software, so we are very encouraged by that. 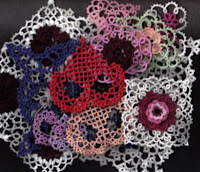 In the in between minutes I have been doing some tatting that will go into an upcoming book. I have the designs done and I'm tatting up some additional samples for filming. That's one of the reasons that there haven't been any pictures, as it's all a surprise.
Posted by Sharon at 1:51 PM 2 comments: 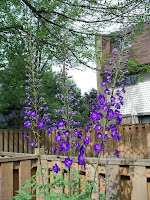 Yesterday we had this beautiful tall delphinium just coming into full flower. The top of the fence you can see here is just about the height of my nose. My sweetie took the pictures and I was hoping he'd get a full shot of the entire plant instead of just a close up of the flower. It's a vivid splash of colour that comes back year after year. I got smarter last year and supported the bottom half of the plant in a tomato cage because in full flower it's very top heavy.
Last night we had a thunder shower that blew it over. We tried tying it up to a stake, but what kind of a stake do you use for a pant that's nearly 7 foot tall? We got it tied up and I turned my back for a minute and it broke in half and fell over again. So today I have this gorgeous bouquet on my table. I'm hoping the rest of the buds will open. I don't mind whether the flowers are in the garden or on the table, just as long as I can get to enjoy them. 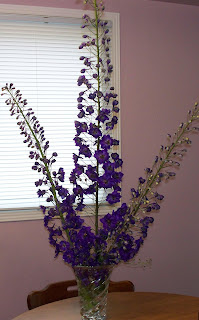