The other day hubby was reminded of the bookmark I'd made for him and wondered what had happened to it. That bookmark was made in a 3 strand Opera thread size 20, which is soft enough that it's OK for a regular book, but too thick for the typical onion skin pages of a Bible. So I made him another one is size 80 thread.

I looked through my stash and noticed that most of the colours are pastel and not very masculine. The best I could do was a solid black with a variegated black/white. I had in mind a centre row of 4 ring motifs to form a column of diamonds in a solid colour with an outer row to finish it. The black, black/white combo was too somber, so I went with a centre row in white.

I entertained lots of possibilities for the outer row, but in the end settled on an understated row of black rings and a variegated black/white chain.

I finished it off with a lock chain in the variegated thread with a couple of diamonds and a tassel that used up the unfinished bits of thread on the shuttles.

Hubby seems happy with it and doesn't seem to mind the lack of any eye popping colour. If I'd had a bright robin's egg blue (his favourite colour is blue) I'd have used that in the middle, but the washed out pale blues I have just didn't have enough punch. 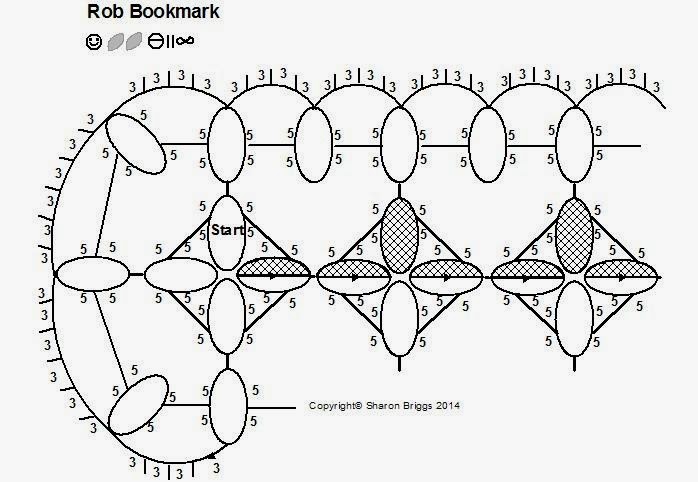 or Pink hanky, part 2. You may have noticed a duplicate posting about the trials and tribulations of tatting with variegated thread. That's what happens when hubby is trying to hustle me out to the store and I don't pay attention to what I'm doing. What I meant to post was this part about the finished hanky. 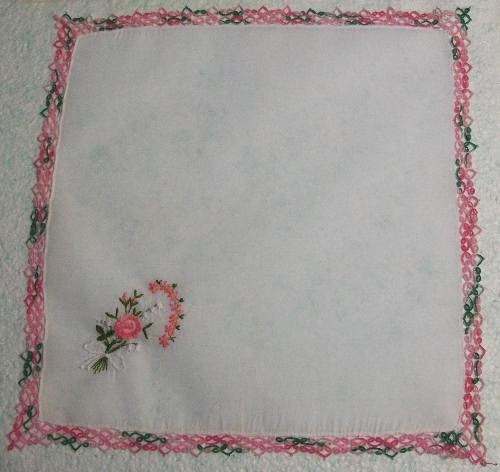 When I finished the first row and started the next round I used up that left over bit that had been wound around the ball and of course when it ran out I had to join in new thread, but fortunately the splice happened in the long pink section.

One thing I wasn't thrilled with was that in the section where the green pooled and I had green on top and bottom, it pooled again on the second row. There's not too much that can be done about it except maybe ripping it out and starting again. Thankfully, I missed out on the perfectionist gene and I'm OK with letting it sit.

All of the angst over how to handle the corner turned out to be a non-issue. I just repeated the same thing on the second row and it worked perfectly. I had started the second row at the green bit and when I came around to join into it, I just happened to hit another green bit, so there wasn't any need to adjust it at all. 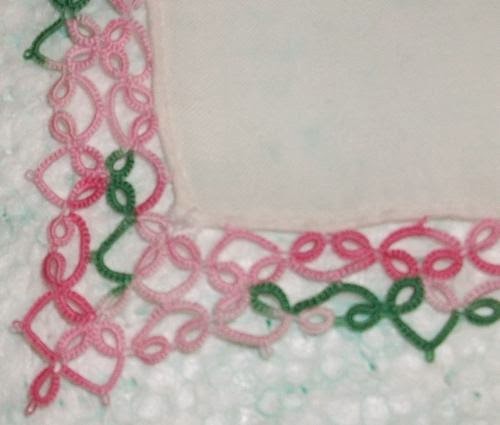 I was also pleased with how the thread colour complimented the pink embroidered flowers. So I guess it was a success after all. I have a few more hankies to add edgings to, but right now I'm working on a bookmark which should be finished today or tomorrow. 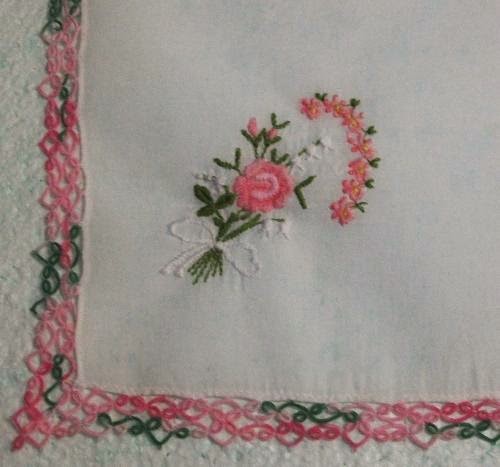 Edited to add: One other thing I thought I'd mention, The 2 rows of edging took almost an entire ball of size 80 thread. I have a full ball of the same thread and the ball that I used looked to be the same size. I was down to the cardboard core when I finished. There's enough left to make a bookmark or something, but that's about it.
Posted by Sharon at 10:13 AM 9 comments:

Are you a shuttle hoarder?

I can see, when you are learning to tat that you need to try out different types of shuttles. You might love large shuttles, or you might have small hands that need a smaller shuttle. You might try out a post shuttle without a hook and then find that working with an attached hook is easier. Or you might use a shuttle with a hook and find that it gets caught in every stitch. So you try out a few varieties to see what you like.

If you fall in love with post style shuttles you will inevitably acquire a few more since pairs of them will be attached to projects and half full shuttles will require emptying. Bobbin style shuttle are emptied by popping them out and letting the thread unwind so fewer shuttles are required.

Some connoisseurs will want to have one of every kind, just because they are collectors. They will haunt antique stores and flea markets looking for that unique shuttle to round out their display.

Then there are the hoarders. They can't pass a rack of shuttles without buying one. Or 10. If there are shuttles available online, they need one in every colour. Decorated shuttles are bought for every occasion, in fact occasions are invented for excuses to buy more. There are shuttles all over the house. There are some by the comfy tatting chair and a few on the computer desk. Every craft bag a purse has some stuffed in it. There are some stuffed down behind the cushions and peeking out under pillows. There are boxes stuffed in cupboards full of them. Some are hiding out in drawers, some dangle by a thread from pockets. The cat chases others under the sofa, and the dog has left teeth marks in one or two. The hoarders never saw a shuttle they didn't like.

Better watch out, there might be a hoarder near you. Maybe it's time to go count your shuttles.