I mentioned that I've designed a whole bunch of snowflakes, many of which I've given away without diagraming them or even taking pictures of them. When I get on a snowflake tatting jag I often finish them off drape them over the lamp shade and hand then out to anyone who comes to visit over the Christmas season. So I don't really know how many snowflakes I've designed, just that it's been a lot. I do tend to keep the designs that I've published mostly for copyright purposes.

I hardly ever tat from other people's patterns because once I got into the habit of designing it was easier to create what I wanted than to take the time to follow a pattern. (There it is, my secret is out, I design because I'm too lazy to read.) The other day I pulled out all of the ones I've kept and took a mug shot of the lot of them include four 3D snowflakes. Arranged more or less from the smallest to the largest. 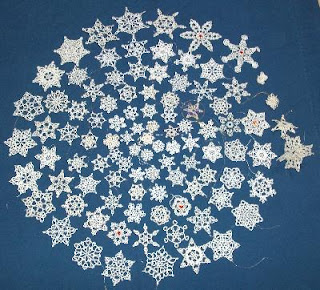 Just for those of you that are going to count them to verify that there are 101 flakes, here's a 10 by 10 grid of them. 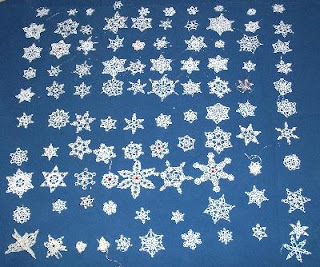 That's a lot of tatting and a lot of designing.

I was thinking of designing something for spring and the first thing that comes to mind are flowers like tulips and daffodils, but I've already been there, done that.  I thought about tatting a 3D robin but I'm not sure how to tackle that one and I don't have any appropriately coloured threads. Maybe I'll let my sub conscious kick that idea around for a while and see what happens.

I've fallen into a snow bank and I can't get out! Of course I'm not trying very hard. I was sitting around after the festivities and these 3 fell off the shuttles. No diagrams yet and there may not be any forthcoming. 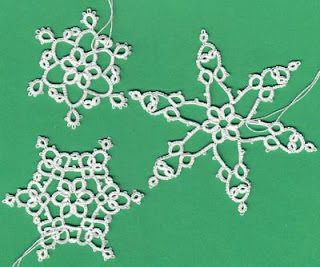 While doing the last one I thought I was repeating myself, but it was only similar to 17 and not exactly the same. When you see then side by side they don't look anything alike, but when you're tatting them, it's a large ring with 2 little ring joined into it and a little ring off the top of a chain which gave me a sense of deja vu. 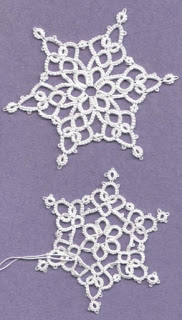 I'm glad I kept going because I like the last one better. I can't really give comparative size, because I ran out of the ball of Lizbeth size 20 and the last 3 were done in Aunt Lydia size 20? 30? Different anyway.