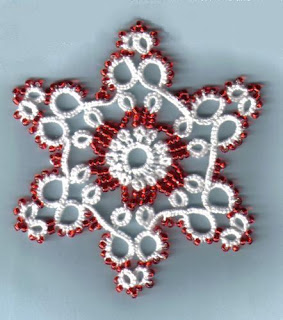 This is a modification of a pattern that I designed as a thank you for Nell Corns. It starts with a central ring and a split ring to climb out into the first round of single shuttle rings and uses 3 seed beads as spacers on the bare thread. The whole design takes 204 beads so I found it easier to put the beads for the first round plus the 12 used in between the large and small rings of round 2 on one shuttle and the remainder on the second shuttle, that works out to 81 beads on shuttle 1 and 123 on shuttle 2. You can work with all but 15 beads on one shuttle, but then it becomes hard to manage. When I'm working with one colour or type of bead I always load a few extra on each shuttle. That way, if I miscount or find a misshapen bead I can break it off and not worry that I won't have enough to finish.


Complete round one with 3 beads from the second shuttle and end off with a split ring. Then begin the next round with a large split ring loaded with 5 beads. The picot on the split side of the ring will be used to hold the 2 sides of the points together. 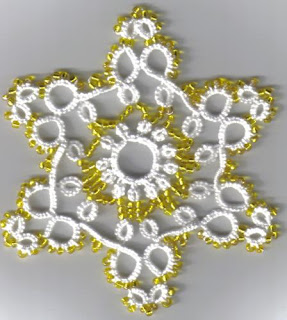 There are 2 beads between the large and small split rings, one from each shuttle and 2 beads on the outer side of the small ring. After the first small ring, there are 3 beads that make the outer point of the motif. The second side of the point is a mirror image of the first side. The large rings are joined to one another on
the split side of the rings.


The join to the outward facing ring of the first round is not a shuttle join. Switch shuttles to make the join. Leave 3 beads in the middle of the chain and finish by joining to the next outward facing ring. Repeat until all of the points are completed.


This is a simple pattern and worked in size 20 thread is about 3 inches across from point to point. Made with silver lined beads, it's very sparkly and eye catching. Here is the pattern. 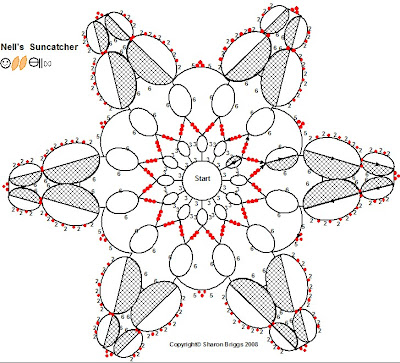 You may have noticed that I haven't been posting much lately and for the one or two who wondered, here's what's been going on. During most of August our front yard was dug up due to the burst water mains. Twice during that period the driveway was unusable and I had to use a bicycle to get around which meant that just doing things took much longer leaving me less time for other, more interesting things.


Then a number of local folks decided to get a craft group going for socializing and for teaching, so I have been showing some people how to tat. The ladies in this group are keen on finding ways to sell their finished goods and I have been coaching them on how to use the internet as a selling tool. This has resulted in some one on one hours spent showing them how to set up PayPal accounts, showing them how to use things like Ebay and Etsy, helping them to take pictures of their goods, explaining why it's important to crop out blank spaces and re size their images and showing them how to use software to accomplish this. 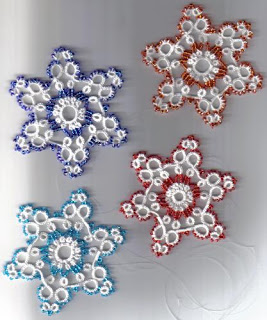 I mentioned that I was discontinuing the Tatted Lace Pattern Collection newsletter and a number of people have taken that to mean that I wasn't going to be designing any more. That is far from true. I have a small doily completed, in addition to the elephant flake seen in the disaster photo, 5 more motifs and part of a bookmark designed and recently I have been stuck in a rut doing these beaded snowflakes. For some reason, this design just makes me happy and I want to tat them in a whole rainbow of colours. The pink one is half done and the beads are already loaded for the yellow version and I have an idea for a necklace that I may or may not do.


Some of my time has been spent just being there. Hubby, who has been diagnosed with Meniere's was relatively okay during the summer but as soon as the colder weather hit, he started having drop attacks again. Let's just say life's not fun.


On another note, I sent out notice that another set of round robins would be starting and I've been trying to match people up and get mailing addresses to get them started. In the middle of this I was reminded that some of the tatting from the earlier round robins hadn't made it home yet, so I started chasing them down.


In the mean time the awesome volunteers on the 25 Motif Challenge blog have been keeping everyone up to date. It's a good thing too, because I certainly haven't had any time for it.
Posted by Sharon at 4:47 PM 7 comments: