Some time ago there was some discussion in Toronto about creating an afrocentric school. The idea was a school especially for black people that addressed black history and black culture in a way to engender pride in black heritage. I thought, and still think, that it's a really stupid idea because the curriculum in this specialized school is not what the rest of the population will be taught and when the children are re-integrated into the rest of society, they are going to believe that everyone learned the same things and it will be a bit of a culture shock to find out that the rest of the population doesn't share African roots. It makes much, much, more sense to me to bring the highlights of that heritage and those cultural issues into ALL of the schools so that everyone can be enriched by them. The children with African heritage can take pride in where they come from and the other children gain a greater understanding. Of course they didn't ASK me, and they went ahead and opened the afrocentric school and they are having some problems with it now.

Today they are talking about opening a gay, lesbian, bi, trans gender LGBT high school, (that has already been dubbed the queer school). Which has got to be a really stupid idea on so many levels. The thrust of the proposal is to create a safe place for students. Wait a minute, back up here. A safe place for students. So if you are fat and being bullied because of it, does that mean we need a separate school for fat kids?

The issue isn't that we need to create exclusive place for children and teens, the issue is that we need to teach tolerance and understanding of differences. There won't be specialized work places for people based of race, religion or gender, so it just makes a whole lot more sense to teach the younger generation growing up how to get along with one another. That IS one of the purposes of school. It isn't isolation we need, it's inclusion.

OK, I'm getting off my soapbox now.

What makes a good pattern?

I haven't been keeping up with the blog, I have been tatting a little, but not a lot. I saw a comment the other day about Anne Orr's baby bootie, or as it's called in the book, Baby Socklet and Shoe. I've tatted it, but the design is a stinker, at least , in my opinion it is. It is pretty and it looks all right when it's finished, but it's one of those piecemeal patterns where you tat a piece and lay it aside, then you tat a different piece and lay it aside, then you connect the pieces together by doing yet more pieces. Pieces drive me nuts. 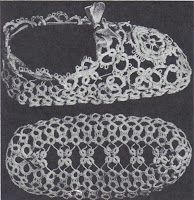 When people talk about a good pattern, or a nice pattern, or a "go to" pattern, They are often talking about very different things, but they use the same terminology. It must really confuse new tatters. A lot of people looking for something to tat for a christening often choose this pattern. It isn't especially difficult and if I remember correctly it takes about 11 hours to complete. I remember the number because someone asked me what I would charge for making them and I had to figure out the hours and I can't remember if that was for one or the pair, although I think it was the pair. What I DO remember is that having to do the bits and pieces really irritated me, so much so that I did my own version, following along the same lines, but working the whole thing in only 2 pieces. The Anne Orr bootie calls for size 30 and I used a size 50 in mine 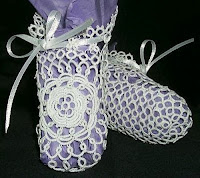 One of the things I realized as I was finishing it off, is that thread doesn't stretch like yarn. I know. You'd figure that after tatting for all these years that I would recognize something as obvious as that, but I just didn't think about the simple things, like getting a non stretch bootie over a tiny foot. Happily, I remembered this vital piece of information just as I was working on the last couple of boot rounds and  instead of working around the top of the bootie in a circle, I stopped at the front and worked back over the row just done, which meant that if I had been doing front side/back side tatting it would have been a real nightmare because I would have had to do everything on the row backwards. I don't do front side/back side, so I just turned and kept going.

Is it a good pattern? Maybe. It's pretty enough and it doesn't have lots of pieces, but if  front side/back side is a major issue for you, you'd definitely hate this pattern.

If you are just learning to tat, a design that uses just simple rings and chains is going to be a great pattern, but if you are experienced, that kind of pattern will drive you around the bend with monotony. If you need something for a quick gift, you might gravitate toward something that has a simple design, but if you want to make something with lots of WOW factor, you might want something more elaborate. If you were making a gift for another tatter, you might choose something with lots of clunies, because you know that another tatter will appreciate the time that goes into them, but a non tatter might be just as impressed with something that just uses chains.

Sometimes your definition of a good pattern is neither how the finished lace looks, nor the techniques it uses, nor how long it takes to complete, but depends solely on how the pattern is written. Some people don't like using written patterns, and some people can't stand visual patterns.

Now and then, people will refer to a design as being their "go to" pattern and often that simply means that the pattern is their first choice to tat, just because they have it memorized and they don't have to go look for the pattern or refer to a page when they are tatting. That doesn't mean it's particularly pretty, or quick to tat, or well written, it just means it's memorized.

So what about you? What makes a good pattern for you? Is it the visual appeal of the design? Is it the way that it's written? Is it the techniques involved? Or is it something else? Inquiring minds want to know.
Posted by Sharon at 8:08 PM 7 comments: