Some of you saw the choker that Fox test tatted for me. In putting together the patterns for the book it occurred to me that this design had a couple of  features that might have caused some concern and my description might have added to the confusion. Thankfully Fox was able to identify the areas where I needed to tweak my drawings and make them more understandable. The new book features designs for summer that can make bracelets, anklets or chokers. Here is the Triad design as an anklet: 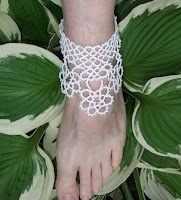 And here it is as a choker:

This book will have 10 patterns that can be used several ways  and without beads or finidings several of them will work as bookmarks.
Posted by Sharon at 2:07 PM 8 comments:

Thinking out loud and looking for answers

When I started the design class a few years ago I waffled between thinking that I had a lot to teach and thinking that it was presumptuous of me to think that I had anything to share. Then I started the first class and had to cut off the participants when the class grew to over 60 people almost over night. I ran a second class for the handful of stragglers that didn't make it into the first class but again had to cut it off at 60 more participants, when the group got larger than I thought I could reasonably handle. As I started writing out formal lessons I kept thinking, "I should mention this", or "How do I explain that situation?" and little by little it expanded so that now, to adequately cover everything it takes about 6 months and the "stragglers" just keep on coming.

I structured the classes so that each lesson builds on what went on before in a logical progression so that even if you haven't ever designed anything before, you can successfully create your own pattern. For some people designing comes as easily as falling off a log, but for others it's a little more challenging. But whatever your starting point you CAN make a successful design just by following the simple steps we take in class.

Once you have created a design, you then have to get it down in a formal manner, and the second section of the course deals with using drawing software to create a pattern. For this purpose I created a step by step tutorial that shows you how to find the necessary features in drawing software and use them to the best advantage. Learning how to effectively manipulate a drawing program can have a steep learning curve.

The third section of the course deals with more advanced things like, using drawing software not only to draw your pattern, but also to actually create new designs. Then to take ideas and push the boundaries to see what more you can accomplish.

More recently, some of the folks who have joined the class are already able to design their own patterns, and they are more interested in the latter sections of the course. That means that while the rank beginners are struggling with learning to walk, these folks are champing at the bit to get running.

On the surface, that suggests that people aren't getting enough time to do everything, so the last time around I tried giving people more time, but that doesn't seem to be the answer. The numbers of people getting their lessons posted still stays the same.

So, for the last year I've been kicking around a different idea. I'm wondering if it might be a good idea to break the course up into 3 separate courses. One course, just for how to start designing, a second course for learning to use drawing software and an advanced course for people who want some design challenges and some direction on where to go from here.
Since these would be less encompassing courses they would be of shorter duration and since they would cover different subject matter people could just take the section they were interested in. All 3 courses could even run simultaneously.

This would let me expand what's covered in the individual courses to cover more details on a narrower scope of information which might allow for more people being able to get their homework done, without feeling like they are getting further and further behind. It would also allow those eager to push ahead to progress at a faster rate.

It would also allow me to go beyond the basics and give suggestions as to how to push the envelope and come up with new ideas. Designing in a vacuum isn't nearly as much fun as working on projects together and sometimes just kicking around ideas can stimulate all kinds of new possibilities that you wouldn't have even considered otherwise.

The down side of this proposal is that it would cost more. The current course is at a very modest $20.00. By splitting it into 3 separate courses, to cover the same material may end up costing 3 times as much, if I charged $20 for each section. I'm still thinking about that part of it.

At this point, it seems like the logical thing to do, but I'd appreciate hearing what other people think.
Posted by Sharon at 3:49 PM 7 comments:

These guys and I have been hanging out together for a while now. I don't really like them and they have certainly overstayed their welcome. At the end of May I had mostly finished up the tatting I needed to do. By the beginning of June I had most of the diagrams completed for a small book of tatting patterns. Then about 2 weeks ago I started with a sore throat which rapidly escalated into stomach heaving. Things have settled down into non stop coughing and wheezing. I am so fed up with this.

I have made several attempts to bring all the tatting and pictures into book form, but it just isn't working. My brain just doesn't want to get into gear and this book of summertime tatting projects may end up waiting until Christmas at this rate.