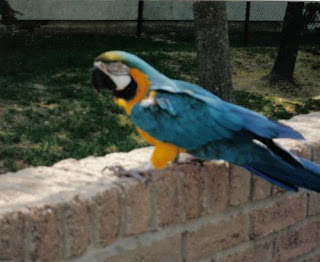 I've had Dusty for almost 25 years. When I got her she was young enough that she had to be bottle fed. She's been a pet and a family member for a very long time and she could potentially live another 75 years. 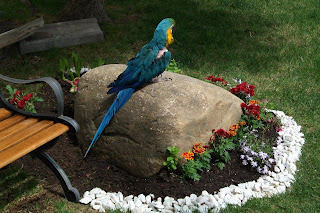 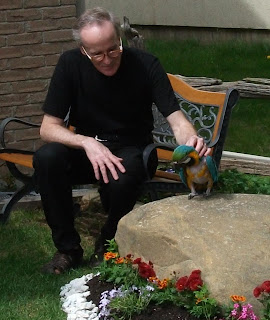 However circumstances change and I know that I'm not giving her the care she ought to have. So, with great sadness the time has come to say good bye. The vet has found a client whose son is interested in having her. He's been over to see her with his Dad and a couple of days later he was here with his girlfriend and Mom. 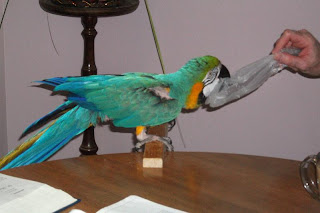 Saturday he's coming over so that my hubby can help him making a free standing play area for the bird. Something that she can climb on and off of from her cage like she does now climbing from her cage to the 6 foot swinging branch we have hung from the basement ceiling. Something that she can climb around, but not climb down from. Her cage is too small, but she isn't locked inside it, except to sleep. He's decided that it's better to make a stand than to buy a really big cage and have her locked up all day. I agree.

I've been on and off weepy for days knowing that she's going. I know it's the right thing to do. I can't give her the time and attention she needs. Hubby can't handle the sound of her screams when she doesn't get the attention. Meniere's can make him fall over if he hears loud noises and her screams ARE loud. 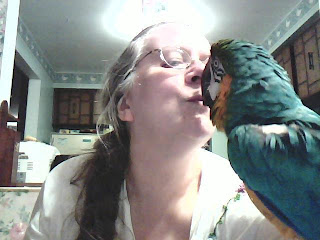 It's the best thing to do, but that doesn't mean I'm happy about this heart breaking change.

I thought I'd tat something with the Lizbeth Summer Fun paired up with a matching solid. It turns out that the only matching solid I had was Light Turquoise. In this sample the colour changes are a little more gradual because the change is only happening on one shuttle, not 2 like the other motif where it looks like a dog's breakfast. The motif isn't lying flat because I took a look at the pattern and then went out to run some errands. I memorized the pattern incorrectly and missed chain 3 on either side of the dimpled rings, so it cups horribly and of course I also miscalculated how much thread I'd need so I had to add more. 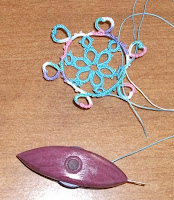 You may have noticed in the picture above my wonderful new Pop-A-Bobbin Shuttle. I love it! This is the first hand made wooden shuttle that I actually LIKE.

Just so you know hubby has all the tools to make these things in the garage. He has a background in quality control and when he builds something in wood, the pieces are so perfectly matched that they hold together without glue. He's a perfectionist and I'm used to things VERY
precisely and perfectly made. He doesn't make a lot these days just because his health won't permit it. So if you think any of my comments are overly critical you'll know why.

Years ago quite a few people on the tatting lists raved about the custom made David Reed Smith shuttles, so when I had some spare cash I ordered one. At the time, between the exchange rate and the shipping costs, it came to around $40 Canadian. I ordered a large shuttle because I figured it would be useful in tatting larger projects to have a shuttle that held a lot of thread. I think I've used this shuttle about 3 times. It's a post style shuttle and I hate it. That's no reflection on the maker, I just don't like post shuttles. As for workmanship, there are some edges that aren't as round as they should be and the wood finish is rather grainy like it needed a little more polishing. That may be due to the nature of the wood I selected. At any rate, the shuttle was a disappointment and after a trial run with a small motif it got stuck in a drawer. It's the top one in this picture.

The next shuttle is a double bobbin Silent Tatter. I needed a double bobbin shuttle and since I was going to be paying shipping costs anyway, I figured I'd order both single and double at the same time. The single is the 3rd one pictured above. The pair of them including overseas shipping from the UK were about $64.00 Canadian They're bobbin shuttles so I expected to like them. Unlike the post shuttle they are usable although just barely so. I have 2 complaints about them. First of all, there are all these little pieces. I often tat while sitting on the couch. When using an Aero shuttle, the bobbin comes out of the shuttle and gets stuck on the back for winding. When I need to put thread on the Silent Tatter I have to juggle 6 little bits which you can see on the left in the picture below. Actually it`s only 5, because the bobbin doesn't fit securely on the piece of dowel supplied, so it's just a useless bit of junk. The bobbin is secured inside the shuttle by a metal sleeve that fits over a tiny screw. In order to undo this screw to put thread on the shuttle you need a screwdriver, or this supplied T. So while you are trying to fill the bobbin there are a whole lot of pieces that can get lost down the side of the couch. Loose any one of those 5 little pieces and the shuttle is useless. They both appear to be reasonably well made although the finish on the single bobbin shuttle is a little grainy looking.

The other complaint that I have, is that unlike the Aero which has the same tension each time I load it, the Silent Tatter needs to have the tension minutely adjusted using the T. I find I load the shuttle adjust it to what I think will work and find that it's either too tight or too loose, but I have already put the T away so that I don't lose it and I end up using an improperly tensioned shuttle which frustrates me. So these shuttles too have been put in a drawer and I only pull out the double bobbin shuttle when I have too, because it is the only double bobbin shuttle I own. I don't know what woods either of these shuttles are because when I ordered them the wood I requested was unavailable and I told them to just send what they had, and they came without labels. 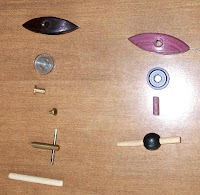 The shuttle on the right in the picture above is the new Pop-A-Bobbin shuttle It's Purple heart and I know what it is, because that's what I ordered and, well, it's purple. This one cost me about $32 including overseas shipping. The Pop-A-Bobbin shuttle as you can see has 4 pieces. The popping tool has a tapered end at one side for popping the little cork out of the shuttle and one side which actually fits the bobbin. Unlike the Silent Tatter, the bobbin on this shuttle can be removed without using the special tool. I can pop the cork with my baby finger so I don't need to use the special tool. That means that while I'm winding the bobbin I only have to really pay attention to the little cork. That's one little piece instead of 3 to put the bobbin back in. Not only that, but once the bobbin is back in I can just start tatting. No fussing trying to screw together little pieces, no problems with tensioning, just delightfully smooth tatting.

I can't use the Silent Tatter without this screwdriver tool and even with it getting perfect tension is a stinker. The Pop-A-Bobbin shuttle really only needs the shuttle because even if my baby finger can't pop the cork, any small blunt object can be used. The workmanship on it is superb also and the finish is perfect, unlike the other 3. This one isn't going in the drawer. I've already tatted 3 motifs with it and if it weren't for the fact that the large 3D snowflake is in process with 2 fully loaded Aeros, it would be more.

The Pop-A-Bobbin shuttle gets 2 thumbs up. I hope "I'm in the garage" has a comfortable stool and a kettle for a hot cup of tea in the garage. I don't think tatters are going to let him come out of it any time soon.
Posted by Sharon at 7:03 AM 10 comments: 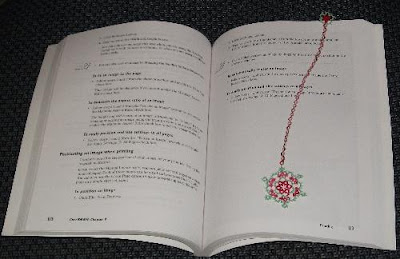 One of the snowflakes from the new book tatted in size 80 thread to be used as a bookmark. All but one has been drawn and almost half of them have been pulled into the publication. If things go the way I want it should be a book by the end of the week. I suppose I ought to think up a name for it, something a little more memorable that "Snowflakes". Any ideas?