The summer that wasn't

I tatted a picture. Actually I had most of the pieces done around Christmas time planning a gift, but my sweetie did a scroll saw piece instead, so I let it sit. Then we needed an impromptu birthday gift so I finished it off. I was trying for something Victorian and used dark red and gold with lighter blue accents, thinking I'd try for a mass of single ring flowers done sort of like babies breath but in navy, it didn't work. Or at least it didn't work the way I wanted it to and I opted for a 4 ring butterfly in navy instead. I mounted it in a shadowbox type frame that suited the 3D flowers, but it didn't look right so I changed the frame, re-mounted the flowers and ended up with this, which I'm still not happy with, but the recipient liked it and that's what matters. 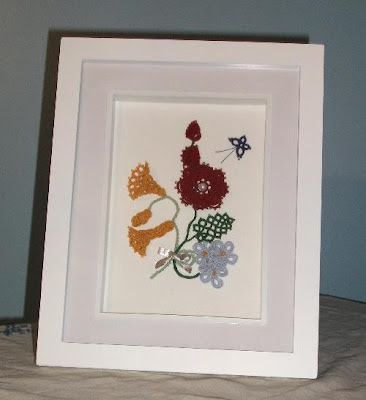 This summer has been the pits. I picked up a summer cold AGAIN for the second year in a row. The cold was long gone, but I still felt totally lethargic. Then I started with the heart palpitations which really put a damper on things. I hate being sick. I hate going to doctors, they never have anything good to say. So I don't go.

Hubby has been working like a regular little beaver, churning out woodwork pieces to beat the band. He made a second work bench, replaced the wheels on the band saw and went to turn a round stool top on the lathe, only to discover that the motor was in the way with the lathe hung on the wall, so he had to make another bench for the lathe, before he could start. Then he made a stool that swivels for working in the garage. A second stool was made for a neighbor that helps him out from time to time. A third stool was made for me. Then he took our park bench apart to re-finish it.

I feel like a lazy sloth in comparison. An now that I have thoroughly depressed myself, I think I'll go lie down and read a book.
Posted by Sharon at 12:27 PM 5 comments: