So far....and rambles on the English language

Well, I'm not sure where I'm going on this, but it's going. 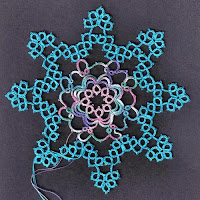 There's a mistake on the first repeat of this latest row where I didn't join 2 rings together because I didn't think I needed to. On the next repeat I joined them and liked the effect better, so I joined those rings on all the subsequent repeats. After it was done I sewed in a thread, ran it through both picots and then sewed it on the first side. Then I repeated on the second side and trimmed off the excess thread so it's all nice and snug now. I want to use my colour choices only once in the doily so that it makes a consistent transition. It may end up looking like crap. Or not. That's what happens with designing. You never know how its going to look until it's finished.

On a totally different subject, we put in a new counter and had to trim off some bits close to the wall, which the instructions said to do with a router. Problem is, the size of the router puts the cutting blade 3 inches out from the wall and the bit that needs trimming is 1 inch from the wall. Grrrr!

They make angle drills so I went looking for an angle router. A standard router looks like this: 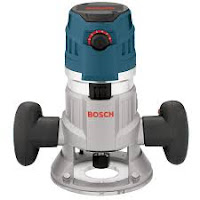 I was looking for something that looked like this: 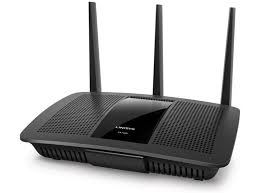 No wonder people who don't speak English have such a hard time learning the language. Two totally different objects, one a tool for cutting wood, the other a device for connecting networks, and yet they are spelled and pronounced exactly the same way.

All languages have rules, but English has exceptions to the rules which change from time to time. Like I before E except after C, except in words like neighbour and weigh.

English really is a crazy language.

To make things even worse, is the poor grammar and poor diction which makes even native English speakers massacre the language. A personal peeve are the hundreds of people who say axed instead of asked. I always want to interject an inquire if the person needed stitches.

O the vagaries of language, makes you think, doesn't it.