I haven't been able to tat for days. Friday we had a minor mishap in the bathroom which resulted in doing some major repairs. It took 2 days to put everything back in order. Did you know paint has an expiration date? I didn't. Last year I pulled out a gallon of white paint to touch up some bits in the bathroom. The paint went on funny with occasional lumps in it, but I didn't care as long as it covered over the repair bits. The problem came later. It stunk. For weeks it stunk. I was embarrassed having people visit it smelled so bad. Not just the bathroom, the. whole. house. I knew that fixing it was going to mean sanding all of the old paint off. I just didn't want to do it.

You're probably wondering why I just didn't get my wonderful hubby to do it. Any other job he would have done it a minute, but paint fumes do him in. Closed in a room with chemical smells will put him down and out for days. So we have an understanding, if it involves smelly stuff, it's my job. He removed everything removable. The last time we did the bathroom that included the toilet. (Dude, in a one bathroom house I need that! We are NOT removing the toilet this time.)

So, after several hours with my hands in various strong chemicals which caused my hands to swell, I sanded, washed and painted every surface in the bathroom including the cabinetry. Two coats. The pale yellow is gone and now everything is pristine white. Some new outlet and light switch covers and everything will be fresh and sparkling.

The tatting, by the way, is a test piece done last week. The project has been restarted 3 times and cut off. As soon as the swelling and muscle ache dies down I'll give it another try.

Here's a picture of the shamrock bookmark I did for the newsletter. It isn't anything really special, but certainly appropriate for anyone you know who's Irish. It could be longer, but I started off thinking 5 repeats would be about right and only loaded that amount of thread onto my shuttle. About the time I thought it could do with being longer, I ran out of thread and just quit. I think it's kind of cute, others may disagree, but they're welcome to just move along and read another blog with something they do like
I've been doing a lot of tatting, but nothing to show yet. I'm working on a beaded design and for the zillionth time missed my lost crochet hook. I bought a #14 (.6mm) hook for doing bead joins. That sucker had such a sharp point it went through anything I stored it in, jeans, purse, sewing kit, you name it. I suspect that poking a hole through whatever I was carrying it in was how I lost it. Trying to find a replacement was a challenge as most stores only carry common sizes. You'll never guess where I found one, it was in the local dollar store, which means I not only found one, it was cheap to boot. (Note to self get back to the store and get another one before they're all gone.
Now that I have another teeny tiny hook I can get back to my beaded design and I don't mind that I need to start all over again because I have a hook now!
Posted by Sharon at 1:41 PM 2 comments: 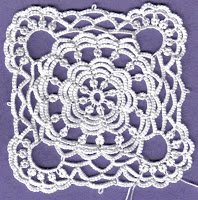 While surfing the other day I saw picture of a corner of a crocheted bit that had a fairly solid circular motif with lacier bits making square corners and I thought of doing something like it in tatting. I got the circle part done and stared on the lacy part, but it didn't work so I un-did an entire row. I liked the rings in the corner and added a row to join them all together. I'm not sure if I want to add another row of chain or just stop here. I made a mistake I'll have to correct, but it's at the beginning of the prvious row. I'll either have to cut off 2 rows or cut out part of the previous row. Or not, I'm not planning on doing anything with it, I was just playing around.
Posted by Sharon at 11:46 AM 1 comment: 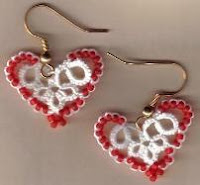 One of the designs I created for the February newsletter were these simple earrings. Hearts are always appropriate and never more so than for Valentines day. I don't play with beads a lot and I've never designed something the used beads on the core thread. So I sat down one day and whipped up this little design. I really like the way that the beads on the core thread forced a nice even outline. As heart designs go, this is about as simple as you can get so it isn't surprising that there are several on the internet that are very similar.
Posted by Sharon at 12:19 PM No comments: 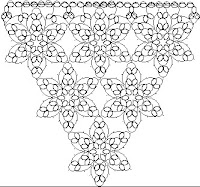 I woke up this morning thinking that the design I created for the V-neck would make a nice triangular shawl. Not attached to fabric as I had been thinking, but all by itself. I had to do a quick drawing to see how it would look. It might need a little something in between motives or maybe small rings thrown off the tops of the chains at that point so that four of them would join in the middle. It might make for a more solid fabric. Hmmm. Do I want to take on a big project. I used size 30 and got a motif that's 3 inches across. I figure about 50 inches across the long side or roughly 18 motives. That's enough calculating. It'd be like making a bedspread and I don't have enough spare time to launch into anything that big. It would be pretty though.
Posted by Sharon at 8:49 AM No comments:

Yippee the Newsletter's out!

The February newsletter is finally out. I know it's March, but I almost made it for February, in spite of spending part of each day this last month soaking up water from soggy carpets and consequently doing a ton of laundry. I 'm getting closer to my target date with each issue so I'm a happy camper.
Remember that mess I showed you earlier, where my left side didn't match my right side and I had to cut it out several times to get it right? 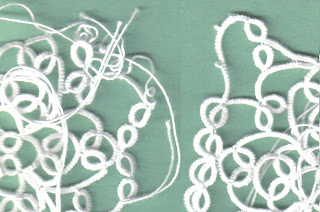 Take a look at it now. 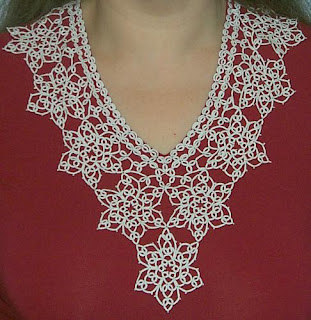 I not only designed a motif for the challenge, I tatted 9 of them, added a border and attached it to a T-shirt. Here's a shirt with some WOW factor.
Here's a close up of the motif. I knew it was going to be added to a garment and I didn't want to spend ages blocking it every time it was washed, so there are very few free picots. In fact there are just a few in strategic places so that the motives can be tacked down so they stay in place during laundering.
Designing the motif was the easy part, matching the border to it filling in the gaps between the points of the motives and making a wide enough straight edge to it that it covers up the band around the neck V was a bit more of a challenge. Which is why I had a lot of messes before I had something useful. 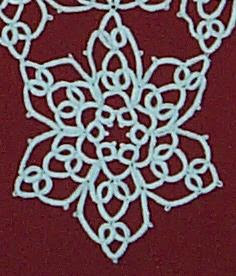 I am pleased with the way it turned out, especially since the border fits around the V-neck but it is actually a 90 degree turn so that it could be added to the edge of a hanky, used as a border on a shawl, mat, tablecloth or whatever you have that needs a square corner. I used a Coats thread size 30 for this one but you could use any size thread you want and just add or subtract motives to lengthen or shorten the border to fit the fabric.
Posted by Sharon at 11:32 AM 2 comments: