Earlier I posted this snowflake and several people have asked for the pattern. 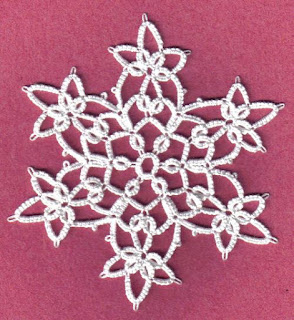 I did the pattern for it, but I whipped it out in a bit of a hurry so it isn't really up to snuff.  The central ring is 3-3-3-3 with a split ring of 5-5 into the first row. All of the other rings are 5-5 and the chains are 5-5 except for the chain at the outer point which is 7-7. The four rings on row 3 are all joined into the picot in the middle of the chain of row 2. Picots are usually shown as a single short line but in the interest of clarity I used a wee circle in place of the picot line. 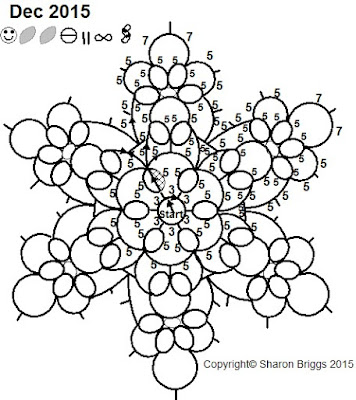 Please let me know if it doesn't make sense or if you find a mistake.
Posted by Sharon at 10:42 PM 7 comments:

Hot off the shuttles

Here it is, the newest flake. It's not even blocked because the thread broke as I was tying the knot. I always knot my thread ends and then sew them in. This time one of the threads broke right at the knot as I was pulling it tight. So I cut off the other end also close to the knot, but I'm not sure it will hold if I aggressively block it. I think it's cute, but kind of small. On the other hand it's quite dense, so it will hold it's shape. 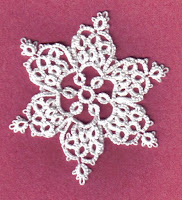 I started another snowflake design, but I wasn't sure where I wanted to go with it. I had an idea that was percolating but when I put it into lace the first row looked skimpy and disjointed. I worked to join the bits together on the next row but had more floppy bits that bugged me. Another row held it all together but I ended up with a round design that seemed to want to grow into a six pointed motif that I liked less and less the more I added. So I quit. 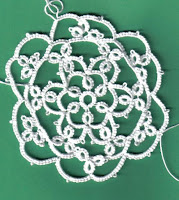 I started again, determined not to have any more floppy unconnected bits and ended up with something like an earlier design and smaller that I wanted. So I scrapped it too. 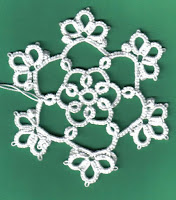 The next design is on the shuttles and so far I'm liking it, although it's coming out at a small 2.75 inches compared to the earlier one posted which is 3.5 inches across. I can add a row or two to make it bigger, but I'm liking how it looks as is.

I was asked for the pattern of the previous design and it's in the works. I'll post it when it's done.
Posted by Sharon at 11:53 AM 1 comment:

This one looks better. It's not a stinker to tat either. Just a nice smooth flow from one row to the next without any crazy "tat the ring before the split chain" insanity of the last snowflake. 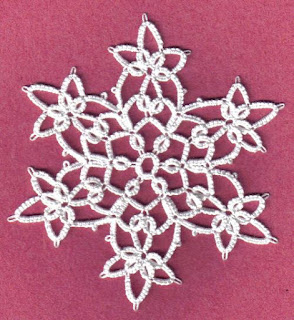 We didn't get to watch a movie last night so it looks like I'll be designing another one tonight.
Posted by Sharon at 4:11 PM 9 comments:

A stinker to tat

That's what this snowflake is. I like the overall appearance. It looks pretty, but what a pain to tat. I did it in 2 sections, which I guess I could maybe have done in one, but not without even more fussing. The picture pretty much says it all. This is the second one I've done this season without writing out the pattern so it's definitely one of a kind. Now that I look at it blocked out, there's something wonky about it, but I can't tell what it is and it doesn't matter because it's done and I'm on to the next. 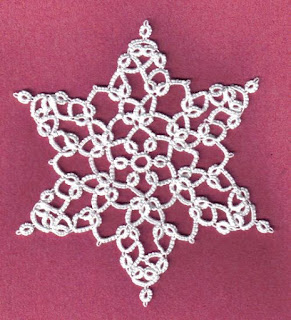 Hubby wants to kick back and watch a movie so it looks like I'll have another one on the shuttles tonight. Hopefully the next one will look good  without the aggravation.

It IS wonky. No wonder it drove me nuts.
Posted by Sharon at 5:21 PM 6 comments:

The next row tightened up the doily so that it didn't ruffle as much, but I can't see where to do from here. I know I had in mind to do something with a row of motifs on the outside or combined rows to give that kind of effect but it doesn't want to flow and I'm tired of fighting with it.

Part of the problem is that I'm running out of size 20 white and a bunch more rows will take a bunch more thread. I think at this point I'd rather use the white to make some snowflakes so I called it done and cut the thread.

After blocking it into submission this is what I ended up with, a doily only 9 inches across but just a smidgen too big to fit on the scanner. 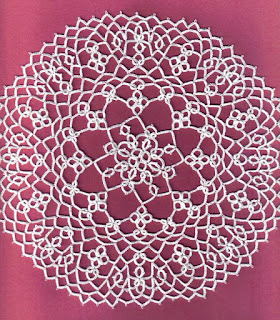 It's not bad, but it isn't great either. I have no use for it so I suppose it might end up as a Christmas gift.
Posted by Sharon at 2:36 PM 5 comments:

You'd never know it to look at this blog though. My dearest has been in better health this summer and we did a lot of travelling around. Even when we're not doing much at all, we've spent more time wandering around shopping, mostly window shopping, just to get out and be doing something. Meniere's has kept him mostly house bound and even when he's up to moving around a lot some problems with his ankle means we don't do a lot of walking. Except this year he has been exercising and doing eye exercises that have helped enormously. Consequently there hasn't been as much sit down time as usual.

Of course keeping my Kobo loaded with library books has taken my attention as well. There's just something about having an endless supply of reading material at my finger tips that has brought out the reading monster in me. Yes I know most of it's drivel, but I still manage to go through nearly a book a day.

Usually at this time of year I get into a mad flurry of making snowflakes to send out with our Christmas cards, but as my siblings get older they have discontinued with the massive Christmas decorating. A lot of them have been making noises about decorating a tree being too much trouble so what's the point of making ornaments that won't be used. One brother hangs his on their glass doors and one sister has hers hung on the dining room mirror year round, so for them it's worth while. That cuts down by frantic snow making from a dozen to two.

I sat down and designed a snowflake for my sister last week. It didn't come out as well as I would like, but since she informed me that she is now keeping the snowflakes on her dining room table under glass it'll be okay. 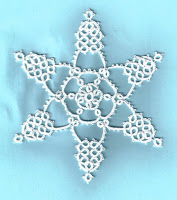 I don't like the limp chains at the base of the points as they don't hold the shape properly. A large outer ring in the middle of the chain on the row before would have helped. Or small outer rings on the final row joining point to point would also give it the structure it needs. By the time I knew that, it was too late. I was already on the last round and running out of time. My sweetie was anxious to get the cards sent out so off it went.

I've been sort of working through a doily and I'm not too pleased with how it's going. It was all right up until the 7th or 8th row. The 10th row ruffled and although the 11th is pulling the ruffles in, I don't think it's enough. It may be all right with aggressive blocking, but I don't want it to need that kind of attention. The 12th row which should be just chains may fix it, but then again it may not. 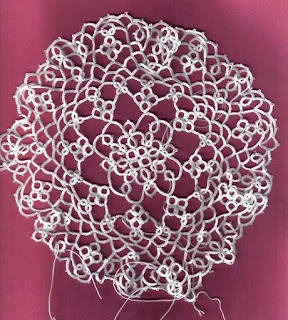 I think part of the problem is that I've been doing it in fits and starts so that there's no coherent design going on. I hate cutting off rows and starting again. I have only so many hours to work on it and I resent hours being wasted. I'd rather be clever and find ways to make it work than cut it off and have to re-tat several rows. It's OK on a snowflake, but a doily has too much time invested. Besides, I need to be making snowflakes. I may just pitch it and start with a new idea.
Posted by Sharon at 3:12 PM 4 comments: