Where do we go from Snowflakes?

When you talk about designing there are a lot of aspects to examine. We've been looking at how you might gain some experience by modifying an existing design.

One of the other aspects of designing is just coming up with ideas. Where does the inspiration come from? It comes from lots of things. Previously we looked at snowflake 8 and how it grew into a doily. In this instance, my inspiration came from a crocheted hexagon. There are lots of things that might catch your attention and provoke you into thinking about ways that you might turn it into tatting. Sometimes you go looking for inspiration, and sometimes it comes looking for you.

A few years ago I saw a commercial for a fashion show and the black choker worn by one of the models intrigued me. I only saw it briefly as the model walked down the runway and off screen. It was a round black medallion on a black band and it looked somewhat like a tattoo. The medallion was quite dense in the centre with some filigree toward the edge. As soon as I saw it I thought I could do it in tatting.

The first step was to create the medallion and I had to do a little planning before I started. I selected snowflake 3 as a base since it was the one most like the choker. A snowflake has 6 sides and you can turn it one of 2 ways.
You can have a single point on either side and 2 points top and bottom like the example on the left. If you attach the strap part of the choker this way it has to be skinny because you only have one side to join on to.

Or you can have 2 points on either side and one point top and bottom like this picture. That allows you to use a wider neck band, but then the top and bottom of the medallion only have a single point so the shape looks less round. Either way it wasn't quite what I was looking for.

Another option is to work with an 8 sided shape like this one shown here. 8 sides or pattern repeats allowed for 2 on top and bottom and 2 on each side. 8 repeats also made the snowflake that much larger which was another plus.


When you start with a central ring, you need to have some idea of where you're going with the design before you start. The central ring needs to be big enough for what you want to arrange around it and it needs to have enough picots on it. If you're doing a six sided snowflake you need 6 joining picots, but an 8 sided medallion needs 8 picots. Thinking about what you want to accomplish helps you to make some essential decisions before you begin.

Note: Picots are really the spaces between stitches. So if there isn't a picot there, you can wiggle a hook in between the stitches to do a join. But, if your other joining picots are longer you may see a difference in the final piece. When it's in the centre of a piece it is more likely to be seen than if this action is taken on the side of a project. I tend to keep all of my picots a medium size. As a designer, this is a trick I often find useful. Tatting is a slow meditative process and I may change my mind about how I want to work a project several times while in the process. If I start out planning one thing but see that a slight variation will work better I'll change my plans and start wiggling my hook between stitches.

When you are trying to figure out how many picots to use and where to put them, remember odd numbers work best. Look at the pictures above. If you're going to join onto this first round of the snowflake and make another row where are you going to join to the chains? Typically, the next rowwouldd join to either the base of the chains on the previous row or to the mid point of the chain. If there was only one picot on the chain it would be in the middle of the chain.

Let's say you wanted to double the number of pattern repeats on the next row of a doily starting with a first row like snowflake 3. That would mean you'd have to do 2 pattern repeats for each chain. Where would you place the picots? The easiest way is to use 3 equally spaced picots on each chain and then do the join on the next row to the first and third picot, leaving the middle picot free. You could also do 5 equally spaced picots and then do the joins on the second and fourth picot leaving the 1st, 3rd and 5th picot free. Using more picots gives you more options on subsequent rows. 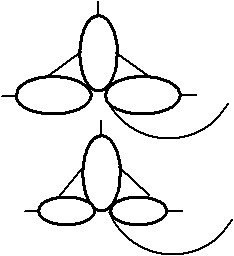 Snowflake 3 uses a typical cloverleaf where all 3 rings of the cloverleaf are the same size. Just like choosing to use an 8 sided motif rather than a 6 sided one, the size of the rings, the size and placement of the picots and the number of picots affects the overall look of a design. See the 2 cloverleafs at the left? It's only one small change but it has an impact on the whole design I chose to use a cloverleaf with smaller side rings, and I also used smaller outer rings for the base motif, since they would be more like the filigree edge on the model's choker.

I needed a bigger medallion than just the snowflake shape and I added a second row of inward facing cloverleaves attached to the tip of the outward facing rings. I had to use twice as many cloverleaves to stretch around the outside of the snowflake. Each alternate cloverleaf wasn't attached to the snowflake, which allowed the outer row to flex easily, but unattached parts of a design are able to twist and turn so I usually try to avoid them. That's another little consideration when you are creating your own lace. Most of the time you'll want all of the rings attached to something or they won't stay in place. 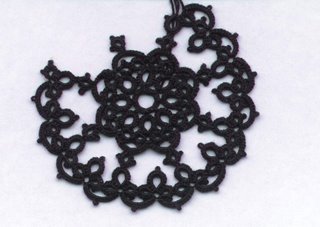 This was the design. It was almost 3 inches across and it was too big to fit nicely on the neck, but it told me what I needed to know about the size. This partial bit hasn't been blocked and it cups severely. The picture may look flat, but the real thing isn't. So I learned that it was too big and that the stitch count I used in the chains needed to be increased.

Sometimes even with a good plan, you still have to make a couple of tries.
Posted by Sharon at 9:11 PM

Are you going to put all this great stuff into a book, Sharon?

I hate when I'm designing something and have to try more than 2 times! ANd about cuping, how I hate that!

But even if the motif is big it looks so nice, like for a big snowflake or the beginning of a doily.

To answer Marilees's question, I hadn't thought of it. Why, do you think there's a market for it? I have been considering one of the on-line courses. Where you pay a fee and once a month get the next installment in how-to, with the opportunity to ask questions and express concerns.

And yes Wally I hate cupping, or the reverse, ruffling. The design is pretty, but stay tuned for the final results. There's more to come.