Where does a design start from? I have already told you that my inspiration for the pink doily came from a crocheted hexagon. There are lots of things that might interest you enough that you would want to re-create them in tatting. Sometimes it's just a matter of thinking about it. Sometimes you go looking for inspiration, and sometimes it comes looking for you.

Have you figured out the second row of the doily?. The snowflake starts with a ring in the centre and ends with the last chain joining back to the starting ring. That's OK for a snowflake, but when you are working on a doily you want to be able to continue on to the next row. In fact, if you have an idea of how the design is going to develop, as I did with this pattern, you want to think ahead not only for the next row, but several rows so that you can climb from one row to the next in the most efficient manner.

Sometimes designs just happen, especially smaller designs. You find yourself just tatting away and you try something a little different. Maybe the change is just adding more picots, or making a cloverleaf with small outer rings instead of all the same size or changing the connection point on a ring. Sometimes you like the results and sometimes you don't.

Sometimes, like with this design you sketch something out and work from your sketch. When you are designing something for your own use, it doesn't matter where you start or end, but if you are going to design your own pattern, you really ought to write it down. That way you can repeat the pattern again later. You may even publish your pattern so you want to think in terms of explaining what you are doing to someone else.

The central snowflake when used in the doily begins with the ring at the top of the chain. This allows the row to end back at the top of the chain where the snowflake joins into the transition row. Sometimes the best way to solve a maze puzzle is not by starting at the beginning, but by starting at the end and working backwards. Since this design was already drawn and I was just following the diagram, I just had to find a pathway that let me work from row to row.

That means looking at where the current row is going to end and then seeing what is the best way to climb into the next row. There are often several ways of climbing from one row to the next in a doily. Some pathways can require a single split ring, while others may require a split chain with a ring at the end working backwards into another split ring and it can get very complicated. Sometimes the required steps to move from row to row just aren't worth it. Especially on the outer rounds of a doily where you may find you have to stop and re-fill your shuttle anyway. Sometimes the best method of climbing out it just cut and tie. Don't be afraid to suggest cut and tie in such a case. Your the designer, you get to make the rules.

I already mentioned that the rings in the snowflake had a total of 18 stitches and the rings on the succeeding rows had to be either 16 or 20 stitches. If you figured out that they were 20 stitches, you were right.

Here's the diagram with row 2. Notice that some of the rings are shaded or partly shaded. The shading denotes the rings or parts of rings that are done with the second shuttle. This is a method I use to make my patterns easier to understand. You'll also notice some arrows along the chains or going through the centre of a split ring. They tell you the direction of the work.
That first block of 7 rings is where row 2 begins and ends. The first part of it is marked A,B,C,D then the design continues on to the next pattern repeat. At the end of the row it is marked AA, BB, CC. Then it climbs into row 3, which begins the base of the diamonds. 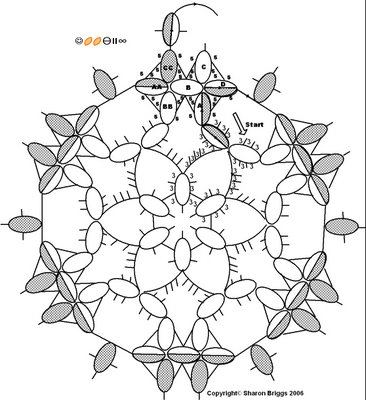 Whether you write your patterns out using long or short notation, or draw a visual pattern, try to think not only of what you want to say, but think about how someone else might interpret your instructions. Make the assumption the the person working from your pattern is a new tatter who doesn't have any experience. Some things that you wouldn't have to tell an experienced tatter, you do have to tell a beginner. Always write your patterns so that a beginner can follow them. If a beginner can work from it, then anyone can.
Posted by Sharon at 10:32 PM

"In fact, if you have an idea of how the design is going to develop, as I did with this pattern, you want to think ahead not only for the next row, but several rows so that you can climb from one row to the next in the most efficient manner."

This is a great advice!!! I still hace some problems with this when I'm designing. Sometimes what I do is just cut and tie and after is finished then I study it to see a flowing path using Split R & CH's.

Also when reading a pattern from a book that uses the traditional or old way of tatting, I find myself studying it to see if I can pass from a row to another without cuting.

I like the Snowflake doily and it's so good to know how you came with the design.

I really like the idea of writting the pattern in terms for a begginer as some patterns leave a lot to be desired.