Sometimes there are designs that are created, just to see if you can. They're often one of a kind designs as in Carol Amich's 3D tatting, like her haunted house. If you haven't seen her 3D tatting, take the time to go wander through the back posts on her blog that's linked above. Some of these designs get shared, but a lot of the time they exist just because the tatter wanted to play around and see if an idea, percolating in a fertile mind, might just be possible. In those instances, it isn't about making a pattern others can follow, it's just about creating.

When a designer is creating specifically so that others can tat, it isn't about, yes you can create it, it's more about can you make something other people will enjoy tatting. Have you ever worked on a design where you had to refer back to the pattern after every ring or chain to see what to tat next? If the design doesn't flow in a logical progression it makes it, not really harder to tat, just not as enjoyable. Consequently, when I design now, I settle as much as possible on a single ring size and a standard repeat of stitches and picots for both the rings and the chains. That makes it easier for the tatter to get into a rhythm, and enjoy the process rather than struggle with each ring and chain. Making it simpler, doesn't necessarily make a better design, but it does make for a better tatting experience.

This heart is simpler than the last design. It's a basic 5 lobe heart with a couple more rows around the perimeter. 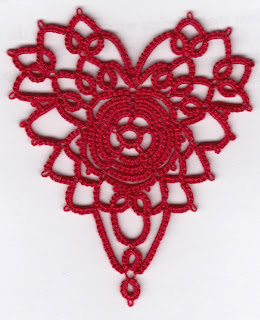 I could have added another row on the outside to smooth out the curves but I decided it looked good as is. The finished size is 2.5 by 3 inches in size 20 thread. The pattern follows: 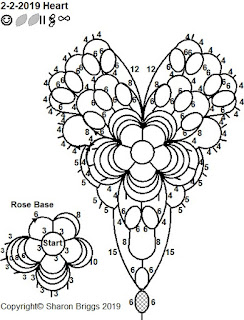 There's just one split chain on the penultimate row and you can tat the pattern without the split chain by finishing the row normally, cutting the thread and beginning the next row. That will make for hiding the ends on both of the last 2 rows instead of just the final row. See? Simpler.

Interesting article, I like your explanation of the difference between creating for effect and designing for others to follow. Thanks for the link, I’m going to follow it now.

Yes, I agree! Sometimes one just has to let one's creativity flow.
Love the link you shared. Her work is amazing in all it's detail!
I've completed the previous heart (with some process pics), but am off to make another with Jane's suggestion of colours ;-P