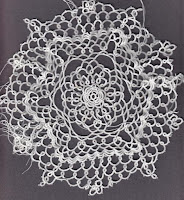 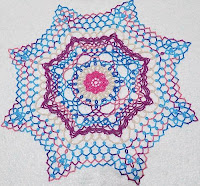 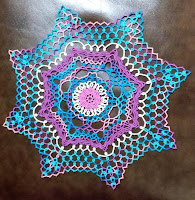 (Grumble. grumble, I'm finished, now what am I supposed to do with myself?)
Posted by Sharon at 7:37 PM

Hi Sharon, Have you tried http://www.sewfancy.com for thread? She is located in Guelph.

I have, and liked dealing with them, but they don't carry a full spectrum of the Lizbeth threads. They can order them for you, but it adds to the time delay.

Fabulous design,
I can understand how you feel about buying thread in the US, I can’t buy from the US the postage out weighs the cost of any items to tge UK

The colours highlight how the pattern radiates outward !!!
I have the same problem with shipping charges and currency conversion taking the cost to unreasonable highs!

Waiting to see your next doily :-)