Design Leaks and Pretty but not Pointy Designs

You may have noticed that I haven't blogged much recently. That's not exactly true because I have been keeping up with daily posts on the 25 Motif Challenge blog. If they aren't done daily, it becomes almost impossible to keep up, so I've been putting other things on hold just to make sure that the challenge blog gets done. There is a team of people, but with regular things like work, families and other normal life stuff getting in the way we don't always have the time for it. Unfortunately, when several people aren't able to keep up on their designated day, it suddenly becomes an all day project. When that happened several times in a row, I just decided that I couldn't handle another all day update, so I started doing them daily.

So the challenge blog is on track and the Design-Tat course is up and running for a third term so I've been a very busy tatter, only, I'm not doing much actual tatting.

Remember how I said I was trying for 10 designs in 2 days? Want to know how many I got done? Come on, ask me. Never mind I'll tell you any way. I got 2 done. Two measly designs and one of them can't even be used because it doesn't have points, it has rounded lobes like a flower. Pretty, but not pointy.

Then there was last week which was more or less a write off on account of a cold. You know something? It really helps when you can breathe. Between having a tissue covering my nose to catch the drips when I was upright and having my nose plugged completely when I wasn't, breathing became an interesting exercise in futility. I knew I was done for when I sat for an entire evening with a pair of wound shuttles in my hands and didn't tat a stitch.

When I finally managed to get the design off the shuttles it didn't lay as flat as it ought to and I can't use it anyway. I realized as I was doing another update for the 25 Motif Challenge that the snowflake not only has rounded points, it's a whole lot like the Iris Niebach design Dale Marie was working on. 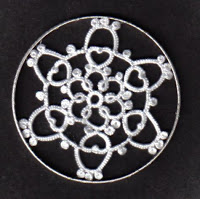 I can't look at other people's tatting when I'm designing or elements of those other pieces just leak into my tatting. See the similarities? I feel like I've plagiarized a design although that wasn't what I was doing, I was thinking about mignonette and decided it had too little structure of a snowflake, so I just used the Josephine knots and incorporated them with some dimpled rings, because, like it was February, and Valentines, and all that. So here's the 3rd of the 10 I was supposed to do, but it too, is being rejected. So of 10 planned designs I have exactly 1 that's usable.

If you hear screaming coming from the north, it's just me getting frustrated.
Posted by Sharon at 5:36 PM

For what it's worth (late, having just found this blog) I would say the two patters are sufficiently different that it would not be copying. There are only so many rings, dimpled rings, chains, blocks, and picots in tatting. This is just two different round motifs that both use dimpled rings and josephine knots. :)