....downhill. I began this one and realized at this point that if I continued it would end up being doily size and not just a snowflake so I cut it off and started again. 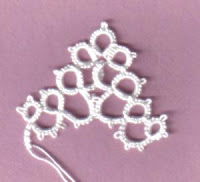 I tried something along the same lines adjusting for the mistakes in the previous version. I wanted a centre of cluny leaves which I thought would look good but it turned out to be just a mess. 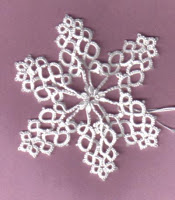 I've had 3 designs in a roll that have been total duds. It's enough to make me want to quit designing. I expect it's just that I've been pushing too hard instead of letting it flow. I think I need to change my perspective and maybe change the kinds of things I'm working on.
Posted by Sharon at 8:18 PM

This is really beautiful. Very elegant.

I love doily-sized snowflakes, but I understand what you're trying to accomplish. I'm glad that you're inspired to design. I draw a total blank when I make any attempt at doing my own thing.

Hmmm, once again, not quite what you were trying to do, but lovely nontheless. My messes are never this pretty. ;-)

It may look pretty in the picture, but the clunys overlap into a jumble in the middle and each of the points curl instead of laying flat. I want the effect of the cluny leaves fitting together like diamond shapes in the middle.It might be salvageable if I started with a large central ring but that would lose the effect I was looking for and besides, the only way to find out is to tat it over again. That means re-tatting the whole thing including the 12 cluny leaves. Not exactly a quick fix.

Well, I can't call that any kind of mess! I think it's lovely, although I understand what you're trying for. Just sit back with a cuppa & relax. It'll work out if you persist. Sometimes taking a break makes it happen.

Maybe it's time to try something other than a snowflake for a bit. Don't get discouraged. We all love your designs!