I used nail clippers to snip the shuttles off the last snowflake while I was sitting in the waiting room and knowing that I was going to be waiting a little longer I started right in on a new design, and just started making a ring without thinking or planning much. I hid the thread ends as I worked the first ring and chain and just carried on.

After I did the first ring neatly hiding ends, I realized I had only put 3 picots on it so I thought I'd do the next snowflake vertical. What I mean by that, is working the design from centre to outer rim and back to centre, for each of the 6 sides of the snowflake. I threw in a cloverleaf to broaden out the section of the snowflake and then had no inspiration of where to go from there so I lamely attached the chain to the side of the ring and slapped on a large ring at the point. Coming down the second side of the point, the chain had nothing to join into yet and the join was on the wrong side of the chain.
You can do it by slipping a spacer in at the appropriate point so that you can join into it later but it's what I call an "ugly" design. Not ugly in final appearance, but ugly in the way it needs to be worked. 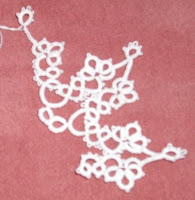 After a couple of repeats I ran out of thread and couldn't whip up enough enthusiasm for the design to add in the thread to finish it. It's disgusting and I'm not going to finish it.
Posted by Sharon at 12:45 PM

Disgusting, really? I rather like it. Of course, I don't mind using spacers either. :)

Urm...I think you needed some sleep or were hungry!?! Or something because that is not disgusting...and I should know because have great taste! LOL!

How can you say it is disgusting???? I think it looks good...please do it again and carry on with it
Joy

Hmmm, while I understand your working definition of "UGLY," I don't think your end product is rubbish bin material.

It demonstrates the lateral design concept so well that my eyes opened up and I finally can comprehend how to do it. (Sounds silly, but true.)

You know, I think you underestimate your design power.
If at the end of my life I am able to say I have probably created 30 designs (compared to your several hundreds!) -- be they less than elegant or the epitome of perfection -- I will consider my design career a raging success!

You are without a doubt a great and masterful designer.

It is refreshing to see a 'master' craftsman have a bad moment...it makes it so much easier to bare when I make a design mistake - and I don't have a 100th of you're technique or talent. I love to look at your works...they are such an inspiration!