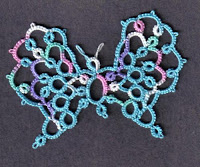 I may be useful for providing historical and practical information about tatting, but they don't really want to talk to me, they want to talk to kids. Suddenly, I'm irrelevant and I resent that. Or is it, I represent that?
Posted by Sharon at 1:36 PM

i think i resemble that too...

as do I
but, without us, the younger generation would have a harder time learning how to do things.

Hi, Sharon,
Picking up on what Ladytats said, and going further, I think the world is not ours anymore - our generation has had our shot at making changes in the world (many of them not too nice!) and now we get to peek at the way things are changing as the young turks grab the reins. We get to visit the future, not live it. (Khalil Gibran said this first and better!)

Folks through the ages have always found ‘the old ones’ when they focussed and were relentlessly determined and serious about seeking council. I think it is still like that.

But the masses will always read,eat and live the mediocre, being content with a few bytes of info. I do believe nothing has changed in human behaviour that way.

So, I do not resent the young journalist taking more interest in the younger set. I celebrate the fact that tatting will be presented to them in any form! I hope that article gets press time!
Fox - my humble opinion.

I feel your pain as I too represent tatters "of a certain age."

Try not to worry about it too much. We are as young as we feel, not the age label that gets slapped on us.

Your butterfly is so very pretty!

I say, stand proud in your "tatting tween" years. So many lacers don't find their way to tatting until their retirement years. So you are well ahead of game!

Well as a tatter who is in that "under 30" range, I just want to say that I look up to my more experienced friends.
I don't see you as irrelevant and I appreciate you and all my other older friends!

I like your butterfly too! Very pretty! I love the color!

I am afraid I fall into the old ladies group although I do have a grand daughter who is 11 learning to tat. Without us the older generation the younger generation would not be able to learn an old craft.

Very Nice Butterfly. Is it one of your own designs?

Well it is a fact of life that we grow older and are no longer in the centre of things. I don't mind that really. But it always gives me much pleasure when young people are curious about tatting and I love to show it to them. I think whatever attention to tatting is good.

If under-30s are learning tatting, then it is definitely not a dying craft, so it's not a bad idea to focus on them. It doesn't make the rest of us irrelevant, it's our duty to pass crafts on to the next generation.

You're not irrelevant. Though, I would assume any of you over 30 would have been there, done that. Meaning, many of you have raised families, gone to school, began careers while possibly tatting or learning to tat.

As an aside, Fox was asked too and her post mentioned that the journalist was looking for young women (she also used young people too). I'm 29, but not a women so I'm not sure if I'd even fit the type of person she's looking for.

I do realize that as a guy I'm an anomaly in the tatting community, but still.

Jeff, contact the journalist and tell her to abandon her stereotypes!

Well, I guess it wasn't the journalist's fault. I guess Fox had mentioned that there were guy tatters too, which she thought was cool. Fox accidentally put "young women" in her post. So, I retract part of my previous comment.

Thanks for accepting my apology for my very own blunder, Jeff! Must be the fault of my ‘old’ brain!
Fox : ))

Oh Sharon, I know the feeling. I think you speak for a lot of us. It can be irksome to not be an attention getter - either because you don't talk as much, buy as much, or glitter as much.
We have our place though. We are the foundation and the steadiness that allows the others to shine--for now.
I am grateful for your blog and your patterns and input. Glad the wrist is better.

I talked to the journalist this morning. Her interest in the sub-30 tatter, a "next generation" tatter, seemed to be more about why we chose to tat over other things. I'm looking forward to the article when it comes out.