I am always intrigued by the yearly furor over tatting things to be judges in the annual fair. I have never visited our local fair. I might enjoy it, but my beloved other half wouldn't and to drive more than half an hour and pay to get into an event that he doesn't want to see just seems silly. However, I thought that this year I would check it out just so that I could enter some tatting and keep the subject in public view. I eagerly anticipated dozens of ways to enter tatting into the fair submissions. That was, until I saw the entire listing under "Homecraft". The whole list is 12 items long including 2 items specifically listed under woodworking, a picture of which is included here for your amusement. There are 2 PAGES of classes for quilted items. I guess that's what happens when there's a quilt guild in town. 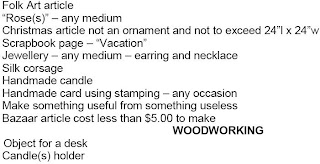 I don't have time to design and tat a realistic 3D rose which is what I would have done if I had known that roses were going to be this year's theme. The tatting that I have done this year, a lot of which were snowflakes, don't fit into any of the categories. So I think I'm just going to give it a pass especially since there is a $10.00 registration fee and the "prize" in any of these categories is the fantastic sum of $4.00 for a first prize. (The prizes in the quilt category start at $8.00.)Kind of makes you feel like a poor cousin, doesn't it?

If these categories were posted earlier it might be possible to do something inventive for each category, but as I only have a couple of weeks, I think I'll forget it.
Posted by Sharon at 7:32 PM

Hmpf. That's a pretty paltry set of categories and pretty pricey entrance fee. I wonder how it compares with others around the country. Maybe it would be interesting to see.

Gosh what a hefty entrance fee, as I have siad on another blog we dont have these type of fairs in the UK and like this one tatting would not be on the list as it is not widely made here. We have village fairs, but not on the scale of yours.
I think I would be passing on the castegories too.
Margaret

We have a local county fair and a state fair. On the county level it seems as though the same people win year after year. Maybe they are the only ones that enter? The prize money is nominal but you do get your name in the paper. Remember when winning at ribbon at the fair was a big deal? It still would be to me, but there seems to be less interest in it all the time. The booklet with the entry catagories comes out only a few weeks before the fair, so I guess you have to plan a year in advance.
Deb

Wow, that's a pretty pathetic list to choose from. Our county fair has tatting listed under the crochet heading as a class: tatting: large or tatting: small, so you can enter two items. The state fair has it under "Needlework Arts" and only Tatting, so you can only enter one piece. The state fair also states that if there are fewer than four entries in a class for two years running they will eliminate the class. But they do have a class for "Other than classified" which is a possibility. My sister is having trouble finding classes as well. She does hand embroidery(not cross-stitch). They seem to have a lot of classes with Hardanger, needlepoint or cross-stitch and machine embroidery.

Wow $10 to register?! That's alot, but about the same as our state fair. Our county is only $1 per item but they do limit it to 2 per category. Tatting is a subsection now under miscellaneous. I put so much tatting in one year that I want to believe it caused others to join and maybe next year it will have it's own section.