A gift for you

This year I decided not to send snowflakes in our Christmas cards and I tatted ice skate ornaments instead. Eight pairs of teeny tiny skates were made. One thing I've noticed with tatting is that the details can often take as much time as tatting the whole project. Tatting skates takes a whole lot more time than a snowflake, mostly because we have 2 feet and need 2 skates. I thought I'd make these skates wearable instead of as ornaments, so I added a tiny pair of holly leaves to hide the bar fastener behind them. An extra pair of tatted holly leaves with red beads for berries and an itsy bitsy bell. I would have rather used 2 bells so that they jingled more and I could have put them on the skates, but I didn't have enough bells and couldn't find a store that had more of them that tiny. (I'll bet that after Christmas I see them everywhere I go.)

I expect these to be worn, maybe on a coat and they may get wet, so I thought the usual paperclips that form the blade of the skates might rust. When I found these red plastic coated paperclips, I thought they were perfect. Making tiny blades for skates, lacing up tiny little boots, tatting minuscule holly leaves and sewing on the bar fastener took almost as much time as tatting the skates, but finally they were done. TA DA! Tatted ice skates. 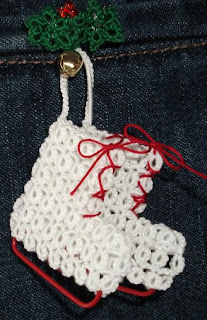 I thought you might like to tat a pair of your own, so here is the pattern. The whole thing is mostly rings of 4-4 and chains of 2 except for the chains at the toe and heel on the first row, and at the toe on the second row; which are 3.
Corrected pattern 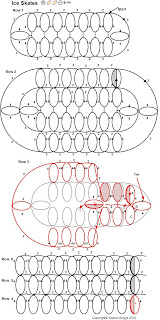 An experienced tatter probably doesn't need anything more than the diagram, but some people might find a little more instructions helpful especially with the shaping of a 3D object. The first 3 rings at the toe all join into the picot of the first ring and when you are finishing and inserting the paperclip blade, that's where the paperclip is inserted, so make sure the picot isn't too small I used all same size picots. The three rings at the heel are made the same way, so make sure that picot isn't tiny either. Then when you make the second side of the sole of the skate the rings are joined to the matching ring on the first side. End with a shuttle join, and split ring to climb into the second row.

On the second row join each ring into the base of the ring on the first row. End with a shuttle join and split ring to climb into the third row.

The third row shapes the top of the foot. After the split ring, (no chain) tat another ring joining it to the base of the ring at the tip of the toe, then tat a third ring joining it to the base of the next ring. Think of it like a clover leaf. Then tat a chain of 2 and one ring joined to the base of the ring on one side of the foot and switch shuttles to tat the ring on the other side of the foot. Chain 2 and tat the next pair of rings, one on the left and one on the right. Then chain 2 and continue tatting ring and chain around the top of the shoe finishing with chain 2 shuttle joined between the last pair of left and right rings.

Row 4 begins the boot with a split ring. This split ring marked with an asterisk is the new front of the boot. Chain 2 and tat the next ring joining it to the base of the ring along the side of the boot. continue working around the boot ending with chain 2 shuttle joined into the top of the front ring. You should have 10 rings and 10 chains.

Row 5 and 6 begin with a split ring and are just a repeat of rings joined to the base of the ring on the previous row and chains. Make sure that you have 10 rings and chains on both rows.

Finish by breaking off the excess part of the paper clip and insert the remaining overlapping section one end in front and one end in back. Then use a strand of contrasting thread and lace up the front of the boot and tie a tiny bow at the top. Repeat for the second boot and tat a chain of about 30 stitches to join the two skates together.

Just an additional note, these were tatted with size 20 thread and measure about 1.25 inches. 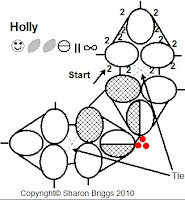 The holly leaves that were used as an excuse to hide the bar pin at back are just cloverleaves joined together. You tat the first cloverleaf and do a shoelace tie before doing the next ring or you end up with a wreath shape instead of holly. Tat the next 2 rings, one with each shuttle and the last ring as a split ring. If you want to add 3 beads between the leaves the beads need to be on the shuttle before you start. They're tiny leaves that take only a small amount of thread, so you could unwind the shuttle and add them on in the middle. Slide the beads into place and do another shoelace tie, then tat the split ring starting the second leaf and tat one ring with each shuttle, joining the 2 leaves together at the side, followed by another shoelace tie and a final cloverleaf joining the last ring to the first cloverleaf of the second leaf. This same design can be made larger just by increasing the stitch count to 3,4, 5, 6 etc. and it still seems to work.
Posted by Sharon at 12:12 AM

My 10-year-old granddaughter would love these! - she is a champion skater, her team has just won the Australian National competition in Melbourne.
I wonder whether I could make them? - perhaps after Christmas! I don't find 3-D patterns easy, so it takes me a very long time.
Thank you so much for the pattern, I haveprinted it to file away.

What a great pattern! And thanks for sharing!

Those are darling! Thanks for sharing! I'm adding them to my list of patterns I gotta tat!
~TattingChic ♥

Those are adorable, Sharon! Thanks for sharing your pattern!

Cute and seasonal! Thank you for offering the pattern!

These are too cute.. thanks for the pattern.

Perfect! My sister wears a brooch or pin everyday -- these will be just what she needs. Thanks for the pattern, Sharon.

Beautiful design, Sharon -- I saw this via Craft Gossip this AM. What a thrill!

HOW CUTE! I have made these kind of skates done in felt with paper clips. Tatting them is even BETTER! Thanks for the pattern :)

OOOOOH Lovely Many thanks for the pattern
Hugs
Joy in OZ

I thought they were just a little different from the usual Christmas tatting and that folks would like to give them a whirl. Hope you all like them.

They are lovely and would also make a nice tree ornament! Thanks for sharing the pattern.

what a great pattern! Thank you for sharing!

these skates are beautiful! thanks for sharing the pattern. i'd probably try tatting them soon.

have a great season!

What a great pattern. Thanks for sharing!

Thank you for sharing your new pattern. I like the idea of something new and refreshing!
Linda M in NM

Those are completely awesome!!!
Thanks for sharing the pattern! I can't wait to try to make them after the new year starts!!! :)

Jeff pointed out an error in the diagram where the underlying row had 2 extra rings shown on row 3 which has been corrected now.

Thank you so much! You are such a sweetheart to do this and share!

Absolutely Adorable! Thanks for sharing!

These are so very cute! I would love to make them for The Boss - she loves to ice skate and what 4 year old would not think these are terrific? Thank you for sharing the pattern.
Fox : )

They are gorgeous thank you for sharing the pattern
Margaret