I didn't get to eat chocolate and tat today, mostly because I was busy with other things, and too full of this: 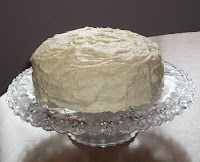 Yesterday was hubby's birthday and when I asked him what kind of cake he'd like he said lemon. So I made a cake with lemon filling and lemon icing and the darn thing took most of the day to make. On the up side, the whole house smelled lemony fresh.

Poor hubby, it was his birthday and from the second he got up things didn't go right. He woke up not feeling very well and the first thing he did in the morning was to turn my computer on for me and it just wouldn't start. While I was busy baking, hubby was busy fixing my computer. He took it apart to see what was the matter and after checking the connections it came on. That could mean that it's a bad cable or it might mean that the hard drive is going.

In between rebooting the computer I made him stop long enough to retrieve some of the more critical files. I have back ups of everything, but if I want to use it while he's working on the desktop it needs to be moved to the laptop.

We had planned on going out for supper, but he was feeling so lousy we stayed in. He enjoyed his cake, but a day spent fixing a computer isn't exactly a fun way to spend your birthday. Today we got to make a run out to the computer store and pick up a couple of cables, which he has now installed. O well, maybe tomorrow will be a better day.

Even though his birthday wasn't too good that cake looks great, and so much has been eaten!!!
Wish I could have a piece. Computers we can't live with them but its hard to live without them!