One of the ladies on HBT asked about favourite edgings. This one is mine. This is the hanky I use most often. It gets stuck in the lapel pocket or tucked in my purse and then back in the drawer. I don't bother doing a proper blocking job so it doesn't look as good as it might, but that's just me.

This variation has six small rings 8-8 but the rings are kind of crowded. I suppose if I had made the picot on the first ring really big, they would have laid flatter, but this one was done a very long time ago and I've gotten smarter since. (Smarter about tatting. Stop all the snickering in the peanut gallery.) 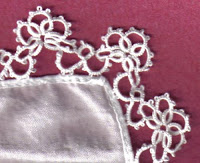 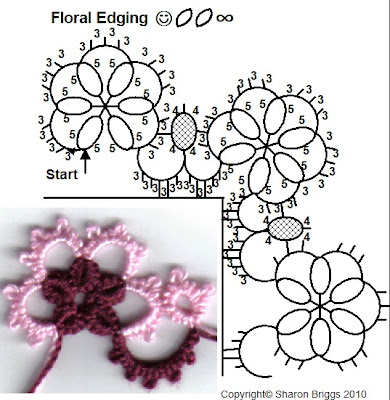 As you can see from the diagram, it easily flows around corners.

It makes a nice wide edging, almost one inch deep in size 80 thread, in one pass.

It has enough variety that it isn't mind numbing to tat.

On the other hand, it isn't something I would attach to clothing because it would need blocking with every wash and I'd rather be tatting than blocking.

Very pretty edging! Thanks for sharing the pattern.

Nice! Could you tat that one easily straight onto the hankie?
Fox : )

You can tat it directly on to the hanky, but I prefer to blind stitch edgings on. I think they look better and if the hanky wears out you can always attach the edging to another hanky. I have done edgings both ways and I just think it looks better sewn on.

That is a lovely edging! Thank you so much for sharing! :)

Thank you for this very pretty edging. And thank you for the illustrations of where to start and where to switch shuttles. This makes it so much easier to follow a pattern, with no guessing or frustration involved. You are a truly thoughtful Designer!