Where did I go wrong? Answer: Everywhere. 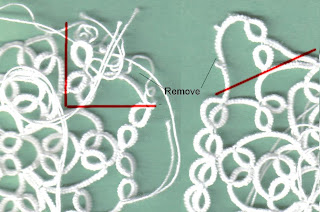 See this mess? It's enough to make you throw your shuttles across the room. Of course after you've screamed a little in frustration you have to go collect the shuttles and start fixing. Since we were talking about designing previously. I thought you'd like to see what an elegant piece of tatting looks like in process.


This picture shows both the left and the right side of a multi motif project that I've been working on. Since this will be one of those designs that's going into the newsletter I don't want to show it all right now as it will spoil the surprise. Both sides are supposed to be the same and as you can see they're not. See all those threads hanging off? They're the bits where I started over again several times.

The motif is a standard snowflake shape with 6 points. To make it into the ---- project it needs to have a straight side. When you join six pointed snowflake shapes together you have big gaps in the dip between points. While maintaining the design elements of the motif I need to fill in the gap and build the whole thing up to a straight edge. Then I need to make a somewhat solid band along the straight edge.

I worked one side the way I thought it would look good, remembering to add picots at strategic points, outward facing rings, where I needed them and got into the second pattern repeat of the first row. That's where I decided to do something different, that I thought would look better. It did, so I just carried on. I knew I'd have to fix the first bit before I did the next row but, hey that's the way it goes when you're designing on the fly.


When I got to the other end I had to invent a different arrangement for the edge of row one. I liked the second variation better so all I had to do was cut off the beginning of row one and make it the same. No problem I'd just fix that part when I got row 2 done. Six split rings into row 2 I realized that the long chain I had begun the row with wasn't going to work right.


AGAIN, I changed what I was doing and here I am at the point of tatting row 2 into row 1 in places where this part of row 1 doesn't have places. I've already cut off part of row 1 on the left and this is where I need to retro tat a split ring or 2, some chain and a couple of regular rings.

Fortunately the end on the right I only have to cut out the chain and replace it with 2 rings and 2 chains. Except that, as this is where row 1 turns and becomes row 2 I kind of think I'd like to replace the whole section, just so there aren't a bzillion ends all hidden in that one chain. Chains are easy to retro tat, but they're harder to hide ends in. Not normal ends, you understand, but the 40,000 ends you have when you need to cut out multiple bits because you were just winging it as you designed and it didn't quite work.

Stay tuned for the fixed version.
Posted by Sharon at 4:12 PM