I used to think that people who designed patterns whether they were tatting, knitting, crocheting or sewing, had some mystical ability whereby they just sat down and made things that were right the first time. When I started designing tatting, it came out of necessity. I needed flowers for my head piece and only had one pattern. One pattern, no decent book, craft, or yarn store in the neighborhood, and no time to order online and wait for delivery of books that may or may not have had suitable flower patterns in them. On a one month deadline I tatted furiously doing an assortment of variations of the one pattern I did have, and several little fill in bits to make up the rest of it. You can see the results here.

One year when we were out of town visiting family for Christmas I had my shuttles with some beads but no patterns. I had been making a lot of simple ring and chain motifs for a vest so I had that pattern memorized. It wasn't quite the right stitch count or the right shape, but it was good enough for me to make a small beaded snowflake for my mother in law. Since we were snowed in I had lots of time on my hands so I kept making snowflakes changing the stitch count and bead arrangement slightly on each one. As different family members showed up they went away with beaded snowflakes, all of them similar to this one.

The patterns for both of these and several other designs are on my web site here.

However, these designs are small. If you make a mistake with a snowflake, it's no big deal because you really haven't invested much time in it. If you make an earring pattern and it doesn't work, you can just scrap it and start again. Now, I know if you are a beginner, every ring you complete is a hard won battle, and just the idea of throwing away all that work is just incomprehensible, but trust me, tatting gets easier as you do it more and a single ring that takes you 20 minutes to make today will take you only 2 minutes a year from now.

When you get bored with snowflakes and want to move on to something a little larger, making a doily is just adding a row of edging to a snowflake. If you want a larger doily, you add another row. At this point, it starts to become more challenging for two very different reasons. First of all, each new row that you add becomes larger and you can just add edging after edging, but as you do minute adjustments to the stitch count have to be made because edgings are straight and doilies are round so the inner edge has to be smaller than the outer edge. If the outer edge isn't wide enough it will cup, but if it's too wide it will ruffle.

The second reason it becomes more difficult is that if you want the finished piece to look like a whole design instead of a bunch of rows slapped together, you have to do some planning and thinking ahead. If you have a pattern segment, an area where 2 rows together look really good, or an emerging shape that you want to see continued, you have to plan on how to create the shape or repeat the motif.

Very often doing this is a matter of trial and error. You make the best guess at how things ought to proceed and you try it. Sometimes you get it right the first try. Of course some times the first try looks awful. What is even worse, is when you are working on a motif that has several rows to it. That may mean that you won't know if your idea will work until after you have completed all of the rows. And what do you do if your idea doesn't work? You cut if off and start again.

Want to know how I developed my method of adding in new thread shown in the tutorial? Lots and lots of cut off mistakes. As a designer, I don't worry about carefully starting with pre-wound CTM shuttles. I begin with whatever half wound shuttle is handy. I pull out enough thread to get started and I add in a second half wound shuttle and keep going. Adding in new thread and hiding ends doesn't have to be something you avoid. When I add in new thread I leave the loose ends hanging until I have finished the piece. That way, if my pulling and tugging on it pulls the thread ends I'm not going to have anything pull out and if I've had to add the thread in at an awkward place and I'm concerned that the thread end will be too short and might pull out, I just sew it in and out between a few more stitches of the finished piece before cutting the ends off close to the work. 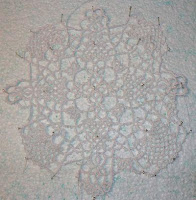 Sometimes when you like how a design is shaping up, but you're not sure if it's going to lay flat or if you're not sure what direction to take the design or where your next section needs to connect into it, blocking helps. I'm now on row 13 of this one and I'm still not sure about it other than I know it will take at least 2 more rows. It's about 7 inches across shown here, and I'm now at 10 inches across. The design will require 2 more rows which should add 1.5 inches but I was looking for a finished size of about 12 inches. If it works out it will be a happy accident since it seems to be one of those designed to fall off the shuttles without much forethought. If it doesn't, it will be about a week's worth of tatting down the drain.
Posted by Sharon at 11:44 AM

I always appreciate your posts on the philosphy of designing. You express yourself so clearly and have useful or enlightening things to say.

Thank you for your comments. A lot of the time I just blither on about whatever is on my mind at the time. I know when I started to design, just the idea that what I attempt might NOT work out, kept me from trying to design my own patterns for a long time. Modifying existing patterns to fit a new need helped me to gain some experience without having to cut off and throw out a lot of lace. It seems to me that starting with some known factors is a good way for people to stretch their wings and see if they can design their own laces without taking a lot of chances.
One of the other things I have learned is that taking the chances and making that leap into the unknown is what generally results in better and more interesting designs.

Well said Sharon. It took a while before I came to the realization that if I was tatting something and did not like where it was going I could cut it out and try again or throw the piece out and start again. My partner is shocked sometimes to see what I throw away and comment about what a waste of time but I answer with I have learned how I do not want it to look and the new piece will look better. I have reached a point with my tatting where I am more concerned with how the finished piece looks rather than just finishing the piece.

I've been enjoying your comments about designing too. I don't do a lot of designing myself though it seems I'm always changing some little detail for one reason or another.

I think if a person gets in the habit of hiding ends as they go and adding in new threads on a regular basis, it becomes less and less of an issue. It's funny how we let fear deter us from something so satisfying.

This is a very thoughtful post Sharon.
Although, I respectfully disagree with the last sentence; "If it doesn't, it will be about a week's worth of tatting down the drain."
I can't let myself believe that any tatting/designing is a waste of time...If I believe that then I will retire my shuttles.

I have 100's of hours of tatting that didn't "make the cut" in big zip lock bags...that I am hoping will someday they will come back into use.. LOL! (o:

I enjoyed your comments on designing. I do the same thing. When writing the pattern - after I've made a piece - I can never say how much thread it took because I usually just fill a shuttle and have to come up with something else to make with the rest of it. My boo-boos usually get used eventually. I have a vest that is decorated almost entirely of mistakes, or that's what they were in their first life. A few make the trash, but not as much as they used to.